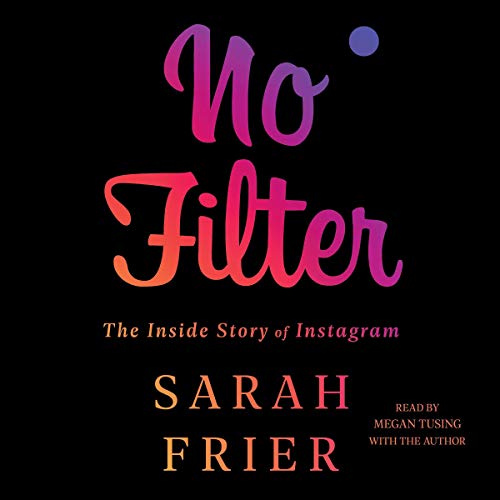 In this “sequel to The Social Network” (The New York Times), award-winning reporter Sarah Frier reveals the never-before-told story of how Instagram became the most culturally defining app of the decade.

“The most enrapturing book about Silicon Valley drama since Hatching Twitter” (Fortune), No Filter “pairs phenomenal in-depth reporting with explosive storytelling that gets to the heart of how Instagram has shaped our lives, whether you use the app or not” (The New York Times).

In 2010, Kevin Systrom and Mike Krieger released a photo-sharing app called Instagram, with one simple but irresistible feature: It would make anything you captured look more beautiful. The cofounders cultivated a community of photographers and artisans around the app, and it quickly went mainstream. In less than two years, it caught Facebook’s attention: Mark Zuckerberg bought the company for a historic $1 billion when Instagram had only 13 employees.

That might have been the end of a classic success story. But the cofounders stayed on, trying to maintain Instagram’s beauty, brand, and cachet, considering their app a separate company within the social networking giant. They urged their employees to make changes only when necessary, resisting Facebook’s grow-at-all-costs philosophy in favor of a strategy that highlighted creativity and celebrity. Just as Instagram was about to reach a billion users, Facebook’s CEO Mark Zuckerberg - once supportive of the founders’ autonomy - began to feel threatened by Instagram’s success.

Frier draws on unprecedented access - from the founders of Instagram, as well as employees, executives, and competitors; Anna Wintour of Vogue; Kris Jenner of the Kardashian-Jenner empire; and a plethora of influencers worldwide - to show how Instagram has fundamentally changed the way we show, eat, travel, and communicate, all while fighting to preserve the values which contributed to the company’s success. “Deeply reported and beautifully written” (Nick Bilton, Vanity Fair), No Filter examines how Instagram’s dominance acts as lens into our society today, highlighting our fraught relationship with technology, our desire for perfection, and the battle within tech for its most valuable commodity: our attention.

Well Told Story of the Rise and Reach of Instagram

Don’t be put off by the audio sample featuring the author’s voice reading an introduction. The book is actually perfectly narrated by Megan Tusing and one of my favorite audiobooks of the year.

No Filter (great title) is the well written and researched behind-the-scenes story of the social media giant that has changed the way we travel and “curate” our lives. Facebook values time spent on the site (quantity) more than quality. Kevin Systrom’s Instagram took the reverse approach — keeping the site simple, focused on craft and beauty, avoidance of bells and whistles that distracted and jangled the user. It worked — and then Facebook took over. The book details Systrom's vision for Instagram but the real story may be Mark Zuckerberg’s ego. Have you noticed the new "Instagram by Facebook" tag when you enter the app? Do you enjoy seeing it? No, me neither— but I guess MZ does. Both Systrom's and Zuckerberg's approaches are interesting to hear about.

Audiobook producers and publishers: you do nobody any favors when you have an author read their own introduction. We don’t need that personal touch, especially amateurish attempts that are used as samples on Audible and might mislead a listener into thinking the whole book is read as poorly. Writers, stick to writing unless there is a compelling reason to record. This introduction also has quarantine production values and seems to have been recorded in a closet.

Fortunately a wonderful reader, Megan Tusing, takes over. Hats off to Tusing for an intelligent, well paced, clear reading. I will seek out her narrations out! (No, not a friend or relation — just long time Audible addict who has come to deeply appreciate the best readers!)

As a former employee, it was great reading this! The context provided is certainly not far off from the day to day of that course company

I enjoyed this book. It left me with mixed feelings towards Facebook, Mark Zuckerberg, as well as Instagram. In general I felt it was a neutral portrayal of the facts and did not take sides with one or the other........ standing by for the Social Network Part 2

Loved the narration from both women. The book is easy to listen to and understand. I’m impressed with Frier’s thorough research! The book is super insightful about how social media affects every aspect of our lives including self acceptance, travel, politics and more. Wow...