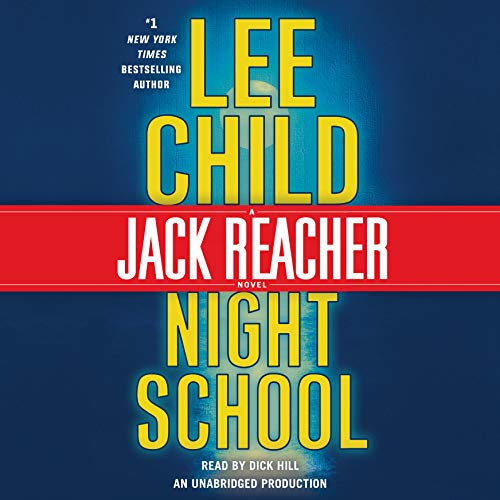 Discover the thriller series that The New York Times calls "utterly addictive". After 11 straight global number one best sellers, Lee Child sends listeners back to school with the most explosive Jack Reacher novel yet.

It's 1996, and Reacher is still in the army. In the morning they give him a medal, and in the afternoon they send him back to school. That night he's off the grid. Out of sight, out of mind.

Two other men are in the classroom - an FBI agent and a CIA analyst. Each is a first-rate operator, each is fresh off a big win, and each is wondering what the hell they are doing there.

Then they find out: A jihadist sleeper cell in Hamburg, Germany, has received an unexpected visitor - a Saudi courier seeking safe haven while waiting to rendezvous with persons unknown. A CIA asset undercover inside the cell has overheard the courier whisper a chilling message: "The American wants a hundred million dollars."

For what? And who from? Reacher and his two new friends are told to find the American. Reacher recruits the best soldier he has ever worked with: Sergeant Frances Neagley. Their mission heats up in more ways than one, while always keeping their eyes on the prize: If they don't get their man, the world will suffer an epic act of terrorism.

From Langley to Hamburg, Jalalabad to Kiev, Night School moves like a bullet through a treacherous landscape of double crosses, faked identities, and new and terrible enemies as Reacher maneuvers inside the game and outside the law.

I would have liked it better, but the stupid sex scenes had me fast forwarding thru junk that adds nothing to the story line.

double crosses and intriguing story, the reader keeps trying to figure out what it was all about.

I am a huge Jack Reacher fan. I usually buy the next book in the series the day it comes out, devour it quickly and then wait impatiently for the next offering. I had been counting the days for Night School's release and bought it as soon as the audible book was available. I can only compare my disappointment with this book by comparing it to my disappointment in watching Tom Cruise portray my beloved Jack Reacher on film. Both just don't work. I'll leave the Cruise discussion for another format. Night School starts with Reacher making his typical deductions as to why he finds himself sent to a "multiagency cooperation school" with two other successful investigators from other government agencies. Unlike past efforts, these deductions were not difficult or interesting. Unfortunately that also described the rest of the book. It plodded forward, with limited flashes of the Reacher I love. I was even indifferent to Reacher's "love interest" that came across as two people using the other for sex with little effort put forth into even a friendship. I finished the book, disappointed that the improvements I kept hoping for never came. I honestly felt more vested in the "bad guy's" plot and future plans than in Reacher's efforts to stop him. Will I read the next book in the series? Absolutely, and I will hope this was just a one off boring book and not a sign of future offering.

NOT MY FAVORITE JACK REACHER BOOK

When I start struggling with a long-awaited book by a favorire author early on, something is wrong. I had difficulty focusing on the story right away. because things seemed too quiet for Reacher's character. I could not imagine Jack Reacher sitting in a room on a too-small desk, waiting patiently, chitchatting, and swapping information with the other two students. He seldom ever shares information, especially about himself, with those whom he does not know or trust. He does trust Garber, but even there, Jack is not apt to taccept a new, unusual assignment without doing some personal vetting of his own.

Frances Neagley remains one of my favorites, but too many of the other characters seem too bland.

I have always enjoyed Dick Hill, one of the best, but some of his German accents were out of Hogan's Heroes at times.

I still remain a devoted Lee Child fan, but I think I want Reacher home again, sauntering along roads that turn complicated, sometimes mysterious, as he triumphs over evil, mostly alone or aided by trusted friends.

Below average for the Reacher series. Not fun.

The events supporting the plot were not interesting. Reacher did a couple stupid things (see spoilers). Most or the story had bad guys being “lucky” and Reacher always a minute too late. Witnesses were not helpful, more bad luck. I prefer stories with less “luck” and more smart moves and counter moves. I’m a huge fan and have read all the Reacher books. This is one of the weaker.

I always look forward to Reacher’s beat-em-up scenes. There were just two of those - some local thugs who liked to beat up strangers. The thugs were unrelated to the main bad guys. I’m ok with throwing in scenes like that but I’d prefer more fights connected to the bad guys.

SEXUAL CONTENT:
There was one scene of women performing sex acts with animals on a stage and men urinating on a woman. There were three sex scenes of Reacher with a woman, briefly described. Reacher does not do foreplay. Apparently Reacher’s women are ok with insert tab A into slot B. I’m not complaining - just describing.

CAUTION SPOILERS:
The Hamburg chief of police “C” is helping Reacher investigate. Reacher calls “B” who is in charge of traffic cops asking B to do something. B doesn’t do it and tells C that Reacher cancelled the request. That should tell Reacher not to trust B. So why does Reacher ask B to do something else for him? Of course B says he’ll do it but he doesn’t.

I used to look forward to a new Reacher novel every 12-13 months, but there have been enough recent stinkers that I'll probably get my annual Reacher fix by re-listening to some from earlier in the series. Night School could have had another protagonist with a different name (let's pick Snopes) and the only clue the listener would have that it was a Reacher novel was the handful of "Snopes said nothing" sprinkled throughout the 13+ hours. And was this storyline even believable? I'm not a weapons expert but my first guess is there is no way this could have ever happened, even in a suspended-reality world. Reacher had a couple of physical confrontations with burly antagonists but his "take no prisoners" persona was pretty much absent during most of the book. This offering by Childs wasn't quite as bad as the installment several books back when Reacher spent most of the story sitting in the back seat of a car. But it was close. Reacher fans will be disappointed by Night School. Listen to an earlier series offering instead.

Too much explanation and not enough action. Did not hold my attention like all the other Jack Reacher books. Huge fan.

After listening to several of the Jack Reacher series, I couldn't help but notice an unappealing trend. The author seems to feel it's necessary to include a rather detailed sex relationship between Reacher and whatever female is included in the story. I found this story in particular to be disappointing because he slept with his superior while at the same time stressing the inappropriateness of doing the same with his subordinate. Double standard? If I wanted a romance novel I would've bought one. In addition, the beginning of the book led you to believe the three organizations would be tackling the case together, which was very a exciting concept, but the other two "team" members were barely mentioned. It seems the author was too focused on Reacher getting the girl and extensive boring monologues. Also, the story was not fully developed and the ending was typical. This is the last Lee Childs book I will waste money and time on. If you've read one, then you've read them all.

Have you listened to any of Dick Hill’s other performances before? How does this one compare?

I usually love Jack Reacher and this reader but this book just didnt hold my attention.

Ugh! Love Reacher, Not this one.

Would you try another book from Lee Child and/or Dick Hill?

Has Night School turned you off from other books in this genre?

I usually devour the Reacher books, but this one just isn't a grabber. After listening to the first chapters for the 3rd time, I'll return it (love Audible's return policy). The book turns to white noise as my mind wanders off to where I was and what was happening around me during Y2K. After 6 chapters, 3 times, it's time to move on. Disappointing.

Sorry this is definitely the worst jack reacher

Sorry this is definitely the worst jack reacher novel i have been listening to. I came to the author by liking the narrator Dick Hill. I think he is one of the best in telling stories. I like the way of making stories beeing a part of the real live and sometimes I believe I am part of the story told. On my daily commute listing to audio books has become a part of me. Jack Reacher novels were perfect. The latest was not. Sorry. Dick Hill performs as I expected, but he cannot turn that novel into something I Would recommend. Especially the parts in the novel, where Mr Child speaks about East Germany and people coming from there I do not like. So somehow I have some doubts about the Quality of the other books and the way they were generated. Hoping for a better new one I still like Jack Reacher but he should have some flaws coming with his age. Why can't he become an old man that would make it more human. Give the character more depth. I am sure Mr. Child can do that.

The 'German dialect' Dick Hill is using us terrible. I expected more. Also the story playing in Hamburg is badly researched. Was Lee Child at any time in this city? Of all Reacher books the worst.

The german accents were not recognisable as german

The accents were not well spoken. I am german and I wouldn't have thought they were german accents speaking... more... arab. also, when they spoke german words, I often didn't understand them.
they should have used a german in the team to train the speaker a proper accent and how to say the words right.
story... interesting... but what happened to the german bad guys? what happened to Müller? To the Traffic Cop who lied about the truck?

For everyone who lived in Germany during the Cold War era this book brings back a lot of memories. The plot is not so bad either but it would have helped the story if would have been shorter, there was a lot of redundency here.
What is really annoying is the sloppy or rather nonexistent research. There are so many mistakes about life in Germany that it becomes distracting to the point where it is no more fun reading the book. I get the feeling that Mr. Child does not appreciate his european readers.