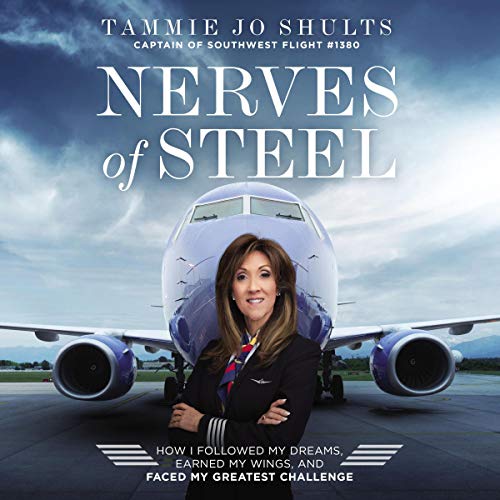 Audiobook-exclusive bonus content includes a Q&A between Tammie Jo Shults and narrator Tavia Gilbert and a recorded speech detailing the events of Flight 1380.

Nerves of Steel is the captivating true story of Tammie Jo Shults’ remarkable life - from growing up the daughter of a humble rancher, to breaking through gender barriers as one of the Navy’s first female F/A-18 Hornet pilots, to safely landing the severely crippled Southwest Airlines Flight 1380 and helping save the lives of 148 people.

Tammie Jo Shults has spent her entire life loving the skies. Though the odds were against her, she became one of the few female fighter pilots in the Navy. In 1994, after serving her country honorably for eight years, Tammie Jo left the Navy and joined Southwest Airlines in the early 1990s.

On April 17, 2018, Tammie Jo was called to service once again. Twenty minutes into a routine domestic flight, Captain Shults was faced with the unthinkable - a catastrophic engine failure in the Boeing 737 caused an explosion that severed hydraulic and fuel lines, tearing away sections of the plane, puncturing a window, and taking a woman’s life. Captain Shults and her first officer, Darren Ellisor, struggled to stabilize the aircraft.

Drawing deeply from her well of experience, Tammie Jo was able to wrestle the severely damaged 737 safely to the ground. Not originally scheduled for that flight, there is no doubt God had prepared her and placed her right where she needed to be that day.

Bring the story to life with photos available in the audiobook companion PDF download.

This is a fabulous story of a ranch girl from New Mexico. She broke barriers to become one of the Navy’s first women R/A-18 Hornet pilots to being the Captain of Southwest Airline’s flight 1380. Shults worked as a pilot fighting fires before going to work for Southwest Airlines.

The book is extremely well written. Shults tells of her early life, her battles to become a pilot to saving 148 lives on flight 1380. The story tells about a person who is talented, smart, competent and well trained. I like reading books about people who break barriers. I highly recommend this book.

The book is eight hours and twenty-seven minutes. Captain Shults does a good job narrating her own book.

What an amazing story; beautifully and transparently written! I have purchased the young reader’s edition and am giving it to my 10 year old granddaughter. As a service member’s daughter, wife, and mother, I am grateful to Captain Shults for her service to our country. As a frequent Southwest customer, and a former San Antonian, I’ll be looking for her and her husband on my future flights. Most importantly, as a Christ follower myself, I loved how she beautifully wove her faith in and through her story, just as faith is, the fabric of our stories! Well done!! A MUST read!

This was one of the best audiobooks I have ever heard. Fascinating, realistic, and uplifting from start to finish!

What a wonderful story and a truly Godly woman. I highly recommend this book; you will not be disappointed.

There is so much to glean from Tammie’s challenging experiences as a woman. Her faith in God, humility, kindness, grace and mercy are convicting especially when considering some of the people she has had to deal with over the years. I highly recommend this exciting and encouraging book!

A very incredible story of a women that always looked to forward herself in this world.

This was so encouraging and inspiring!! A great book for men and women… And parents and their kids! A great story of never giving up and being honorable all along the way.

Great story, narration could be better

I found the narration to be overly dramatic/over-acted, and the mispronunciation of some aviation terms was annoying. When Tammie Jo herself spoke it was just the opposite, real and refreshing. It’s a great story and I recommend it.

I really enjoyed the narrator. It was a big plus to have the author starting out the book and answering questions (towards the end) plus the speech that she did at the end of the book. The book was well written. I especially enjoyed her story about growing up in New Mexico. I am from New Mexico, too. I especially liked hearing about her work ethic she developed growing up on a farm. Plus, her salvation story and her walk with God through the tough times and the good times. Every Christian should hear this book. I'll go even further to say, that everyone should hear her story.

Absolutely LOVED this book! Inspiring, motivating and life changing. Persevere in whatever season your in!