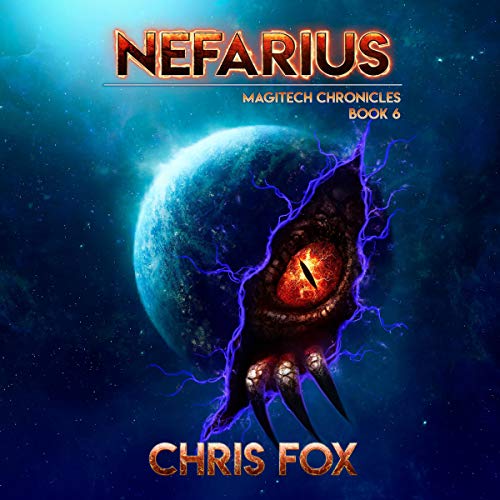 Every victory comes with a price

Krox's assault on Shaya has been foiled, but the cost was bitter. Ternus lies in ruins, its gravity doubled by a god. Shaya is a paradise, but one populated by a mere handful of survivors. Only one power strong enough to oppose Krox remains...The Last Dragonflight.

Aran and his Outriders travel to Virkon to wake Virkonna, praying that she will join the war on their side. But neither Krox nor Nebiat is the true threat. Nefarius's rebirth has been carefully orchestrated, and is finally at hand.

When the dust settles gods will die. Heroes will fall. The sector will never be the same.

excellent addition to an already rich universe. I really want to see how he ties all this up!

I love this book, I only listen to audio because the narrator gives the characters life that's my mind's voice would lack..

can't wait for the last book.

awesome can not wait for god's war
These books shows that Chris is masterful storyteller. I needed something to replace what Disney did to Star Wars.

I loved and couldn't stop listening. as usual great expansive world building and scale. some of the plot points are predicable but it's still very engaging getting there. there are just enough surprise and action to make up for it and I eagerly await the conclusion in God's war. side note: nebiat is suuccchhh a b!+@#

Stellar buildup to the conclusion with few hiccups

Everything in the story is great. All the events leading to the penultimate climax feel engaging and realistic.

Only gripe is with the sometimes jarring voicelines. I believe Ryan had to add post narration inbetween pre-recorded lines and the quality of the mic, although not terrible, is noticably different and can be distracting.

As the artwork and title strongly suggests, this book is about Nefarius's rebirth. There's plenty of intrigue, changes of allegiance, arrogant elder dragon gods and thrilling battles leading up to Nefarius's rebirth. Even with all that, it had a déjà vu similarity feeling to it.

Looking forward to an epic ending to the series, as mentioned, in Book 7.