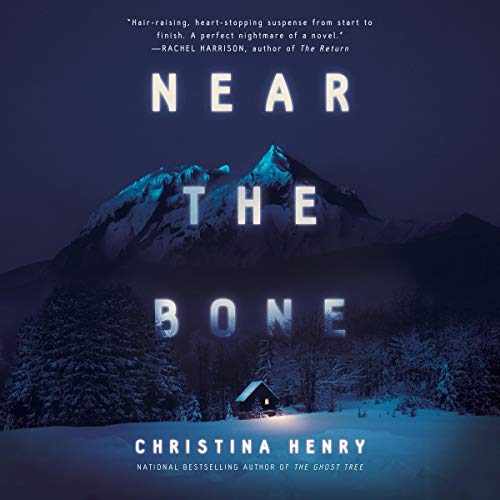 A woman trapped on a mountain attempts to survive more than one kind of monster, in a dread-inducing horror novel from the national best-selling author Christina Henry.

Mattie can't remember a time before she and William lived alone on a mountain together. She must never make him upset. But when Mattie discovers the mutilated body of a fox in the woods, she realizes that they’re not alone after all.

There’s something in the woods that wasn’t there before, something that makes strange cries in the night, something with sharp teeth and claws.

When three strangers appear on the mountaintop looking for the creature in the woods, Mattie knows their presence will anger William. Terrible things happen when William is angry.

"It's full of magic and passion and courage, set against a convincing historical backdrop.... Henry's spare, muscular prose is a delight. I loved this novel." (Louisa Morgan, author of A Secret History of Witches)

"Multiple twists keep the reader guessing, and the fluid writing is enthralling.... This is a fine addition to the shelves of any fan of children's classics and their modern subversions." (Publishers Weekly)

"This wild, unrelenting tale, full to the brim with the freedom and violence of young boys who never want to grow up, will appeal to fans of dark fantasy." (Booklist)

“Near the Bone features compelling and creative characters, descriptions of snow so realistic that they'll make you reach for a blanket and a monster so terrifying that it is sure to haunt the dreams of even the most stoic reader.... Near the Bone is a terror-ridden yet poetic hike that will leave your nerves frazzled and heart.” (BookPage)

The book itself is pretty good, but it has sections of EXCRUCIATING narration. Most of it is fine, but during the flashback scenes, the narrator (whom I was previously a big fan of) used the most terrible, whining voice for the 8-year-old main character that I had to skip forward. It was extremely over-infantalized, which I really dislike when people do for children. I have to wonder whether the narrator even tried to remember what it was like to be eight years old. You're not in diapers anymore.

I grit my teeth and tried to wait it out the best I could, but there was one section toward the end that was about 45 minutes long, and I had to skip it after fifteen. I simply could not listen to another minute of the whimpering voice from this adult narrator playing a supposed 8-year-old who sounded like a meek toddler but was characterized by the author as "brave" and "strong." The personality conveyed by the writing and the terrible, infantile voice did not correspond to each other at all. Not to mention the basic fact that when adults do baby voices it always just sounds sickening. They are NOT children, and you know it.

It would have been slightly better if the voice had only happened during child's dialogue, but no - the narrator held it for the ENTIRE chapter as part of her performance. It was so bad that I didn't care what the revelations were in that chapter. I just wanted it to stop.

Beyond that, I would say the publisher's summary gives a very good idea of what the book is going to be like.

the book is DARK! I loved it! the narrator did a fantastic job of adding suspense when needed!

I read many good reviews but found myself extremely annoyed by the main character. The ending was also unsatisfying.

I wasn't sure what to expect, but it was an enjoyable, suspenseful listen. You grow to really care about and relate to the main character.

Enjoyed the continuous suspense, slow reveal of when the story takes place and imagery of the creature. Dialogue was a bit corny/campy at times.
Would recommend.

Chilling, well paced, and unique! The creature creation was a little lazy but overall the story is really well done and Christina Henry should be proud. Lisa Flanagan did a great job narrating as well.

Solid story, although I wished it was a bit longer to draw out more of the characters. I didn’t get a chance to feel anything for a few of them, enough to care if they lived or not. Overall it was enjoyable.

The narration was good, there were a few times the whining drew out and was hard to listen to.

I flew through this book because I couldn't stand to leave the story unfinished. It was hard to listen to such disturbing and horrific events but I felt compelled to see it through. I only wish the ending was a little longer to make it more satisfying.

honestly I am sad we never got to see the creature

it was well written, def suspenseful- 4 stars out of 5. like I said would of been nice to figure out what the monster really was.