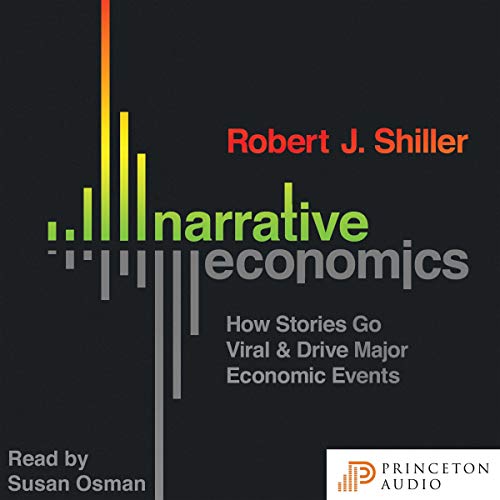 In a world in which internet troll farms attempt to influence foreign elections, can we afford to ignore the power of viral stories to affect economies? In this groundbreaking book, Nobel Prize-winning economist and New York Times best-selling author Robert Shiller offers a new way to think about the economy and economic change. Using a rich array of historical examples and data, Shiller argues that studying popular stories that affect individual and collective economic behavior - what he calls "narrative economics" - has the potential to vastly improve our ability to predict, prepare for, and lessen the damage of financial crises, recessions, depressions, and other major economic events.

Spread through the public in the form of popular stories, ideas can go viral and move markets - whether it's the belief that tech stocks can only go up, that housing prices never fall, or that some firms are too big to fail. Whether true or false, stories like these - transmitted by word of mouth, by the news media, and increasingly by social media - drive the economy by driving our decisions about how and where to invest, how much to spend and save, and more. But despite the obvious importance of such stories, most economists have paid little attention to them. Narrative Economics sets out to change that by laying the foundation for a way of understanding how stories help propel economic events that have had led to war, mass unemployment, and increased inequality.

The stories people tell - about economic confidence or panic, housing booms, the American dream, or Bitcoin - affect economic outcomes. Narrative Economics explains how we can begin to take these stories seriously. It may be Robert Shiller's most important book to date.

I am a huge fan of Robert Shiller, so much so that I gutted my way through nearly 8 hours of some of the most depressingly delivered narration I have ever heard. Particularly regarding economics, it’s critical to have a narrator who can inspire and reinforce interest in the topics at hand. This narrator fails terribly. It’s as if the publisher, seeing the topic of the book, decreed that a Brit would be necessary, to impart “gravitas”, or something. But the end result is to make the content impenetrable and repellent, which is too bad of course and I finally said “Enough. Robert Shiller’s time is so valuable he can’t record his own audio book, then why I am I valuing my time so cheaply in return?”

Save your time and money. Buy the printed book or, if you must, enjoy something else.

The narrator slurs his words together and is a very nasally voice that is incredibly hard to listen to. Also the recording itself sounds like it was recorded on a handle recorder setup to its lowest recording setting. Really poor quality reading and recording, skip it.

I took Shiller’s Coursera and loved his style of teaching and thinking. This book seemed very original. It’s great to hear somewhere older and wiser remark on the arbitrary trends of today....bitcoin.

You're going to hate listening to this audiobook. you're going to deal with technical economic issues which is fine, but then to add an obnoxious pretentious British voice as the narrator is a calamity. I couldn't enjoy the book because I had to translate the British accent which took an inordinate amount of brain power. I can't tell you if the book is good or bad just that listening to it is extremely annoying.

Slow middle, picks up after

Really slows down a bit in the early middle, but if you power through it is a really useful book. Lots of the topics covered are timeless, and seem especially relevant today. (Viral spread of ideas anyone?)

I would of enjoyed the author reading this one. I have heard him didcuss the book and we lost something when he was not the voice

Schiller does a wonderful job of explaining how the story around economic events play into them. A must read for anyone trying to understand the world today.

I'll start with the narrator. For the most part I enjoyed her flow, voice, and reading style. The only thing that threw me off is when Schiller made personal references and i had to remember it was a male that wrote the book.

This is my first time reading Schiller's work. i can appreciate his ability to bring in various historical accounts and date to convey the creation and development of narratives. On a personal note, this book was recommended at a great time because Schiller touches on something I've been arguing about in the #massadoption of technology (specifically blockchain technology). Point is my theory isn't totally far fetched.

The downside for me is that most of Schiller references and #POV are based on a very western (#American) narrative. And arguably have a white male bias. He does address his scope of view in the beginning. but i would have still like to get more insight on how econimic events look for people out side the US. granted that would've probably made the listen more than a 11hr listen. i would appreciate the cross referencing aspect.

In the overall i found it worth the listening and found the subject very interesting. But i still felt there was a level of academic dryness to it.

How stories change the world

A fascinating historical look at how what people say to one another drives the economy!