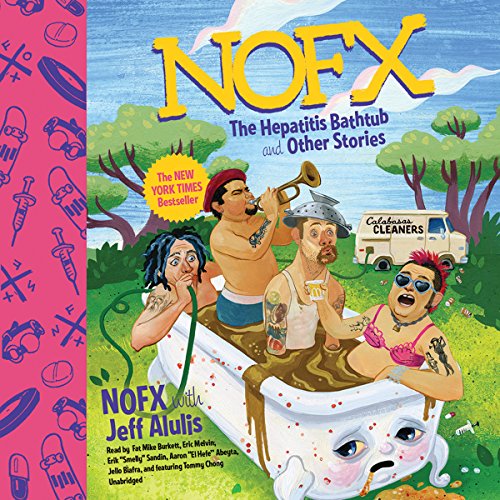 NOFX: The Hepatitis Bathtub and Other Stories is the first tell-all autobiography from one of the world's most influential and controversial punk bands. Fans and non-fans alike will be shocked by the stories of murder, suicide, addiction, counterfeiting, riots, bondage, terminal illness, the Yakuza, and drinking pee. Told from the perspective of each of the band's members, this audiobook looks back at more than 30 years of comedy, tragedy, and completely inexplicable success.

Deep, sad, funny, inspirational, scary, educational, insightful, disgusting, and one of the most addictive books I've listened to yet. If you are a fan of NOFX it is deeply satisfying to hear where they came from and what they've been through. Extremely well written and well spoken. Thanks for sharing guys! Love you! Glad you are all still alive and doing well.

One Hell of a History Lesson!

I've been a fan of NOFX since 1992. They, along with The Dead Milkmen, remain the two most influential punk bands in my life. In this book, I can see exactly why they resonated so strongly with me. This book is essentially my remembering of the early days in the punk rock scene. Go hard, go fast and f**k you if you don't like it, it's not for you anyways.

I was initially unsure how much of the narration I could handle. The first few chapters, as read by the band members, seemed disjointed and it was painfully obvious they were not practiced in reading for others. However, by the end of the book, it was apparent their stories could have been told no other way. Had anyone other than the band themselves tried to read their stories, it would have come off as unbelievable and the book would have suffered.

The stories they share made me laugh and also feel deeply ashamed for what I witnessed, engaged in, or turned a blind eye to. With the current atmosphere in society, I imagine this book would have never been distributed had they released it today, and we would have been less for it. The band takes a look at its history and with few apologies, owns up to the truth of what it all meant, or didn't mean, depending on the story.

Mike's ability to be honest and upfront about his sexuality was both surprising and pretty f**king brave. The moments they opened up about their families were particularly moving. However, the standout story in the book to me, was Smelly's story of decline, infinite rock bottoms, and ultimate survival. The openness with which he discusses the impact and environment surrounding heroin was honest and unsettling. The only other author I have heard speak so bluntly on what heroin can do is Donald Goines. At so many moments, Erik's story brought me to tears.

I learned that some of my favorite songs were not about what I had imagined in my own head. Getting to hear the actual inspiration behind stories like Bob offered a fresh perspective on the band.

Ultimately, I think that anyone who wasn't part of the punk rock scene in the 90's will struggle to understand or connect with everything in this book. But for those of us who were there, it will ring true and bring back many memories of our own exploits, both good and bad. The book, like the scene, will be different for each person, but no matter who reads it, the window it offers into the lives of NOFX will be a welcome telling of their history, their struggles, and their improbable success going against the trends and doing s**t their own way. Don't we all wish we could be so free?

Since the band (and a couple of friends) read the their own book, it was really engaging when they would tell the stories of the small happenings a events, that lead to NOFX as we know them. Being a fan of the band, this was a treat for me. But, if anything, the tales are fun, scary and put things into perspective with early punk culture. The guys putting out this book had to take courage and some long lost emotional stress. Several parts of this book I feel will stick with me for some time. Just because a few topics hit pretty close to home. A great book for anyone. ...maybe anyone.

Liked it up to family death and butt plugs.

Lost me at butt plugs. Like I can hang for a bit, but it felt like the last 10% of the book was less about NOFX, and more about Mike's sexual lifestyle. Great book up until that point.

This book is down for the cause homes!!

Absolutely loved it!! It's like Eric Melvin touched my souls, Smelly Almost brought me to tears, El Jefe made think about my own Mexican family growing up and fat Mike mad me laugh and think about my own vices. Jello and Tommy were great and sincere in there readings. I Fucking love this book and it makes me appreciate NOFX even more. Thank you for both guys, you all did great reading your parts!!

beautiful book. I never did understand that there were people, much less famous people I looked up to who felt similar to me.

I used to be a big NOFX but fast Mike started getting on my nerves with his big mouth. I gave this one a chance anyways and it was really good. it gives insight to who these guys really are

I Laughed, I Cried, I Learned.

This is an amazing book. I heard of NOFX, but never knew their story. This book hooks you from the first chapter. Makes you wonder why and builds from that curiosity.

If you ever wondered what it's like being in a band. I can say from first hand experience. This book is it.

Disturbing, funny with some sad moments. I couldn't stop listening. And because you are requiring 15 words, here you go.

Very interesting book with loads of great stories. I recommend it very highly. Worth the listen for sure.

just read this book, it's amazing!

If you're a nofx fan or just interrested into punk, you really should read this book!

Even when you're not a fan it will entertain you.

i red the book about three times, it never gets old.
They made a great job!👍

So brutally honest it hurts

This is not an easy story to listen to but a true account of punk.