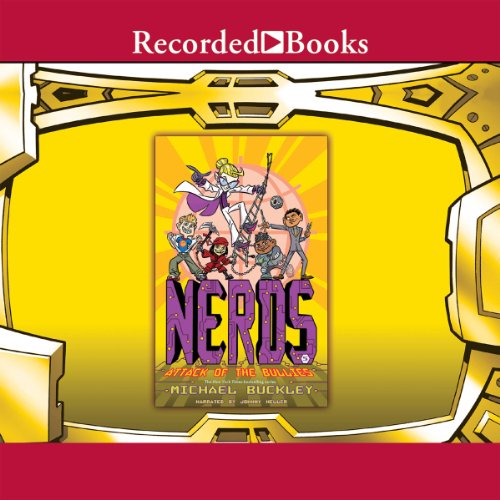 The grand finale to the best-selling series, Attack of the BULLIES stars Ruby Peet, aka Agent Pufferfish, the team captain with super nanobyte-enhanced allergies. Pufferfish leads the team in their latest case: the kidnapping of the president' s daughter. But the NERDS discover she hasn' t been kidnapped - she' s been recruited. Their former librarian, Ms. Holiday, has started a rival organization called BULLIES, who each have their own nanobyte-enhanced upgrades. The BULLIES' plan: go back in time to make sure NERDS never existed! When Ruby' s teammates begin to vanish one by one, she enlists Agent Brand and Heathcliff Hodges to go back to the 1970s and help the original nerdy secret agents make sure that the future is not erased from existence! Attack of the BULLIES promises action, humor, and a dramatic conclusion to the series.

Another entry in a funny series

What made the experience of listening to NERDS 5 the most enjoyable?

Great narrator and a funny book. My 12 year old laughed out loud.

What other book might you compare NERDS 5 to and why?

of course, it is a lot like the other books in the NERDS series.

He's a wonderful narrator for kids' books, and particularly fine with funny ones like this.

Book yet it was the best book I love it. Was amazing I loved it