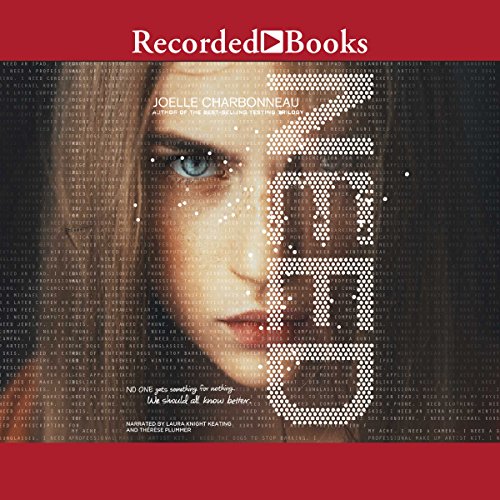 "No one gets something for nothing. We all should know better." Teenagers at Wisconsin's Nottawa High School are drawn deeper into a social networking site that promises to grant their every need...regardless of the consequences. Soon the site turns sinister, with simple pranks escalating to malicious crimes. The body count rises.

Please note: By submitting this review you confirm you have read and agree to our Review Guidelines. The processing of reviews may take several days, so we appreciate your patience. Audible posts reviews at its discretion. If the submitted review does not meet our guidelines, you will be notified via email.

Yeah, I went through it. Scared not to.
This concept and story are important, especially for young people.

The story:
Predictable, especially the reveal. There are a lot of good characters but many of them felt somewhat interchangeable, and didn't get to shine until the very end.

Narrators: Laura Knight Keating and Therese Plummer are two of the best narrators I listened to (along with Andi Arndt and Julia Whelan). They made it feel real, and I hope I bump into them in future audiobooks.

the most dimwitted wrighting I've ever heard

and this lady seams obsessed with suicide, it a thread in each of her books. the capper was a teen FPS player , turn mercenary and mass murderer. smdh

WOW so great and recommend!!

This book was so great and suspenseful. I love how the book ended and the way it was read!

I honestly love this story. The narrators and actors are very expressing and make the story more interesting. I really enjoyed this overall! <3

Do you NEED to read this? No, but go on.

A decent YA thriller in the same category as Jeanne Ryan’s “Nerve”, but not in the same class. Most of the characters in “Need” are half-baked and unlikable. I can’t even say I liked Kaylee very much, but she was by far the most relatable. I was surprised when the major villain was revealed, and I almost always figure these things out well in advance, so points for that... but even then, I found the climax and resolution underwhelming. I’d recommend this story to someone preparing for a long drive or a series of long walks—it will keep your attention and won’t bore you—just don’t expect too much.

That was unexpected. I really enjoyed this book and the commentary it presents on teenage dependence on social media. A bit of glimpse of an orchestrated butterfly effect...

the book itself was amazing and I liked the narrator. she did a great job

The voice of Kaylee needed more fluctuation when it came to voicing the males in her story. My students did not like the Kaylee narration, especially when it came to D.J.

What was one of the most memorable moments of NEED?

What didn’t you like about Laura Knight Keating and Therese Plummer ’s performance?

I did not like Kaylee's voice (I am unsure who voiced which characters.). I pictured Kaylee with a far more dramatic flair. Especially considering all of the things she did prior to her NEED request to get her brother the help he needed. I think the narrator for Kaylee should have played up Kaylee's personality far more than she did.

I also think it would have been awesome to get a male to narrate the parts of the guys in the book. This book is already intricately layered, adding a male narrator would have added the final piece to make the audio awesome.

If you could play editor, what scene or scenes would you have cut from NEED?

I wouldn't have cut any. I would have developed some characters a bit more though, such as Ethan and Sydney.

An excellent fast-paced novel that is different from other novels I've listened to. I highly recommend it.