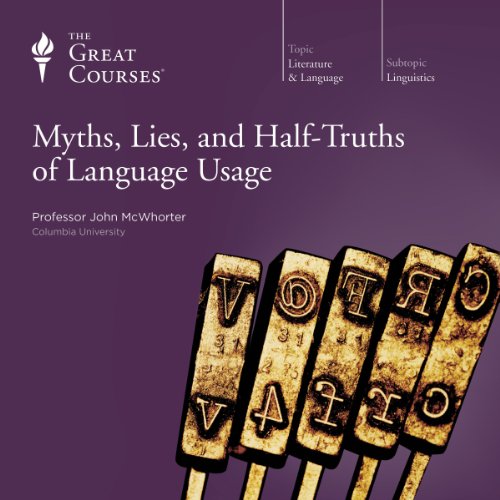 Conventional wisdom suggests English is going to the dogs, that bad grammar, slang, and illogical constructions signal a decline in standards of usage - to say nothing of the corruption wrought by email and text messages.

But English is a complicated, marvelous language. Far from being a language in decline, English is the product of surprisingly varied linguistic forces, some of which have only recently come to light. And these forces continue to push English in exciting new directions.

These 24 eye-opening lectures dispel the cloud of confusion that clings to English, giving you a crystal-clear view of why we use it the way we do and where it fits into the diverse languages of the world. Like an archaeologist sifting through clues to a vanished civilization, you'll uncover the many features of English that sound normal to a native speaker but that linguists find puzzling and also revealing.

For example, the only languages that use "do" the way English does (as in "do not walk") are the Celtic languages such as Welsh, which were spoken by people who lived among the early English and influenced their language in many subtle ways.

These examples and many more represent a few of the flash points in English's long history of defying rules, a process that occurs in all languages. You'll come away from this course with every reason to be a proud, informed, and more self-aware speaker of English.

This course will turn you into a linguistics fan!

I never had any particular interest in linguistics, but I LOVE The Great Courses, and if you follow their Facebook page, you learn pretty quickly that two linguistics professors (John McWhorter and Anne Curzan) are constantly getting rave recommendations from listeners.

As a result, I have now taken the plunge, and thanks to The Great Courses, I am in danger of becoming a linguistics nut.

The title of the course (Myths, Lies, and Half-truths of Language Usage) is really just a provocative way to say that this comprehensive survey of the English language is guaranteed to bust any preconceptions you had about "proper" English.

John McWhorter is quick-witted, quirky, and clearly an expert in his field. Unlike with some professors, you won't be tempted to use the speed controls on your Audible app to speed him up. He moves quickly and packs a ton of information, stories, and silly asides into every 30 minute lecture. You get your money's worth.

Professor McWhorter covers the complete history of how English evolved to it's present-day state (or states, to be more accurate), making the point repeatedly that modern English is itself filled with shortcuts and bastardizations of its ancestors, all for the sake of economy and clarity.

You'll learn that prescriptivist notions of "proper" English never even emerged until the arrival of the printing press, and the first dictionaries didn't come until centuries later. So the notion that proper language usage is a fixed thing, frozen in time, is a relatively new phenomenon.

So be warned. If you are looking to learn what's "proper," you will likely be frustrated by McWhorter or any of the other linguistics offerings from The Great Courses. McWhorter repeatedly hammers home the point that language is fluid, and like it or not, all the grammar teachers in the world could never stop language in it's tracks.

Overall, a fun listen. The Great Courses has three other titles by McWhorter, and I will be buying them all!

I’ve recently listened to a few similar books on the same subject: English Grammar Boot Camp (the Great Courses), The Story of Human Language (the Great Courses) and Words and Rules (Steven Pinker) so this book was at a slight disadvantage because it would inevitably cover some of the same material, and indeed it did.

However, there was a decent amount of new stuff in there that I hadn’t come across before. For example, I hadn’t known that English was a very unusual language for its use of the ‘meaningless do’. When we ask a question we don’t say ‘play you the piano?’ we say ‘do you play the piano?’ As English speakers this sounds very familiar and normal, but it is actually a very rare feature of languages globally, and is one of the few things left to English by the old Celtic languages spoken by the original inhabitants of the British Isles. The same goes for our use of the present progressive tense: When someone asks us what we are doing we don’t say ‘I watch TV’, or ‘I peel potatoes’ we say ‘I am watching TV’ or ‘I am peeling potatoes’. Again, this seems normal to us but again it is rare and this use of the present progressive tense is another relic of Celtic times.

The narrator, John McWhorter, is brilliant and funny, and doesn’t have any problem bringing a relatively dry subject to life. I was familiar with him from listening to the linguistics podcast ‘Lexicon Valley’, which I also recommend.

He looks at a whole screed of other topics, such as double negatives and reflexive verbs and he takes a light-hearted pop at prescriptive English Grammar Manuals such as Strunk and White. Overall the audiobook is thoroughly entertaining and well worth a listen.

The "funnest" book on language ever

Prof. McWhorter maintains that "funnest" is not a word you can use, but I'll bet he knows what I mean.

Maybe the best thing I can say about this lecture series is that, like a very good and compelling novel, I found myself driving around the block or listening in the garage because I found it so engaging. On one hand, I didn't want it to end, but on the other, I did so that I could write a glowing review.

So many interesting tidbits about English and other languages and how words and expressions evolved. He gives great examples - some very humorous. He explains the difference between spoken and written language; in all languages, spoken is much more casual and less rigid than written, which allows you to plan, go back and re-write and edit (as I'm dong now) what's being written. He maintains that language is always evolving and will always continue to, and that the new electronic ways of communicating - e-mail, texting, IM, are really more like speach than writing. He finds no linguistic problem with these forms nor does he feel that they will affect the written language in a bad way.

He's very entertaining, easy to understand and skirts around socially offensive "bad" words without actually saying them, but in a very funny way.

I'll mention the applause between lectures as I did for another of the Great Courses Lecture series. I think it should be done away with - it's distracting.

Fantastic! Never expected this to be so much fun

McWhorter is one of the best teachers I have ever had.

Even if you never wanted to learn about the English language, you should listen to this book.

There are so many things in it about history, social history, language (of course), and grammar.

And I will try to use the phrase "obsessive progressive" as much as I can in daily life. (You'll understand when you listen to the book.)

Please, don't let the fact that this is a language course stop you. It's well worth every minute. (Although I confess I listen at 1.5 speed, but his voice doesn't suffer.)

Anyone who enjoys bill Bryson will enjoy Professor McWhorter

If you've studied some linguistics, skip it

If you haven't had any linguistics, go for it. You'll find this course series worth the time. Prof. McWhorter has a very natural lecture style and can convey the concepts clearly and interestingly.

If you've studied some linguistics (e.g., if you've take a 100-level university linguistics survey course already), you've probably already been exposed to all the content in this lecture series.

I usually enjoy learning about the history of the English language and it’s usage. I was disappointed with Myths, Lies, and Half-Truths of Language Usage. John McWhorter certainly has a wealth of knowledge and he wants everyone to know it. His information might have been interesting if he had not given so many examples that were peripheral to the topic. I found his train of thought hard to follow because of the over-detailed examples. If anyone is interested in the history of the English language, a podcast by Kevin Stroud called The History fo the English Language Podcast is available from Apple Podcasts. It is quite informative and clearly presented.

This course was very interesting! The lecturer takes a rather non-traditional view about modern English language usage. He argues that several common grammar rules are based on preference rather than any sort of logic. His arguments are detailed and informative. He also provides some background on many other languages and explains how the English language is related. There are so many things that I learned about language during this course!

What made the experience of listening to Myths, Lies, and Half-Truths of Language Usage the most enjoyable?

Well, this professor has a gift, he is able to talk, no matter what he says, you will not want to stop listening to him.

What other book might you compare Myths, Lies, and Half-Truths of Language Usage to and why?

The History of language

Which character – as performed by Professor John McWhorter – was your favorite?

There are not characters here, these are lectures, but Professor John McWhorter is a character on his own, I love when he pronounces different languages, his voice changes completely

not the kind of cry or laugh reaction, but makes you think, a lot.

the only danger I have with this professor is to believe everything he stays, but after thinking coldly, there are some points which could raise some discussion, pity this is a recording and I do not have the chance to ask him

This is undoubtedly the best course and possibly the best audible product I've ever listened to. Not only is the content fascinating, but Professor McWhorter is an absolute genius as a lecturer. He explains sometimes difficult concepts with crystal clarity and spices things up with funny illustrations, humorous asides and even an occasional song.

Enjoyed thoroughly - you will enjoy this professor

This is the second lecture I purchased from professor McWhorter. If you are a believer in the philosophy "take classes from great teachers, regardless of the subject" you will not be dissapointed. I listened to one of his other linguistic lectures and I was so happy with his performance and presentation I was compelled to try one of his other lectures. He is able to convey a great deal of information in a casual and entertaining series. One of the best I have listened to from learning company.