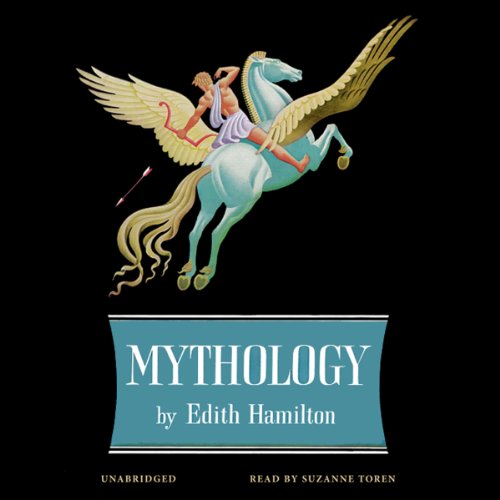 Since its original publication by Little, Brown and Company, in 1942, Edith Hamilton's Mythology has sold millions of copies throughout the world and established itself as a perennial best-seller in its various available formats. Mythology succeeds like no other audiobook in bringing to life for the modern listener the Greek, Roman, and Norse myths and legends that are the keystone of Western culture - the stories of gods and heroes that have inspired human creativity from antiquity to the present.

Edith Hamilton, who was a classicist, studied and wrote mainly about the way the Greek culture influenced the rest of the development of western thought and the arts. This book, written in 1942, is now a classic itself in a sense, as her views have had influence in this field since her lifetime of study of western thought.

This book is her choice of myths that she believed exemplified her views. The first chapter is interesting, as she outlines her way of thinking about the place of the myths to the Greeks at the time, and explains how she has chosen various versions from particular poets and what she believes the stories meant to each of them when they were first recorded.

The book begins with the creation myths, then goes on through the better known (or more influential ones) and concludes with some lesser known ones that have had an influence on western culture. While Hamilton's viewpoints are not the only ones about the place of myths in our culture, they nevertheless have had a great impact on how students of western civilization have thought about them since her work came out.

The narrator has a good quality of tone and pacing for the reading, but they are just matter-of-factly read, without too much emotional tone (which is right for these myths, in this context). Readers should consider being very familiar with all the world's great myths and stories, because they form a framework for much of the thought and literature we have created since. This book can be picked up and read anywhere, but if you desire the logical way she lays them out, suggest reading from beginning.

An entertaining and educational listen. Sources for each of the stories presented are clearly discussed. The reader delivers the content well. The table of contents is not included in the accompanying pdf, so I'm adding it here for those interested. The full text is available at the Internet Archive, the source for the following TOC.

The Gods, the Creation, and the Earliest Heroes

The Titans and the Twelve Great
Olympians 24

3 How the World and Mankind Were

The Great Heroes before the Trojan War

PART FOUR: The Heroes of the Trojan War

Prologue: The Judgment of Paris 179
The Trojan War 179

Part One: From Troy to Italy 220
Part Two: The Descent into the Lower
World 226

A great primer on Greek and Roman mythology. Explained and told in plain English. It covers the poems and plays. A good introduction and review. The narrator does a superb job.

Mythology by Edith Hamilton is a great book Greek Mythology novices (like me). It requires a certain amount of patience to stay with this book as it refers to a multitude of difficult to pronounce and even more difficult to remember names of characters from the Greek Mythology and of course there is the issue of remembering names of the same characters in Latin and in Greek. Having said that, this book does a very good job of introducing the different characters and their contexts to the reader. It also cross references characters playing small roles in a story to when to when their own stories are being told. The part that I probably enjoyed the most was the way Edith sets stage for the reader to understand the collective ideology and thought process of the times when these stories were told and the poets who told these stories in helping the reader understand and put in perspective the relative grandeur and treatment of the characters and incidents in the different stories.
Edith has picked up different stories in terms of detail, importance, grandeur and familiarity to the general population to define the sequence in which the book flows. What this results in is that the chronology of the events is severely impacted. The reader does have to stay alert in order to place certain events in the overall chronology of the single mythological fabric that is being woven by the writer. One can of course choose to ignore the mythology altogether and regale in the mysteries and the characters and their tales.
I would definitely recommend this one to any reader who is interested in the mythologies and wants a not too heavy introduction to some of the most seminal work from the 1000 years leading up to the advent of Christianity.

Important but not easy book

The beginning of this is very boring and I found it hard to follow. That could be because I was listening to it but I don't think so. It got much better and I learned a lot. Mostly it made me want to read other Mythology books.

If you want to win at your local trivia night, this is a book you should listen to. I've read it multiple times and never tire of hearing about all the great mythologies.

What did you love best about Mythology?

Considering that this book assembles many of the Greek and Roman myths and presents them as part of one narrative, I thought the narrative arc was impressive. It did not feel choppy, but quite organic.

There were many interesting characters in this collection. My favorite is probably Perseus. But many of the myths have interesting protagonists and antagonists.

It was very well read.

Liked the book, but thought the section on Norse mythology a bit sparse. I understand that Norse mythology isn't near as robust as Greek, but the author could have at least gone over Beowulf and the Nibelungenlied.

I’m very surprised that I didn’t like this book. The fault may completely lie with the narrator. Too slow very easy to understand but dull. I just couldn’t get into it. I only made it 2hrs.

The reader is dry and the book is nothing but a dry dump of data. there's no really content. if you want legends do not buy this.