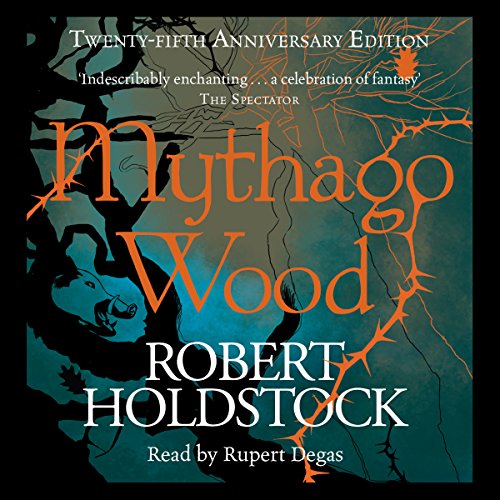 Winner of the World Fantasy Award for Best Novel.

Mythago Wood is regarded as one of the finest fantasy novels of the 20th century.

Deep within the wildwood lies a place of myth and mystery, from which few return, and of those few, none remain unchanged. Ryhope Wood may look like a three-mile-square fenced-in wood in rural Herefordshire on the outside, but inside, it is a primeval, intricate labyrinth of trees, impossibly huge, unforgettable... and stronger than time itself.

Stephen Huxley has already lost his father to the mysteries of Ryhope Wood. On his return from the Second World War, he finds his brother, Christopher, is also in thrall to the mysterious wood, wherein lies a realm where mythic archetypes grow flesh and blood, where love and beauty haunt your dreams, and in promises of freedom lies the sanctuary of insanity....

A nice mystery/fantasy book, easy to listen. I preferred to listen it as my daily evening story.

Finally, Mythago Wood. Robert Holdstock’s classic tale presented as an audiobook with the wonderful Rupert Degas commissioned to do the narration. Let’s hope Orion/Audible will produce the remaining Mythago books as well!

A must for every fantasy/mythology lover

I read the book many years ago. Loved it then. Loved it again. Holdstock created an intoxicating world of deep myth. You’d long for Mythago woods to really exist. A story that is equally entertaining, thrilling and gives you food for thought while listening to an absolutely gifted narrator. Well done!