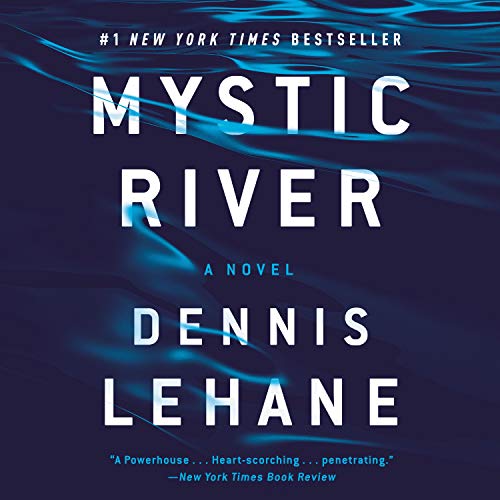 When they were children, Sean Devine, Jimmy Marcus, and Dave Boyle were friends. But then a strange car drove up their street. One boy got in the car, two did not, and something terrible happened - something that ended their friendship and changed the boys forever. Twenty-five years later, Sean is a homicide detective. Jimmy is an ex-con. And Dave is trying to hold his marriage together and keep his demons at bay - demons that urge him to do horrific things.

When Jimmy's daughter is murdered, Sean is assigned to the case. His investigation brings him into conflict with Jimmy, who finds his old criminal impulses tempt him to solve the crime with brutal justice. And then there is Dave, who came home the night Jimmy's daughter died covered in someone else's blood. While Sean attempts to use the law to return peace and order to the neighborhood, Jimmy finds his need for vengeance pushing him ever closer to a moral abyss from which he won't be able to return.

Punches you in the face!

I hit a dry spell in finding new novels that would engage my interest. As a result, I started searching for notable American novels I missed during the height of their popularity. Mystic River shows up on every book critic’s top 25 lists of great American modern novels. Since I had not seen the movie, I gave it a listen.

It would be misleading to characterize Mystic River (MR) as a murder mystery or detective story. Any reader who watched more than three episodes of “Law & Order” will figure out the mystery of MR by the end of the fourth chapter. The value of MR comes in the author’s, Dennis Lahane, skills at making the reader feel the anguish of the characters and intensity of the storyline. MR is a dark serious drama devoid of humor. The three main characters carry a deep sense of misery and psychological trauma that cannot be conventionally expressed due the machismo cultural standards of South Boston. The culture of machismo results in a basic breakdown in social communication, isolation, rejection, and pointless death. Lahane expertly takes the reader into an insular community where most of us would rarely venture. MR is always moving toward the conclusion, where the reader feels a tension similar to watching a car speeding obliviously in the wrong direction of a busy one way street and waiting for the eventual crash. The drama of the book occurs as characters rush to judgments based on community standards and spurious information.

Although the audio book runs roughly 15 hours, every detail is important to understanding the eventual finale. The interplay between the environment and characters makes this book special. After completing the book I watched the film. MR the movie, directed by Clint Eastwood, is almost 100% faithful to the book in plot and tone. I recommend reading MR instead of watching the film to capture Lahane’s masterful writing. However, if you already watched the film, the book will lose much of its punch.

The movie was great; this is even better!

I love Dennis Lehane and have listed to several books narrated by Scott Brick. Neither let me down. Excellent narration. Excellent crime and psychological thriller. I thought the three main characters were well developed and I really got to know them. I had seen the movie and still I couldn't put it down. I highly recommend this audiobook. It will stick with you a long time.

fantastic — except for one big thing

The setting, the characters, the procedural — all wonderfully detailed and intricate. Scott Brick does a good job narrating, although there were some moments were inflections were stated in the novel but not executed in the acting. All in all though, an enjoyable read.

However, I almost gave the story 1 star because it absolutely infuriated me on one repeated statement that was treated as fact by Lehane: according to the characters and dialogue of Mystic River, all molested children go on to be child molestors themselves. Lehane goes to great lengths to state that it’s a disease, even comparing it to being bitten by a vampire and turned into one of those evil creatures.

As someone who was molested as a child, I found this a cruel treatment and MISINFORMATION. Do NOT be spreading these lies, Lehane. Shame on the author for that. It made me so angry I almost didn’t finish the book, and I’m only giving it 3 stars as a nod towards all of the other great parts of this novel. But that one...that one is a dangerous lie and an awful stereotype to spread. The author and his editor should have cut that bull out.

One of the best American crime novels ever written

No less a person than James Lee Burke, who is now eighty-one and is the dean of American crime novelists, has said that Mystic River is one of the best books of its kind ever written (at least I know from whom to crib my opinions). Certainly reasonable people can differ, but in this case I feel that criticizing a book of this stature is risky business, indeed. Every aspect of the work of both Lehane and Brick is stunning here. As to the reviewer who said that he knew "whodunnit" by the end of Chapter 4: Sir, I challenge you to a duel. Read it again.
One complaint that is warranted, in my view, is the total absence of humor. I guess one can argue that the subject matter of the book is so serious that humor would be misplaced. However, I have to admit that the books that star Kenzie and Gennaro are a lot more fun. The humor, the jokes flying between the partners, the sizzling sexual tension in whatever room they happen to be: that is great fun stuff. There is none of that here.
The catastrophic event that sets up the whole book occurs at the end of the first chapter, and almost everything else that post-dates that horrible tragedy has roots in the car that drives Dave Boyle away. Dave and Sean Levine and Jimmy Marcus, childhood chums growing up in suburban Boston, grow up to adulthood through the book: they go to school, one goes to prison, one gets divorced, children are born, one is murdered: just regular suburban lives, I guess. Families get larger with the birth of children, and the Flats neighborhood gets fleshed out in carefully imagined ways, a bit more detailed than the slightly better-off Point, on the other side of the tracks. The book picks up narrative power as it goes along. We see deeply inside a couple of marriages, the kind of thing which is not usually tackled by lesser authors in this genre. Lehane writes about people and the relationships between and among them with grace and insight and understanding of the love and the aggression driving each one forward. Secrets are kept, several of them of catastrophic importance. We become deeply involved in the marriage of Jimmy and Annabeth, and also of Dave and Celeste, and we get to know the lives of their kids. Fatherhood particularly is examined with a microscope. As in lots of "cops and robbers" books, the fine grey lines defining the boundaries between the "good" guys and the "bad" guys is often almost impossible to locate.
In my view Mr. Lehane is up there among the finest of American crime writers. If you are at all interested in reading the work of his companions in this elite group, I would recommend Mr. Burke, of course, plus Tom Perry, Tim Hallinan, Robert Crais (the funniest of them, hands down) and John Lescroart. Not all of those guys will ring your bell each time out, but there is a lot of truly great stuff there. Checkitout.

Would you listen to Mystic River again? Why?

Absolutely. I think this book was THE best book I've ever listened to! I first heard Scott Brick read The Passage (by Justin Cronin) and really enjoyed that, so his voice was familiar to me. I'd never "read" anything by Dennis Lehane but I had seen the movie Mystic River, a few times (it's also one of my favorite movies!) I'd NEVER really cared for Sean Penn until I saw him in this - he was fantastic!

What other book might you compare Mystic River to and why?

So far I have no comparison. I love most of Stephen King's work as well as the Jack Reacher Series by Lee Child, but Mystic River just took that top slot for me. Now I'm looking into reading other books by Dennis - I want to know if he writes as well in his other books, and if he does, I'll be totally thrilled!

Have you listened to any of Scott Brick’s other performances before? How does this one compare?

Yes. The Passage, by Justin Cronin. I think Scott is a fantastic reader. I think part of why I enjoyed listening to Mystic River was because I was already familiar with his voice and reading style.

All I can say is I really "felt" it. If the story is good, the reader should "feel" it.

I highly recommend this book to anyone who loves a good story!

It was about time I read this and it was excellent. The writing was incredible, the story gripping, and the character development was outstanding. This may have been one I should have read and not listened to because the narrator made every character sound the same. All of the characters' lowest common denominator is their grittiness, but not all of them have to talk like the are exasperated and have gravel in their throat. No matter, read it or listen to it!

Story keeps you guessing throughout. The characters are well developed and unique. The story is new and gripping. I highly recommend this book

Sucked me in from the beginning!

I was hooked! I love the twists and turns every Lehane novel has- and Scott Bricks narration was flawless! If you are looking for a thriller with non-stop action- this is it! Bravo!

Loved the plot and characters in this story. Never saw the movie but may just to see if it's different from the book. Loved it!

What would I have done?

The writer caught my interest from the very beginning. I felt I got to know the characters well enough that I could empathize. Wondered what I would do if faced with their situations.

I do agree with another reviewer that I would have liked a stronger ending. It was not exactly out of "left field" or implausible, just not that satisfying. And, yes, I did want to know how everyone fared, but I felt the use of the prologue was a bit of a cop out.

All that said, I did enjoy the book and would recommend it.