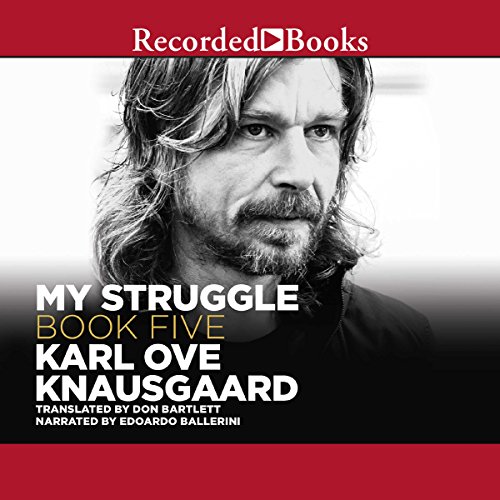 The fifth book of Knausgaard's powerful My Struggle series is written with tremendous force and sincerity.

As a 19-year-old, Karl Ove moves to Bergen and invests all of himself in his writing. But his efforts get the opposite effect - he wants it so much that he gets writer's block. At the same time, he sees his friends, one-by-one, publish their debuts. He suspects that he will never get anything published.

Book Five is also a book about strong new friendships and a shattering love affair. Then one day, Karl Ove reaches two crucial points in his life: his father dies, and shortly thereafter, he completes his first novel.

the silence of the living...

Book 5: Some Rain Must Fall

First, just a quick observation. I'm a little perplexed by the photo on the cover of the Archipelago English edition. Isn't that Robert Smithson's Spiral Jetty? Wait. I've been there. How does a giant earthwork, counterclockwise coil shooting into the Great Salt Lake fit into this novel? Beautiful, certainly, but odd.

Ok, back to the novel. Back to Knausgaard's strange, boring, brilliant, spiraling, frustrating 5th book in his 6 book übernovel. In many ways, it is fairly standard Künstlerroman. A young artist is trying to find his voice, to mark his own path, to open his eyes, open his mouth, find that literary rhythm. The amazing thing is after 5 books, I still care about Knausgaard, even after he has exposed, again and again, an often irritating and destructive side. I'm not sure if my affection is because he resembles in some ways my own brother, or because there is something warm and attractive about his strange sense of brutal honesty (as brutally honest as a fictional biography can get). I'm not sure being his brother or mother would be a job I'd volunteer for. He is fairly aware of his indulgent side, but this is one guy you might want to remove sharp items from once he starts to drink.

In the novel I was most interested in his relationship with family and his relationship with women (oh, and the scenes at the clinic are amazingly strange). I think the technique he uses to explore these relationships can be described as an inversion. What is inside of Knausgaard gets put outside. Things most rational and sane people would not expose to the world, he exposes. At the same time he chews inwardly on the outside. He brings in as almost an emotional experience the water, the weather, the cold, the ground, birds, geography. Knausgaard describes this fascination after he writes a poem:

Two leather chairs
in the wind
noise from a town
You have left.
The girl disappears
into the girl.

He follows the poem with a line that perhaps hints at some of his larger themes, "ever since I was small I had been fascinated by the relationship between the inside and the outside, when what was supposed to be inside was outside, and vice versa." Knausgaard struggles throughout most of this book to find his voice between the inside and the outside. He literally struggles with friends and family and other writers to speak. He struggles to write. He wants to write literature buy seems destined to write nonfiction. Insecurities, distractions, women, school, and his own competitiveness seem to constantly pull at his desire to be a writer. He seems trapped in the Hamlet paralysis. Caught between to be or not to be. Between the sky and the not sky.

And like a levy breaking, one day it opens up. He finds his voice. He is able to catch the fire, to hold the flame. All those clichés about writing seem to find form in the text. In this way his writing is a pharmakon (a means of producing something). In this way, writing for Knausgaard is both a cure and a poison, a blessing and a curse. Like his constant struggle with drinking too much alcohol -- which allows him to speak but also inspires him to commit horrible and often destructive acts, Knausgaard seems through-out most of the novel to be at the cliff-edge of writing. He is afraid at both his need for the drug and afraid of what will be released when he finds his voice and lets go. But, this wouldn't be a novel about the development of a writer, if he didn't, in the end, jump.

Thanks to Ballerini’s excellent narration..

... I can get through these books. I really enjoy them, but it would be an endless job without his nuanced, clear reading. For instance, the author’s brother sounds a bit like his father. Ballerini must have really thought about the psychology of the people he portrays.

He also does a fine job with the women’s dialog. Many men end up sounding fake as women, perhaps because they try too hard.

I appreciate the skill and care Ballerini puts into the narration of this difficult series by a brilliant author who is clearly a difficult man.

A good writer like Karl Ove has to know when enough is enough. This book that is related with his 20th years is bad, he drinks too much, he talks about the time working a mentally hospital, boring time of his life, relations with girlfriends that does not mean anything. Everything of this book is boring, to the point I was not able to finish.

A poetry of the mundane

Where does My Struggle, Book 5 rank among all the audiobooks you’ve listened to so far?

Great story, read the 4 books before, listening is even better! This is simply like poetry of the everyday mundane life as it is. I don't know how the author does it, but he manages to create amazing story of the familar so interesting. You appeciated your own life, with its own share of troubled relationships, difficult relatives and numerous vices more. Knausgaard had been compared to Proust, which I agree with. This is Proust for the modern age, for the middle class kid who still remember where his family came from. High and low of the narrators life, his own shameful and proud and boring moments are all here. I was sceptical at first, but James Woods review in New Yorker prompted me to read the first book and I got hooked! you would love this book if you like memoirs in general. Even ordinary life of the narrator could be quite inetersting to read, many observations on the scandinavian society and customs are a plus.

Karl Ove, the author and the main protagonist! He is forever getting into trouble and yet managing to overcome his struggle to make life as a writer, or just as a decent human being. He is so relatable!

Which character – as performed by Edoardo Ballerini – was your favorite?

Love the narrator, his voice suits the story and style of the book. Very reserved yet able to show nuances of emotions, as the narrator for the Scandinavian literature should be.

Yes, I was actually glad to suffer traffic jams on the way to and from work, which allowed for extra time. Also great to listen while running on the eliptical, you can go for more and more time just to continue listening.

I loved book five and two the most. Beautiful honest writing...
Knausgaard's writing can get mundane rarely but its brilliant pages makes the experience unique and memorable.

examination of a man, an obsessive artist

I'm addicted to the whole struggle, but put 5 on the summit. eager to read 6.