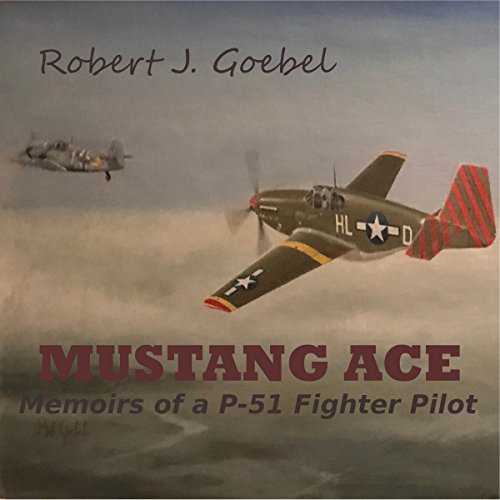 When Bob Goebel left home to join the Army Air Corps in 1942, he was 19 years old and a high school graduate. Cadet Goebel worked his way steadily through Basic, Primary, and Advanced phases of military flight training, and found in himself an aptitude for flight. After graduation from flight school, with his new wings and new commission as a 2d Lieutenant, he and his classmates were posted to a fighter squadron defending the Panama Canal. By the spring of 1944 he was on his way to Italy and the 31st Fighter Group, one of the top fighter outfits of the war. He was also headed for a new aircraft, the legendary P-51 Mustang. After 61 combat missions now Captain Goebel was officially credited with 11 victories in his Mustang. Returning home in September 1944, he was not yet 21 years old.

Goebel's memoir is a classic of combat aviation, giving the listener a true sense of what it was like to fly and fight as a World War II fighter pilot. It covers stories about the often overlooked 12th AF in Italy, and tales of flying the classic P-51D, America's ultimate piston-engined fighter.

About the Author: Following the war, Robert J. Goebel attended college on the GI Bill, earning a degree in physics from the University of Wisconsin. Returning to the air force, he served on active duty for almost 30 years, retiring as a lieutenant colonel in 1966 after working on the Gemini launch vehicle for NASA. He then worked in the aerospace industry, including on the Skylab project. The author died in February, 2012, just days short of his 88th birthday. He was preceded into the unknown, in 2006, by his wife, June.

my grandfather was a world war II veteran. I have always loved to hear the stories about the experiences. hopefully stories like this aren't lost with time

Another great autobiography of a WWII pilot

Read by the author's son, the narration was done this way to try and capture the way the author sounded. The stories are wonderful and give one a strong sense of going through flight training and combat. As experience builds up, the author becomes a better pilot and fighter, making clear the vast difference between the new and old pilots. Similar to "A Thousand Shall Fall," one of the best WWII pilot books. "The Wrong Stuff" is another excellent WWII pilot autobiography.

go for it if your on the fence excellent book. I will listen again for sure!