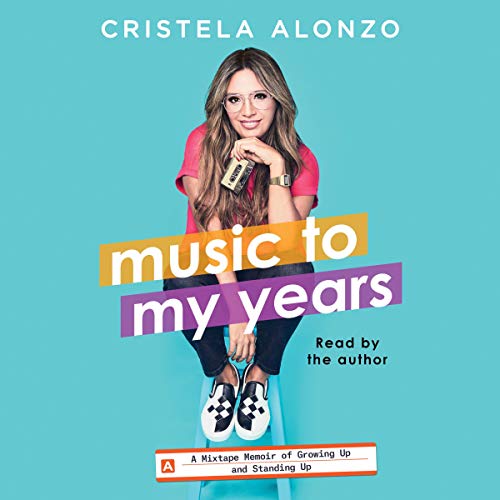 Music to My Years

In this memoir full of humor and heart, comedian, writer, and producer Cristela Alonzo shares personal stories of growing up as a first-generation Mexican American in Texas and following her dreams to pursue a career in comedy.

When Cristela Alonzo and her family lived as squatters in an abandoned diner, they only had two luxuries: a television and a radio, which became her pop cultural touchstone and a guiding light.

Cristela shares her experiences and struggles of being a first-generation American, her dreams of becoming a comedian, and how it feels to be a creator in a world that often minimizes people of color and women. Her stories range from the ridiculous - like the time she made her own tap shoes out of bottle caps or how the theme song of The Golden Girls landed her in the principal’s office - to the sobering moments, like how she turned to stand-up comedy to grieve the heartbreaking loss of her mother, and how, years later, she’s committed to giving back to the community that helped make her.

Each significant moment of the audiobook relates to a song, and the resulting playlist is deeply moving, resonant, and unforgettable. Music to My Years will make you laugh, cry, and even inspire you to make a playlist of your own.

This book spoke to so many of my own and I am sure other people’s experiences. It is amazingly performed and her willingness to share her life was a blessing

Great story funny emotional and true. we all have a personal mixtape with A and B sides

This book made me laugh. It made me cry . I loved this book !!

Loved the story and the message

A coming of age story that made me laugh and cry. I will definitely recommend to everyone and listen again.

Amazing Story, Thanks for sharing

I laughed, I cried, I couldn’t stop listening. Thank you for writing this phenomenal book. Putting your story into words can be so hard. And you are naturally a storyteller by trade, but did it so eloquently. throughout the whole book, I felt your emotions. Everyone should hear your story. It’s one of grit, perseverance, determination and integrity. Thank you, for being you.

Resignated with my soul

I felt this to the core, relatable and made me even more proud of who i am and what my family have gone through so i could be where i am.

Cristela is an amazing storyteller. Hearing her story through the lens of the songs that move her was a gift I never knew I wanted. I was captivated from the first word.

I love Cristela & I love this book❤❤❤

So beautiful her stories growing up her true raw honesty moved me so much and I'm so thankful she shared so much with us. I can relate to her even more than I thought I already did💋

This book is music to my ears as well. Excellent book. Highly recommended. Our story is not yet finish.