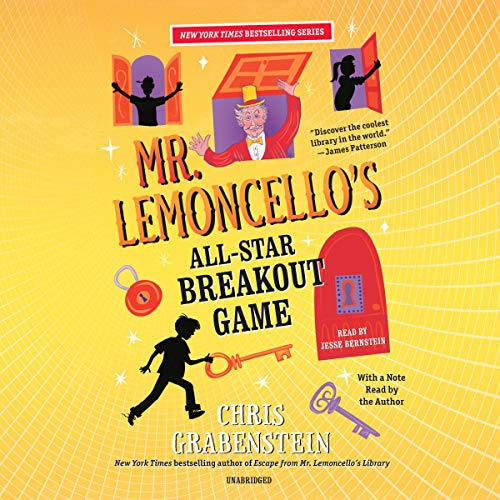 Greetings, boys and girls, gamers of all ages - are you ready to play Mr. Lemoncello's biggest, most dazzling game yet? After months of anticipation, Mr. Lemoncello is taking his games out of the library and going live across the nation on the world-famous Kidzapalooza Television Network! Everyone's invited to audition, but only a lucky few will be chosen to compete in front of millions of viewers in a brand-new, completely immersive live-action breakout game - with real kids as the playing pieces! Kyle Keeley is determined to be one of them.

Each of the winning teams must make it through five different rooms in Mr. Lemoncello's fantastic new Fictionasium by solving a puzzle to unlock each room and, in the end, break out of the library! But nothing is ever as it seems with Mr. Lemoncello, and the surprises in store just might stump even the game master himself.

Can Kyle break out of his own expectations - and win Mr. Lemoncello's ultimate game show?

This book is probably my second favorite in the Lemoncello series, after the original Escape From Mr. Lemoncello’s Library. Chris Grabenstein is such a great author! All of his books are page turners. And Jesse Bernstein is probably my favorite narrator on all of audible. His voice is so nice and he captures the book perfectly. All in all, if you are thinking about getting this book, I recommend you go for it!

I Loved this book! It was so much fun to listen too wondering what would come next.

I hope there will be another book!!!

My son (11) and i just wrapped up the All-Star Breakout game! Continually pleased with Chris’ ability to bring so many facets of life into these books!

Loved the character! Awesome to be introduced to friends new and old!

There is one main reason this gets 4/5 stars in the performance area. Both my son and I feel like there isn’t great continuity in the voices of main characters. Love Jesse as a narrator but wish voices kept their same qualities.

This story is pretty good for kids around 8-9 years old. But all ages will enjoy this book .

another great listen. I have loved every book in the series so far, and this one does not disappoint!

another great book by Chris and narration by Jesse. I really hated the movie though. Not the actors, just the production did no justice to the mastery of the books. I think they should redo it but that's just me.....

I loved this narration of the book. Jesse Bernstein is a fantastic narrator. I recommend this book to ALL kids from 3-7th grade!