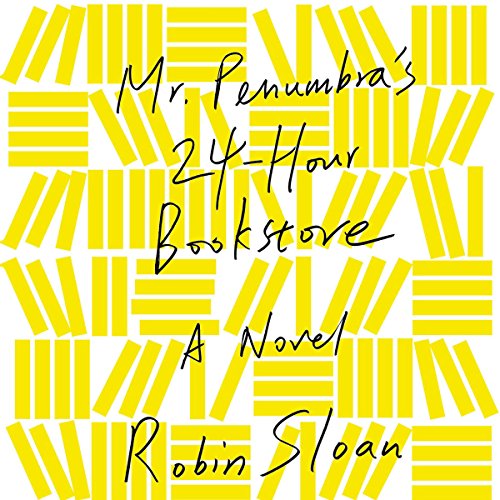 The Great Recession has shuffled Clay Jannon out of his life as a San Francisco Web-design drone - and serendipity, sheer curiosity, and the ability to climb a ladder like a monkey has landed him a new gig working the night shift at Mr. Penumbra’s 24-Hour Bookstore. But after just a few days on the job, Clay begins to realize that this store is even more curious than the name suggests. There are only a few customers, but they come in repeatedly and never seem to actually buy anything, instead “checking out” impossibly obscure volumes from strange corners of the store, all according to some elaborate, long-standing arrangement with the gnomic Mr. Penumbra. The store must be a front for something larger, Clay concludes, and soon he’s embarked on a complex analysis of the customers’ behavior and roped his friends into helping to figure out just what’s going on. But once they bring their findings to Mr. Penumbra, it turns out the secrets extend far outside the walls of the bookstore.

With irresistible brio and dazzling intelligence, Robin Sloan has crafted a literary adventure story for the 21st century, evoking both the fairy-tale charm of Haruki Murakami and the enthusiastic novel-of-ideas wizardry of Neal Stephenson or a young Umberto Eco, but with a unique and feisty sensibility that’s rare to the world of literary fiction. Mr. Penumbra’s 24-Hour Bookstore is exactly what it sounds like: an establishment you have to enter and will never want to leave, a modern-day cabinet of wonders ready to give a jolt of energy to every curious listener, no matter the time of day.

Before I read/listen to a book I read lots and lots of reviews. After I finish a book I go back and reread the reviews and think to myself, "Oh! That's what they meant!" It's so difficult to tell if you'll like a particular book when people are being so careful not to give anything away in their reviews. So now it's my turn to try to write something meaningful without giving anything away.

At first I thought the book was set sometime in the near future because of the way the author describes things. But it was just clever wording about our present situation. So, there's a guy, Clay, who is an out of work graphic designer. He's been applying for jobs, but there's not enough to go around, especially in graphic design. He's out walking one day when he comes upon a bookstore with a help wanted sign in the window. He walks in, meets the owner, Mr. Penumbra, and is hired on the spot for the overnight shift. (A 24 hour book store?!?!? What a fantastic idea!)

It seems a little odd to say, but I thought it kind of rushed too quickly into the mystery. I like to be eased into a book. On the plus side, you get sucked into the story right away. There's no looking back.

I don't agree with some of the other reviewers that said it's too techie, and a love letter to Google. I don't live in California, or work for an internet related company, but I search Google 50 times a day. This book demonstrates how dramatically our lives have changed in such a short time. Maybe this is how they felt at the turn of the last century with the rise of the automobile.

As for the end, I thought Mr. Sloan brought this book to a lovely conclusion. It's wrapped up nice a neat, like a Christmas package. No loose ends and no head scratching. This book is light, but not fluffy. It's a good book to kick back and relax with. Don't take all the negative reviews too seriously. This book is not too techie for average people. This is our life now. You'll get it.

Still Thinking about this Book!!!

I am not much of a fiction reader; I prefer nonfiction most days, but occasionally I am drawn into a good story. I was hooked almost immediately, by the narrator's artful presentation and timing...and the main character, an intelligent, yet unemployed, geeky, introvert living in San Francisco working in a mysterious 24 hour bookstore, just piqued my interest. I am not a tech person, but I learned a lot from the technical conversations and descriptions of what it is like to be a Google employee and to view solving the problems of this mystery through high tech means. It was a wonderful, thought provoking adventure, and I learned things that have been beneficial in my everyday life. It has been months since I listened to this book, and I am still thinking about it regularly. I would definitely recommend it to my friends, and l plan to listen to it again.

YA for immature As

I've read Ready Player One and I've read We are Legion (We are Bob) and it surprises me to say that those novels make Mr. Penumbra's 24-Hour Bookstore look like high literature. If you want to read a book that actually does something interesting with mysterious bookstores then read The Shadow of the Wind, The Eyre Affair, or even The City of Dreaming Books.

My mouth fell open a few times at the sheer immaturity of the author and the book's contents. Not to mention that apparently working at Google is equal to having a permanent orgasm. It got so weird that I started counting the number of times the word 'Google' was mentioned per page. Everything else is just a collection of whichever the author thinks is a hot topic right now in technology. If you have a strong desire to move into a small bare apartment in San Francisco with your laptop as your sole possession then this novel will be for you. If you're a human being, then buy anything else.

As a nerd this was a very fun read, as there are few books I've read that deal with tech issues and have decent plots. Unfortunately the characters were consistent with my two decades long experience of being the only girl in the place. The male characters were varied, eccentric, complex and evolved as the novel unfolded. The three or four females tossed in were two dimensional male figments of imagination. The two young ones were gorgeous, brilliant with no discernible character. The older female, who made a few brief appearances, was the skinny, frail squirrelly old bitty you see in children's books. Sorry for the sexist rant. Thought Robin was female when I purchased this book and had to transition into male think a chapter in.

That aside, the plot was contemporary and ingenious. Enjoyed the peek into Google employment (as I've always wanted a field trip through the place) and the amazing inventions and contrivances created to solve the mysteries. Truly entertaining right to the end. The last philosophical reflection I thought very apt at how our society has to find that delicate balance between high tech and the native artisan. Do we really want Google to replace our brain? As one who has had a passion for computers most of her life and is a Montessori teacher I struggle with that balance every day. Sloan's conclusions were very insightful. The narration by Ari Fliakos was marvelous. He could read me to sleep any night of the week.

I loved this book! And no one could be more surprised by that statement than me! I'm an over-60 female listener with absolutely no background in the underworld of imaginary dragons and such; and have only fleeting technological understandings. Nevertheless, this story caught my head and heart and I enjoyed it thoroughly. The narration is among the best I've heard -- flawless!!! It is a centuries old mystery set in such contemporary times and places that you can't help but be drawn in. Great story!!

Would you consider the audio edition of Mr. Penumbra's 24-Hour Bookstore to be better than the print version?

This is a book to be HEARD. Very much at issue in this novel is the relationship between content and method of delivery. The narrator uses his voice to great advantage, just the right nuances -- sometimes he appears to be going over the top, but then you realize that the effect is spot on.

What other book might you compare Mr. Penumbra's 24-Hour Bookstore to and why?

In an odd way, MP24HB reminds me of The Night Circus -- there is the same sense of alternate reality layered onto "real" reality. Mr Penumbr'a is shorter and less serious, the setting is very different, and the "magic" here is in the technology.

This would make a good book club selection -- a nice length, easy to follow, light-hearted, but offering some interesting discussion points. In the thousands of years of human history, print hasn't been around all that long. Is it really a tragedy that many are turning to digital and audio sources for "reading" material? Is it ultimately an either/or situation? What would you do for immortality? What's a friend? A mentor? For that matter, what is a book?

Not perfect -- the epilogue is superfluous -- but a very nice debut.

What a lovely and unexpected tale

The story was not at all what I was expecting, and it was all the better for that. I'm afraid to say anything about the story, because the expectations might ruin it for you. But, no violence, ideas offered, a great imaginative tale that kept me guessing, willingly, til the end. Wish I had a book group to discuss it with. YMMV

This book is strange. In many ways it’s very well written, in many other ways it’s incredibly mundane and oh so predictable. I think that the narrator’s clip and pacing and the way he pronounces specific words make it seem more-so that way. A lot of the dialogue is straight out of a young adult novel, yet it isn’t billed as such. I wouldn’t spend much money on it, thankfully, I didn’t. Otherwise it’s forgettable but fun

What did you love best about Mr. Penumbra's 24-Hour Bookstore?

Google employees, computer geeks (from low geek to high geek, on the geek scale), a solid story I'm glad I read but after this one, you've just got to read Peter Clines' 14. They're both good, and 14 is definitely 5 stars (just in case you only have 1 credit left). Or you could Exchange a book you just couldn't read after buying it.

Semi-edge of my seat, yeah. It's been a week or so but I really really liked this one, narrator, characters, and unique, hi-tech references (but nothing that you won't understand, yet enough to whet your appetite).

He fits his character, which is a compliment; it means the narrator didn't stand out, instead you focus on the story which is the better (by far) than concentrating on a narrator's crummy accent or whatever. No whatever's here.

If you could rename Mr. Penumbra's 24-Hour Bookstore, what would you call it?

Are you kidding? Title's are the hardest; and besides, I liked this title. It's one of the.reasons I bought the book. It fits somehow.

It's much better than reading those romance novels where women fall for these controlling men, geez. Don't women know by now that control is the opposite of love? No, the guys in this book, they're way more cool, well the main one is. Enjoy. And then read "14".

Fabulous book--original, whimsical, well written. Delightful narration.
One of my favorite books ever. I would give it a "10" if I could.