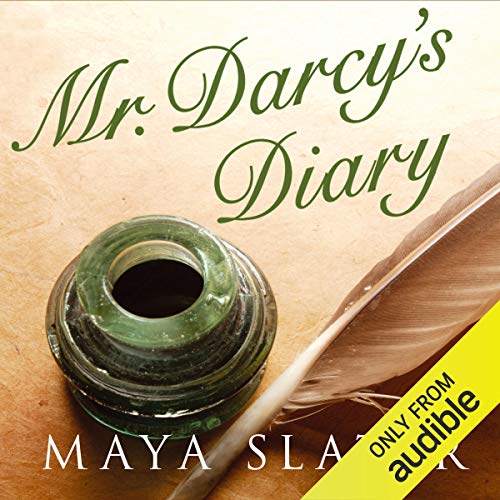 Mr. Darcy's intimate diary tells us of his entanglements with women, his dangerous friendship with Byron, his daily life in Georgian London, his mercurial mood swings calmed only by fisticuffs at Jackson's - and his vain struggles to conquer his longing for Elizabeth Bennet.

For the first time we discover what really happened between his sister and the dastardly Wickham. How did he distract his friend Bingley from pining for his beloved Jane? Why did he propose to another young woman? Only to his diary does he tell his true story. At last we see Darcy as he really is; and, beneath his polite facade, we find a sensitive, private and passionate man.

Why another P&P homage?

...because so many of us keep reading them. I doubt I would be seen in public with this book, let alone admit how much I enjoyed it, but read (or listen) to Austen spin-offs I do, and Audible is, well, anonymous and filled wih other P&P compulsives.

This Darcy tumbles with maid servants, actually supervises work at Pemberly, carouses with former Cambridge classmate Lord Byron, and can be inconvenienced by too tight britches; however, he still is not as villianous as much of the male gentry of his day. He is, of course, set back on course by "a fine pair of brown eyes." While this version of Darcy is not a monk, his antics aren't, thankfully, detailed for us. Such attempts only stain the cult of P&P, and from these I abstain in memory of Austen's brave example of NOT cashing in on fallen women as was routine in novels of her time.

As P&P re-tellings go, this is good: more detailed than the similar novel "Darcy's Story;" not as humourous (but much better narrated) than the Pamela Aidan Darcy trilogy; not as smutty as others that go on to imagine the married life of the Darcys.

Also this Darcy hints of the broader world: the Regency, PM Percival, war with France, industrialization, etc. It details a bit more of servant life. Georgina is imagined in more detail, and even Mr Hurst has some character (though not a very good one).

The narrator affects a haughty upper crust tone which might not be to everyone's ear, so listen carefully to the sample.

Face it, if you're reading this review and you've read other Darcy novels, you want to read the present one anyway. If you haven't read any of the others, this is as good as any to start. You don't need to have memorized P&P to enjoy the novel, but it helps.

I'm still waiting for a P&P re-told entirely from the servants' perspective; either that or a self-help book for compulsive P&P readers.

A waste of time

I am disappointed as this is the worst telling I have yet to read. Darcy is no gentleman, he is no better than Wickham. I cannot even finish listening to it because he is a pig. I find that there is nothing for Elizabeth to like as he looks down on her, he is taking whores to bed and the maids in the house. The book doesn't share the same details that are in Pride and Prejudice at all. His mother did not die at childbirth also he is in London alot when his character is supposed to be at Netherfield. This a poor telling of Darcy and I would not recommend this to anyone.

If you love the "purity" of the love in P&P then this is not or you. The story is interesting, but it was not at all my own vision of Mr. Darcy's "behind the scenes" involvement in the story.

That said, the narration was quite good...

Silly (but in a good, happy way)

I love a good Austen spin-off! Mr Darcy's Diary is entertaining and the narrator, David Rintoul does a really good characterisation of Mr Darcy (read: he has a bit of a dishy voice.. :P )

I found the inclusion of Lord Byron a bit of an odd addition to the story. On first reading (in book form) I was a little peeved by this, but upon later listenings of the story it really does add something wicked to the narrative (though the thought of D & B attending a Baccanal is still one that doesn't quite sit right with me).

A good bit of escapist fun! Mr Darcy's writings are certainly an interesting thing to be privy to...

I wasn't sure about buying this and while listening had conflicted emotions about Mr. Darcy as presented daily in his diary. He is a typical wealthy man of leisure of that era, who hunts, rides, boxes, shoots, and even wenches occasionally. I didn't like the weak side of him as shown by his dealings with villains such as Mr. Wickham. But I did enjoy his continual wrestling with his attraction for Elizabeth--which he berated himself with daily.

The diary follows the book perfectly and at last we get a glimpse of the lives of the other characters in P&P, which is fun.

The narrator was David Rintoul who was Mr. Darcy in an early BBC performance and had the right touch of haughtiness.

Bottom line? I'm glad that I got it and listened to it.

Not to be confused with Jane Austen, but lots of fun to listen to. David Rintoul reads it with the full haughtiness of Darcy (he was Darcy, in fact, in a 1980 version FYI!).

This is an good listen for all Pride and Prejudice fans although it is not my favorite version of the story told from Darcy's point of view. The narrator was quite good but I wasn't sure I liked the author's interpretation of the character.

This view of how Darcy lived his life before and during knowing Elizabeth. I didn't think it was boring, but it wasn't exactly exciting. However, as a huge P&P fan I enjoyed it regardless.

I neither liked the story nor enjoyed the narration. The characters and the dialogues are not as captivating as the original P&P. I have to admit that I have not yet been able to find a P&P follow-up that I liked. Therefore I do not read them anymore. But some of the reviews were so good with this one that I decided to give it a shot. But it wasn't any better.