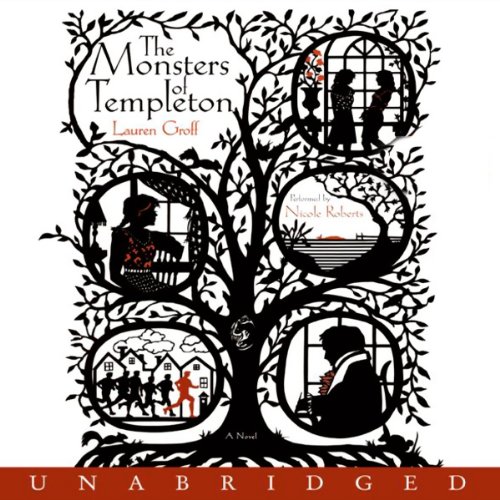 In Monsters of Templeton, Lauren Groff invents a charming yet quirky upstate New York town, Templeton, hometown to protagonist Wilhelmina Cooper. Willie shows up at her mother's doorstep defeated after an embarrassing affair with her archeology professor and soon begins the summer-long project of trying to uncover a family secret. In the process, the listener learns of the soap-opera-worthy affairs, illegitimate children, and deceptions that have taken place in this tiny town over the past 400 years.

Nicole Roberts imbues the multiple characters that take turns telling the tale with distinct personalities, making each one more fun than the last. The Running Buds, a group of middle-aged joggers who pound the Templeton pavement each morning, are breathless and stern as they update you on the town gossip. While Charlotte Temple, one of Willie's many female ancestors, has a quiet voice and perfect pronunciation, exemplifying the Quaker sensibilities of her time. Each new voice is introduced not just by name, but with Irish brogues, thick southern inflections, varying pitches, and other audible adornments.

Roberts' reading (and Groff's characters) also evolve throughout the story. Willie's mother Vi, for example, is introduced as a flip, detached, and indignant 18-year-old hippie, and grows into the present-day Vi, a born-again Christian who is wry, wise, and weary with slow-paced speech and an edgy, throaty voice. Listeners may have a hard time keeping track of the 400 years of town history and many-branches of family genealogy unraveled throughout Monsters of Templeton, but it's fairly easy to follow who's talking thanks to Roberts' deft narration. A downloadable family tree helps to somewhat clear up who fathered who, but you're best suited to give up on the details and simply get lost in the story, and Roberts' alluring voice. Erin Hobday

In the wake of a disastrous affair with her older, married archeology professor at Stanford, brilliant Wilhelmina Cooper arrives back at the doorstep of her hippie mother-turned-born-again-Christian's house in Templeton, New York - a storybook town her ancestors founded that sits on the shores of Lake Glimmerglass. Upon her arrival, a prehistoric monster surfaces in the lake, bringing a feeding frenzy to the quiet town. And Willie learns she has a mystery father her mother has kept secret for Willie's entire life.

The beautiful, broody Willie is told that the key to her biological father's identity lies somewhere in her twisted family tree. She finds more than she bargained for as a chorus of voices from the town's past, some sinister, all fascinating, rise up around her to tell their side of the story. In the end, dark secrets come to light, past and present day are blurred, and old mysteries are finally put to rest.

This is a fresh, virtuoso performance that will surely place Groff among the best young writers of today.

No, not in my review...in the information provided by Audible! I really liked this book, but in order to help myself understand the labyrinth of characters, I downloaded the "supplemental information" from the Audible website and read it over.
DON'T DO IT!! :)
The family trees give away everything, even the answer to the main mystery -- the identity of Willie's father. Luckily, I was more than halfway through the book and had strong suspicions, but I was still greatly disappointed at finding out the answer before the end of the book.
Listen, take notes, pay attention, make your own family tree, but don't read the supplemental information unless you want to ruin the surprise.
Aside from that, the book was excellent. Lauren Groff has incorporated everything into her first novel: plot twists, unusual characters (many of them), mystery, adultery, supernatural phenomenon, history, humor, and even hippies.
Yes, as noted in previous reviews, the main character (Willie Upton, not Cooper) can be a bit shallow and immature, but if all characters were perfect, why bother reading! Part of the charm of the book is watching Willie change and grow as the story progresses.
Nicole Roberts did an excellent job with the narration, adding personality to Groff's Willie, Vi, the Running Buds and the rest of the eccentric bunch in past and present Templeton.
A great repeat listen worthy of five stars.

Disregard the one poor review of this book. It is well-written and keeps you listening. All the different stories are weaved together wonderfully.

This is an intriguing story that centers around a woman who is trying to solve the puzzle about her father's identity based on sparse clues from her mother. Her search takes the her back into the family history including some scandalous events. Lots of surprises . . . I loved it.

I like occasional light reads, love a good mystery and enjoy far-fetched plots (such as monsters in lakes), so I thought I could not go wrong with this selection. Not true! I almost quit reading, yelled in frustration at the stupidity and immaturity of the main character and the inability of the author to keep her story line believable. The stories from the past were enjoyable and interesting but hard to follow in audiobook format. I did download the family tree, which did help.

In the end I could have cared less what happened to this selfish, disrespectful, immature character and felt that the reasons for the monster and for her father's hidden identity were not supported by the plot. The parts just didn't come together to make a satisfying read/listen.

What other book might you compare Monsters of Templeton to and why?

It reminded me of "100 Years of Solitude" in the way it followed one family and place over many generations, and with the matter-of-fact acceptance of supernatural occurrences.

Kept me entertained. Narration was excellent. Will look for more from both Groff and Roberts.

I enjoyed this book so much. It was quirky and fun. I loved the characters. Willie is on a quest through the past. She must find the truth about her family history. And what an inventive and fantastical story unfolds. I highly recommend this one!

i found this to be a easy, enjoyable read from the start. i was unsure what to expect given the plot shifts from past to present but it really works in each occurance. i enjoyed the narrator and thought this was a very interesting story. i would happily recommend this to others.

Having grown up not too far away from the Templeton of this novel (aka Cooperstown), I loved the setting and how Groff interweaves real history and legends with the fictions of her novel. It helps if you have read James Fenimore Cooper-or at least watched the movies-as his characters become real-life historical figures in this novel.

The monster of Glimmerglass Lake is a real legend but perhaps not nearly so monstrous as might be imagined. And there are other monsters as well-those of the human variety- but they are each complex in their own way. I agree with those who characterize this book as American magical realism.

The PDF which accompanies the book is really quite good but don't look at it until you have finished since it will give away the ending. In the meantime, don't get too caught up with the various lineages and just enjoy this quirky, sometimes mystical tale of a young woman trying to figure out who she is and what her connection is to the land that brought her forth.

loved it. what a great layered story.

an interesting twist on familiar literary territory. i loved the layers if characters and perspectives.

A beautiful story about a young woman who is going through a trying time in her life. She goes home to her small town in New England and starts to dig into her family's past. The story is told from various perspectives and includes several sublines, but it is never confusing.
It has a touch of what might be termed magical realism, which is introduced very subtly and weaves into the narrative perfectly.
The narrator's voice works well to contribute to the overall mood. I love this book.