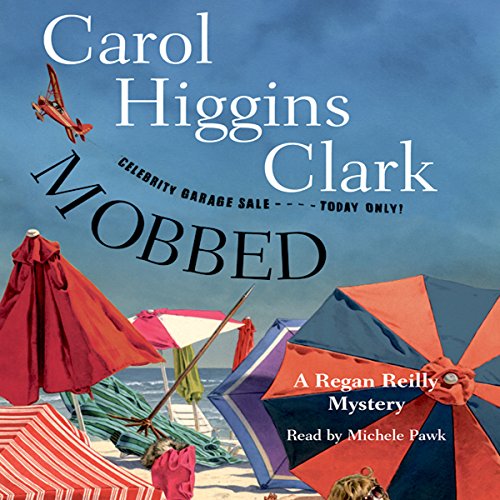 New York Times best-selling author Carol Higgins Clark is a native of New Jersey. So is her sleuth, Regan Reilly. In Mobbed, Clark sends Regan “down the shore”, where they have both vacationed since childhood. But this trip turns out to be no vacation for Regan!

PI Regan Reilly and her husband, Jack, head of the NYPD Major Case Squad, plan to spend the weekend at the Jersey shore with her parents. Regan’s mother, suspense writer Nora Regan Reilly, will be celebrating her birthday on Saturday. But Regan’s weekend gets off to an early start when she receives a phone call from her mother asking if she’d hop on a train right away.

Regan had just finished delivering bad news to a high-school classmate. Hayley Patton is a successful New York City event planner who had become suspicious that her beau, Scott, was seeing other women and hired Regan to follow him. When Hayley got the lowdown on Scott’s treachery, she vowed revenge with such vehemence that Regan is worried that Hayley might go too far.

Turns out Nora had also just spoken to an agitated high-school classmate. Karen Frawley Fulton, who lives in San Diego, called Nora after learning her mother’s plans for the day. To Karen’s shock, Edna Frawley just sold their home at the Jersey shore and is having a garage sale to end all garage sales. Everything the beautiful young actress Cleo Paradise left behind when she recently rented the house is up for grabs.

Once inside the house, Regan becomes increasingly suspicious about why Cleo left so many belongings behind when she vacated Edna’s home unexpectedly. Was she in that much of a hurry? Regan wonders. “Where did Cleo go?” is a question too many people are suddenly asking. But no one has the answer. It isn’t long before Regan finds herself searching for Cleo, whose next hours may be her last.

I believe this book would be a good listen as "background". It would a good choice for listening while traveling by car or doing household chores. I like "quirky" characters, and there were some in this book. The pace is brisk. In fact, it felt a little rushed to me.

I may purchase more books in the series, but only if I need something to listen to while I'm also doing something else.

I enjoyed listening to this book. Of all of the "Regan Riley" mysteries this was lighter than some of the other books Carol Higgins Clark has written.

What does Michele Pawk bring to the story that you wouldn’t experience if you just read the book?

Michele does a good job with the different characters.

What did you love best about Mobbed?

The story kept my attention and I wanted to listen until the end. It was hard to stop.

My favorite is always Megan Reily. She can get into so much trouble.

What does Michele Pawk bring to the story that you wouldn’t experience if you just read the book?

The emotion was wonderful. The way she can change her voice is exceptional.

The ending was very different from most. Amazing how everything can tie together and work out.