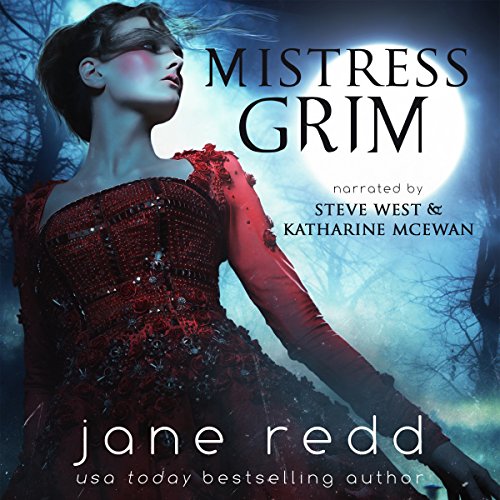 The Mistress of Death discovers that hearts never truly die. The Grim Reaper has been collecting souls of the dead for hundreds of years, but even the Master of Death has to pass on his reign. Unfortunately, his progeny is not quite ready to replace him.

Cora Grim, daughter of the Grim Reaper, is suddenly thrust into her father’s role. Leaving the Underworld on her own to bring back the dead souls, she discovers that the Master of Death neglected to tell her one thing. She can still fall in love.

Inventive story, unique perspective. loved the dual narrator to represent two characters' perspectives. Normally don't go for dark themes, but this one wasn't too heavy and I enjoyed the story.

This was the first book I have read/listened to by Jane Redd and Heather Moore. This story was unique and different from other paranormal books I have listened to. It started out slow but got into it a few chapters in.
The narrators did a great job and both were new narrators for me.
#AudiobookObsessionReviewer

This was a good take on the underworld. Good strong characters that will not disappoint. Great narration from both Steve and Katharine.
#audiobookobsessionreviewer

Hard to put down

I was really surprised how much I liked this audiobook. I've wanted to read it for a long time but I've been super busy so when it came out in audio, I snapped it up.

The writing was so well done I felt like I was there with the characters. It was also a very unique story. I found myself looking for excuses to listen.

This book popped up in my “recommendation” list several times before I decided to try it. The idea of a story about the Grim Reaper’s daughter didn’t seem my style. I’m so glad I finally gave the story a chance. The plot line quickly caught my attention and kept it through the entire book. I loved how the author kept switching between first and third person POV. The narrators were superb!

Umm hello? What's not to love?!

A story about the daughter of the Grim Reaper, is not something you come across every day. Plus it was such a fun story with twists and turns it is sure to delight! I can't wait to read more and see where the story goes next!

loved the unique, short story. the narration was great. story had a great pace and kept me interested.
#audiobookobsessionreviewer

Coming from more of sci-fi, litRPG, monsters and spaceflight I find my self blown away by how the writers paint and weaves things with beautiful words and describe it fluidly with ease.The opening chapter read by Katharine Mcewan is absolute brilliant made. I have re-listened to this a few times, had my wife and eldest son listen, we all agree that this is professionalism and really good stuff. This had me hooked in from the beginning and totally fixed to the book.

The story is from the point of view of Cora, the daughter of the Grim Reaper, king of the underworld and how her uncle want to overthrow him. The story quickly sets its course towards politics, how Cora is thrown into a role of her studies too soon, forbidden love between a prince from the mortal realm. It is pretty obvious that the author know romance when those parts in the story are described and I find my self thinking that it is really good balanced with everything else. I might, perhaps... like it.

The characters are well described and grow throughout the whole book, so no lack of development. The story has a very good beginning, a little too short of things in the middle (I think it should have been longer and dived much deeper in the lore and politics) and a satisfying ending. There are two voice actors where Stevie West portraits the male chapters and Katharine Mcewan the female, both really do it very good. Throughout the book there is an obvious change of how the descriptions and the dialouge are changing and it feels more like two styles of writing and towards the end of the story it's obvious. The lengthy and beautiful sentences become shorter and shorter, but not as something written in a hurry but more to emphase the gravity of the situations that take place. I found that part very interesting and a nice touch.

All in all, yes... this is a really good book. It is different and interesting, a little too short but well worth the read.

Wow! Those readers’ voices are amazing! I’ll search out other books they’ve narrated...

The story is a wonderful YA fantasy with a very romantic hero and heroine. Magic and immortality and love all wrapped up in an enjoyable package!

YA is my favorite genre, but this story is great for any age person who wants a clean, romantic escape from reality.