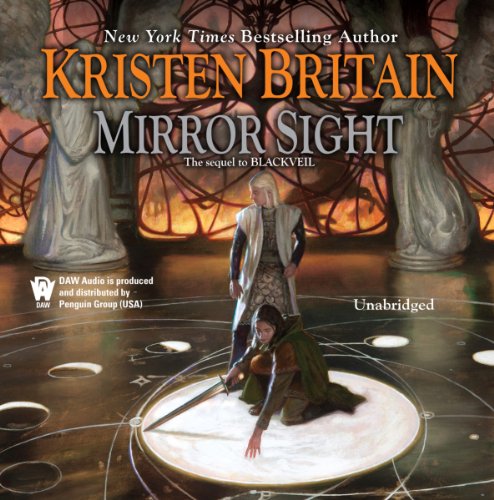 Karigan G'ladheon is a Green Rider - a seasoned member of the elite messenger corps of King Zachary of Sacoridia. King Zachary sends Karigan and a contingent of Sacoridians beyond the edges of his nation, into the mysterious Blackveil Forest, which has been tainted with dark magic by a twisted immortal spirit named Mornhavon the Black.

At the end of Blackveil, in a magical confrontation against Mornhavon, Karigan is jolted out of Blackveil Forest and wakes in darkness. She's lying on smooth, cold stone, but as she reaches out, she realizes that the stone is not just beneath her, but above and around her as well. She's landed in a sealed stone sarcophagus, some unknown tomb, and the air is becoming thin.

Is this to be her end? If she escapes, where will she find herself? Is she still in the world she remembers, or has the magical explosion transported her somewhere completely different? To find out, she must first win free of her prison - before it becomes her grave. And should she succeed, will she be walking straight into a trap created by Mornhavon himself?

Was so excited - then disappointed!

I think the story was a good story; however, only the very last part of the book actually took us back to where book four left off. I do not feel that it went very well with the other books in the series - almost like runoff series from a popular televison show. I feel that the first part of this book was 24 hours of filler with only the last 4+ hours actually relating to the story I had been waiting for. Kristen Britain is a fabulous writer - I just feel this book really didn't relate very well to the first four books. Ellen Archer is as always, a fantastic narrator!

Don't believe the negative reviews, this is a good addition to the series. It may not forward the world storyline, but is a good advancement of Karigan's personal story. Since she's the main character, that's the more important part.

Unlike other reviews, I don't plan on listing any spoilers in my review. I'll just say that this story is a bit different from previous books, with a mostly new cast of characters, a few of which i liked well enough to wish they would be in future books.
Karigan experiences a few major life milestones, and of course, suffers some significant losses. But in her usual competent style, finishes this adventure with knowledge that may help win the coming war, and may save some popular characters from fates worse than death.
I discovered this series about the time Blackveil came out. At the time i was getting burned out on fantasy, mostly because of authors like George R. R. Martin, Joe Abercrombie, and the like who's dark and bloody fiction send to have taken over the fantasy genre. I enjoy their books, but can only take so much dark fantasy. I came across the Green Rider series and became an instant fan. I listen to them on Audible, and did something I rarely do, I listened to the series a second time immediately. I hope the next book doesn't take too long to come out.

I thought the book was a great adventure. The last book left us behind the wall in Blackveil and I have to say a hard book to continue a series from. What could you write to top that adventure and keep the story moving forward.
I really didn't know where this story would take us without letting us down. Well Kristen Britain, you did it. The book took us to newer and higher places I didn't expect to go to at all. Excellent transition story and one that I couldn't but down. The questions left unanswered are a great opening to the next part of Karigan's story and leaving us wanting the next book. Is the information Karrigan brought him going to be helpful? Has our green rider changed from her experiences? Will there be a war?
Extremely well written and Ellen Archer, your performance I always applaud. Thank you and I can't wait for the next book

And this does what for the story?

(Minor spoilers)Alright let's be clear, this book was well written, the story had continuity within itself and the others in the series, but you could entirely skip this book, move on to the next and not miss anything truly important. At the end of the book, Karigan is -exactly- where she left off. She completely forgets the entirety of what happened in this book by the end. If she was able to bring back more extensive information or retain knowledge of everything she'd experienced, brought new characters into the story to stay, -something- I wouldn't feel this way. This book very much is touching on interesting ideas and pushing to keep things fresh... but it feels like there was a lot of build-up with no payoff. It was really frustrating.Ellen Archer as always is a fantastic performer, and I still love the series and will continue to listen to and relisten to it.... but I'm certain this is the odd book out of the series I'll forever skip. For die-hard fans, listen through once, but don't be surprised if you come away annoyed.

Ms. Britain does it again!

I'd been waiting in anticipation for this book and I was not disappointed. I decided to re-read/listen to the first four books and then listen to Mirror Sight vs. reading it for the first time. Ellen Archer did a great job keeping the voices consistent throughout the series and developing new ones.There's nothing like hearing Fastion and Yolanthi (sp) speak in the latter chapters. Ellen did a great job with bringing the described voices to life.

I was surprised as I started listening to what time frame she had decided to use but it makes sense given Karigan's previous time travel. I was pleasantly surprised that she was able to keep the various story lines going and intertwined.

I could see how Karigan has matured from her headstrong, naive and clumsy younger self to the considering, and (at times) more level headed young adult she is. I still found myself wanting to shake her to just do what she told but it wouldn't be Karigan if she was so obedient.

I also liked how Ms. Britain explored how some of the characters weren't simply just bad or good but had many sides to them. The writing and character development has matured and evolved right alongside Karigan :)

The ending definitely leaves enough unanswered questions for Book 6 but I'm sad to think that it will be a few years before the next book is done. It was great to see some familiar characters in unexpected places and I look forward to Karigan's next challenge. I highly recommend this book to Green Rider fans.

The middle of this book was so tedious! I found myself wanting to just give up that anything was going to actually happen! 21 hours of audio was supposed to be a pleasant surprise but I found myself just hoping to get to the "good parts"...which it finally did in the last 3 hours.

Should have been a standalone novel.

As a work on its own it was enjoyable. I love the characters and became invested in them all. However Jess this series is talk h a large turn I dont think this book fits with the overall arc. Why let Kerrigan form the attachments she does to snatch them away again. why flesh out so many characters to leave them behind? This book left me feeling like George R R Martin bet Kristen Britain that she couldn't write a steam punk romance and this was the result.

Worst in the series.

Definitely not Kristen Britain's best work. Story is very slow to get anywhere and when it finally does it ends. Main character seems all over with her emotions from previous books. One good note is that the woman doing the audio is pleasant to listen to and does a good job with the character's voices.

I have been a fan of this series for 10 years when I first took a chance on Green Rider at the book store. It was my favorite book and I still enjoy it! I read some bad reviews about Mirror Sight. To the contrary, I think this one is very well written and thought out. It took a lot of imagination to make this book. If you are a true fan of Green Rider, you will love this book as much as I did.

It would seem Kristen Britain decided she wanted to write a victorian steam-punk novel, but lacked the ambition to create new characters for it. So, she flashed her Green Rider heroine “forward in time” and wrote a book that has next to no bearing on the rest of the series.

Her female characters also continue to wallow in maudlin morality about their love lives, even though the writing claims that they are strong, independent, masters of their own destiny. I don’t know how old Britain is, but she writes about romance like a 15 year old girl.

Could have done without the whole book, and very little in the saga would be effected.

hated the story the first time I read it, loved it this time around.

You "get" the twist in the first chapter, the main character goes from full on super hero to confused but annoying damsel in distress. A lot of pining after the king (as usual) and a new love interest you know is going to die.
I will finish the series out of pure self hatred.