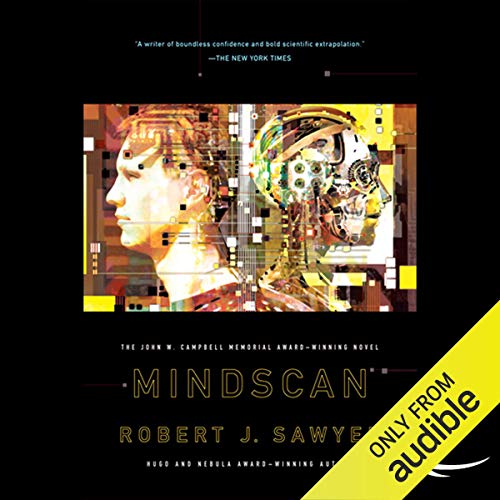 Jake Sullivan has cheated death: he's discarded his doomed biological body and copied his consciousness into an android form. The new Jake soon finds love, something that eluded him when he was encased in flesh: he falls for the android version of Karen, a woman rediscovering all the joys of life now that she too is no longer constrained by a worn-out body. Karen's son sues her, claiming that by uploading into an immortal body, she has done him out of his inheritance. Even worse, the original version of Jake, consigned to die on the far side of the moon, has taken hostages there, demanding the return of his rights of personhood. In the courtroom and on the lunar surface, the future of uploaded humanity hangs in the balance.

Mindscan is vintage Sawyer - a feast for the mind and the heart.

"Sawyer lucidly explores fascinating philosophical conundrums." (Entertainment Weekly)
"A tale involving courtroom drama, powerful human emotion and challenging SF mystery. Sawyer juggles it all with intelligence and far-reaching vision worthy of Isaac Asimov." (Starlog)
"Sawyer deftly examines what a future might be like in two neighboring countries that have become polar opposites. And he focuses on the legal and moral ramifications involved in various definitions of humanity in an intriguing and stylistically fine story. Grade: A." (Rocky Mountain News)

Loved this book. I'm a huge sci-fi geek (really Star Trek) and I heard this book referenced in a Star Trek podcast; and it did not disappoint! I suggested this book for my book club and friends who are not sci-if fans love it as well. Great job!!

That are very possible and could be executed in the future, and all well explained and thought provoking. The only downside is the over lengthy court case, I ended up skipping through some of the chapters and if my hands weren't occupied at the time, cleaning bird cages, I would have skipped even more. It became too repetitious, too detailed just tiresome which is why I gave it 4 stars.

I liked the story and the characters. I was pleasantly surprised by some turns of events, it kept me interested all the way through.

I have not yet read a Sawyer book that I haven’t absolutely LOVED, and this is a bit of a curse because my standards for his stories have therefore become impossibly high!!

This book lived up to expectations – no question! Yet again he has come up with a riveting and original plot that had me glued to every word; I just can’t get enough!

Another hands down hit.

A most intriguing and disconcerting book

If you could sum up Mindscan in three words, what would they be?

I enjoyed the back knowledge regarding the topics discussed.

Which character – as performed by Peter Ganim – was your favorite?

My favorite character had to be Karen. She was so well read and her words almost ALWAYS came easy to her. She had a certain calmness to her even when faced with a struggle.

Yes, but I made sure to break it up so that I can make it last longer.

This is a book I chose for no apparent reason and I am extremely glad I did. It is absolutely marvelous a book. If you enjoyed Robocalypse, this is even better. It get's into your head, makes you think about what you would do in this case and the book takes a detour that perhaps you may not think was coming. GREAT writing.

The premise of this book is so far fetched and yet none of it seemed fake. It was rooted deeply in some hard science. The writer is excellent as merging the science and the social in a way that was truly entertaining.

Entertaining, but not Sawyer's Best

Would you try another book from Robert J. Sawyer and/or Peter Ganim?

Robert Sawyer is a talented writer, and has a strong grasp of science. His work is definitely worth reading.

Would you recommend Mindscan to your friends? Why or why not?

I can only give this book a lukewarm recommendation. Unlike other books of his, much more of Sawyer's liberal politics creep into this one. I don't have a problem with characters having liberal or conservative politics, but when the author's politics are embedded into the overall fabric of the book, I find it a turn-off. At one point in the book, there is a courtroom trial that is laughable, with both counsels and witnesses given off-topic soliloquies that would never be allowed and seem to have no other purpose than to provide the reader with information that the author wants us to know.

In many ways this is the most Canadian of Sawyer's works:
*Toronto is the center of the universe
*The university of Toronto is Harvard
*Guns are bad, even to touch
*Queue jumping or getting better treatment because you have money is wrong
*Global warming is real and will make Canada uncomfortably hot in just 10-20 years.
*The collective is more important than the individual

Minor Spoiler:
The book misses many opportunities to be more interesting and relevant. For example, a character makes a decision based on information that he will die soon. He changes his mind when he finds out he'll live after all. Is it really reasonable that Sawyer treats him like a whiner who's being unreasonable? Also the way things end up seems messy with no clear theme, moral, message, etc. It's a bit like the work of Robin Cook where meaningless conflict is used to give a sense of drama which is rather hollow.It's almost as if Sawyer was on autopilot or lost interest in his story and finished it anyway. Perhaps he retouched some old story he had in a drawer.

To be clear the premise of the story is very interesting and the setup is quite good. It's after that, that the story disappoints. It does remain listenable and entertaining, but in a very insubstantial, fluffy sort of way.

What does Peter Ganim bring to the story that you wouldn???t experience if you just read the book?

The narrator does a great job.

Was Mindscan worth the listening time?

While worth listening, I would read other Sawyer titles first. It's not a 4-star read.

One of the better Robert sawyer books and I’ve read almost all his work. Enjoyable from start to finish. If you like sawyer then this is a must read for you

this is a great book, but it would have been better if it had more than just one person reading it

Great book as with most of sawyer's stuff

Gives you something to think about along with an interesting concept of what the future might hold. Much like his other books in this regard, well worth the listen. Narrator does a great job of portraying every character as an individual.

This was the worst of Sawyer's books I've read. Actually I loved all the other books (maybe 5 of them) that I've read or listened to. The concept is great, new and interesting but I didn't feel anything for any of the characters. The human interactive element that exists in his other books just wasn't there.