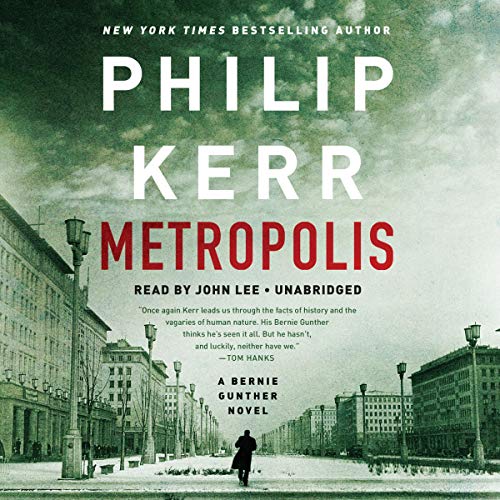 Ex-policeman Bernie Gunther thought he'd seen everything on the streets of 1930s Berlin - until he turned freelance and he is sucked further into the grisly excesses of Nazi subculture. The year is 1936 and Berlin is preparing for the Olympic Games. Some of Bernie's Jewish friends are beginning to realise that they should have left while they could, and Bernie himself has been hired by a wealthy industrialist to investigate two murders that reach high into the Nazi Party.

Ex-policeman Bernie Gunther thought he'd seen everything on the streets of 1930s Berlin - until he turned freelance and he is sucked further into the grisly excesses of Nazi subculture. The year is 1936 and Berlin is preparing for the Olympic Games. Some of Bernie's Jewish friends are beginning to realise that they should have left while they could, and Bernie himself has been hired by a wealthy industrialist to investigate two murders that reach high into the Nazi Party.

"[Metropolis is] a perfect goodbye - and first hello - to its hero...Bernie Gunther has, at last, come home." (Washington Post)

Summer, 1928. Berlin, a city where nothing is verboten.

In the night streets, political gangs wander, looking for fights. Daylight reveals a beleaguered populace barely recovering from the postwar inflation, often jobless, reeling from the reparations imposed by the victors. At central police HQ, the Murder Commission has its hands full. A killer is on the loose, and though he scatters many clues, each is a dead end. It's almost as if he is taunting the cops. Meanwhile, the press is having a field day.

This is what Bernie Gunther finds on his first day with the Murder Commisson. He's been taken on because the people at the top have noticed him - they think he has the makings of a first-rate detective. But not just yet. Right now, he has to listen and learn.

Metropolis, completed just before Philip Kerr's untimely death, is the capstone of a 14-book journey through the life of Kerr's signature character, Bernhard Genther, a sardonic and wisecracking homicide detective caught up in an increasingly Nazified Berlin police department. In many ways, it is Bernie's origin story and, as Kerr's last novel, it is also, alas, his end.

Metropolis is also a tour of a city in chaos: of its seedy sideshows and sex clubs, of the underground gangs that run its rackets, and its bewildered citizens - the lost, the homeless, the abandoned. It is Berlin as it edges toward the new world order that Hitler will soon usher in. And Bernie? He's a quick study, and he's learning a lot. Including, to his chagrin, that when push comes to shove, he isn't much better than the gangsters in doing whatever he must to get what he wants.

One of Publishers Weekly's Top 10 Mysteries & Thrillers of Spring 2019

"Gripping...Kerr does a fine job of immersing the reader in the seamy side of Weimar Germany.... Fans will be sorry to see the last of the honest, wisecracking Bernie." (Publishers Weekly)

"This book is plenty timely. But completed shortly before the author's death, it is also one of Kerr's most congenial, beautifully controlled, and entertaining works. The banter is priceless. Going against the grain - as usual - by writing an origin novel as his swan song, Kerr leaves his fans happy." (Kirkus Reviews, starred review)

A highly talented author who will be missed

This book wraps up (or, begins) the Bernie Gunther series.

I have listened to the series and have enjoyed it immensely. The noir detective style is entertaining and his colorful metaphors are often hilarious.

John Lee brings the characters to life, and breathes personality into each.

I have mixed feelings about whether I think someone should continue this series. Selfishly, I want to be able to listen to more about Bernie and his time in history, but I am skeptical as to the ability of another author to carry this series forward with the same high measure of quality that Philip Kerr brought to the page...

John Lee the narrator really does an excellent job with all of the Bernie novels. of course Mr. Kerr has written an incredible character and it has been a Wonderful ride through the Bernie Gunther series. I will miss him.

this is the end

First off, I will state that I'm sorry to see this series end as I thoroughly enjoyed the different books. You know it's the end as the author died of bladder cancer after writing this book. You can't get much more final than that.

A strange way to end a series and you wonder if the author didn't have more books planned that he didn't get to. This book should be book #1 or at least book 0.5 as it goes back to the beginning when Bernie Gunther was just becoming a homicide detective in 1928 Berlin.

But when you look at the series as a whole you aren't sure where it fits. The author wrote the first three books in the series as a trilogy from 1989-91. Then he puts Bernie Gunther down for 15 years and writes other works before coming back to Bernie in 2006 when he proceeds to write another 11 Bernie books. In all the books the author uses time slips where he goes backa nd forth between 1930s Berlin and World War II and the post World War era. Some books go back and forth in the books while sometimes he wrote a whole book going back to his Berlin and war experiences. So maybe this one set in 1928 is right where it's supposed to be.

Philip Ballantyne Kerr died in March of 2018 of bladder ca. accdg to Wikipedia. Having read all of his Bernie Gunther novels, this reader found Metropolis the most difficult to finish, both because it was the final installment and because it was depressing. Set at the end of the Weimar Republic’s era (not a praiseworthy time) it marked the beginning of Nazi Germany, a worse time, and was concerned with a heinous murderer who was both a Krippo detective and a Jewish man. Bernie flirted with the criminal underworld to solve this and another pair of murders. I say all this to point out that this story, among all the BG novels, just seemed to be emblematic in some way to it’s creator’s dying. Still, Philip Kerr delivered another amazing story that takes the reader back in time, with startling clarity, to a place one can otherwise barely imagine. RIP sir, you will be missed.

One of the best best.

I’ve read all the Bernie Gunther books and this is one of the best. I’m so sad that Philip Kerr is not with us anymore, but he is in his characters, particularly Bernie. In a way, this last novel sets the groundwork for all the chronologically Subsequent novels. I understand Bernie a little better. The character before being scuffed up by the Nazis in the war, and the American occupation.

Philip Kerr was also one of my favorite young adult authors, As well as other historical fiction. In this book, he outdid himself in terms of capturing the age, the city of Berlin with a rich tapestry of history.

We meet familiar German detective Bernie Gunther, this time in the early stages of his career. The characters are engaging, the plot convoluted. The narration is perfectly matched to the story.

I am not one who listens to "one in a series" type books, but I got hooked on Bernie Gunther's travails years ago and am glad I did. This tale, like all the others, is very entertaining. The narration, as well, is outstanding.

Once again John Lee destroys a good book with his peculiar speech affectations. I have never met or heard anyone speak as his characters do in Bernie Gunther stories. I cannot listen to this book.

Jon Snow is the greatest. Makes books so much better. He shifts seamlessly between accents and characters.

Sorry, really disappointed. The story is long-winding and rather unimportant and boring (after 2/3 of book). Murder alone is not enough for a Kerr, it also takes historical background, political development, real nazi bastards to gain its usual charm. The reader is another disappointment to me. His extremely exaggerated "singing" voice is more fit for a comical opera, I find. There is sarcasm everywhere, it seems, even where none is intended. Maybe Bernie and Brigitta sometimes simply mean what they say? Let us hope the end at least will satisfy us more.