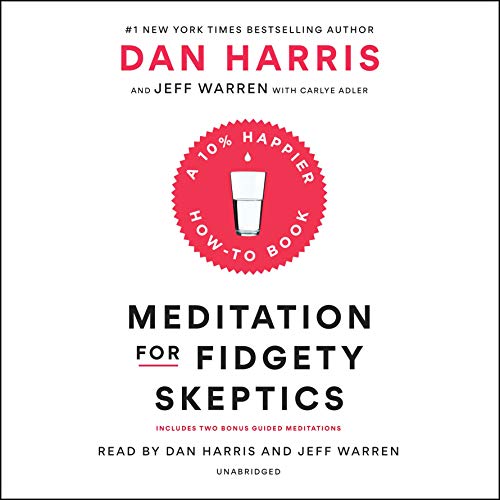 As its title so brilliantly conveys, Meditation for Fidgety Skeptics is 100 percent for you if you've considered meditation but are put off by the crystals-and-incense connotations. With laugh-out-loud humor and real-life scenarios, Harris deftly defuses woo-woo preconceptions. A spin-off of his wildly popular 10% Happier, this book is informed by his own transformation from meditation naysayer to eight-years-strong practitioner - as well as the neuroscience of how it literally rewires your brain for self-awareness, compassion, and resiliency. Harris quells concerns that meditating will make you a "lifeless blob" doormat and gives actionable, practicable ways to incorporate it in your life. You'll be on a path to enlightenment - minus the patchouli - before you can even utter "be here now." —Courtney, Audible Editor

This book will get you to meditate. Minus the pan flutes.

ABC News anchor Dan Harris used to think that meditation was for people who collect crystals, play Ultimate Frisbee, and use the word namaste without irony. After he had a panic attack on live television, he went on a strange and circuitous journey that ultimately led him to embrace a practice he'd long considered ridiculous. Harris discovered that meditation made him more focused and less yanked around by his emotions. According to his wife, it also made him significantly less annoying. He wrote about his experiences in the bracingly candid and extremely funny memoir 10% Happier, which became a number one New York Times best seller and landed Harris in the entirely unexpected position of being one of meditation's most vocal public proponents.

Here's what he's fixated on now: Science suggests that meditation can lower blood pressure, mitigate depression and anxiety, and literally rewire key parts of the brain, among numerous other benefits. And yet there are millions of people who want to meditate but aren't actually practicing. What's holding them back? In Meditation for Fidgety Skeptics, Harris and his friend Jeff Warren, a masterful teacher and "Meditation MacGyver", embark on a cross-country quest to tackle the myths, misconceptions, and self-deceptions that stop people from meditating. They rent a rock-star tour bus (whose previous occupants were Parliament Funkadelic) and travel across 18 states, talking to scores of would-be meditators - including parents, military cadets, police officers, and even a few celebrities. They create a taxonomy of the most common issues ("I suck at this", "I don't have the time", etc.) and offer up science-based life hacks to help people overcome them.

The book is filled with game-changing and deeply practical meditation instructions. You'll also get access to the 10% Happier app, where you can listen for free to guided audio versions of all the meditations in the book. Amid it all unspools the strange and hilarious story of what happens when a congenitally sarcastic, type-A journalist and a groovy Canadian mystic embark on an epic road trip into America's neurotic underbelly as well as their own.

"If you're intrigued by meditation but don't know how to begin - or you've benefited from meditation in the past but need help to get started again, Dan Harris has written the book for you. Well researched, practical, and crammed with expert advice, it's also an irreverent, hilarious page-turner." (Gretchen Rubin, author of The Happiness Project)

"The ABC News anchor, a 'defender of worrying' who once had an anxiety attack on air, offers a hilarious and stirring account of his two-steps-forward-one-step-back campaign to sort 'useless rumination' from 'constructive anguish' via mindfulness, along with invaluable suggestions for following in his footsteps." (O: The Oprah Magazine)

"If your mind has a mind of its own, this is the book for you! With humor, generosity, and devastating candor, Dan Harris makes meditation make sense. This is news we can all use." (Mark Epstein, MD, author of Advice Not Given: A Guide to Getting Over Yourself and Going to Pieces Without Falling Apart)

Overall: This book hit the bulls-eye with me. I do some kind of meditation every day., though I often wonder as in the Randy Newman song, “Maybe I’m doing it wrong.” Still, I’m mindfull of the positive difference in my life when I take the time. Dan’s 10% Happier book and app helped set the stage for what has become one of my best habits. That stage being set, this latest book is like acting class.

Performance: These guys are pros. It is excellent, as expected. It flows like a conversation.

Story: Pay attention to the title. This book is intended for fidgety skeptics, if that isn’t you, then you may not relate the the story which is essentially that of Dan Harris’s epistemic exploration of mindfulness meditataion as it relates to himself. The good news for me is, it checks most of my boxes, too. If the title fits you, then dive in, and don’t forget to check out the app.

Great book. I have been wanting to get into meditation for a while now. This book really explains science and practice for a beginner.

Only gripe I had was there are meditations scattered throughout the book. I would love if these were accessible easier/book marked. Many times I was driving or something, so couldn't take part in meditation, then had to go back and try to find it.

If you read 10% Happier, don't bother

I really enjoyed 10% happier and was hoping for a bit more in this one, but it doesn't really deliver. Especially for someone with a well established meditation practice. But, if you're trying to get one started you may like this book.

Anyone can meditate after this book

I haven't even finished the book and I have already forwarded it to 2 people. I just can't say enough about how well this book was done. I have been practicing TM for 6 months. I love my TM teacher but felt like I wasn't fully understanding the process in general or what other peoples experiences are. I liked how Jeff has a way to troubleshoot any issue you have with your practice. I also like the way that Jeff & Dan have addressed all of the facets of meditation, the excuses for not being able to do it, the concerns about not being able to quiet your mind, etc. is so well done. I also enjoyed how they spoke about thoughts, how common it is to constantly be thinking, even during meditation as this I think the "can't quiet my mind" excuse is the most common. Even after 6 months, I still spend probably 75% of my meditation thinking about other things. But I still have seen so many benefits from the practice including clearer thinking, more creative thinking, less anxiety, a calmer demeanor. For me, meditation has made me 50% happier!

I personally think that EVERYONE should meditate. So many people automatically dismiss it without even trying it. This is the book to convince you to at least give it a try. There is no way you don't have at least 10 minutes (and Jeff will only ask you to find 1 minute) to meditate every day. You might actually be surprised by how easy it is to meditate and how much you benefit in ways that you couldn't even imagine. You don't know how much better your life can be until you give it a try. It is worth the effort (and isn't much effort).

great book for learning this skill

lots of practical tips and training. Dan offers insight how to along with lots of encouragement.

This was surprisingly great.

I've practiced zen mediation for several years, meditating off and on fairly regularly. It wasn't until I randomly encountered the story of Dan Harris on some Saturday commercial, that my interest was piqued. I downloaded the audible book and found that this Americanizes so much of the Eastern philosophies that can be so rigid, dogmatic, and intimidating to us Westerners. Mindfulness is not Zen, but the core practices are very similar and the way this is presented is great.

I've been after my wife for years to mediate with me. She listened to a few chapters of this book with me as we drove on a small road trip to visit my parents. Listening to Dan explain the hows and whys in a simple to the point style clicked with her. She started with a guided meditation by Jeff, and now goes to a meditation center on her lunch break at work. She is on the path and its awesome. Thanks Dan, Jeff, and Carlye. Good stuff.

So happy for this book, best listened to because of the great meditations and the authors great sense of humor.
I really enjoyed the easy and laid back attitude. Some of my concerns about my practice has gone up in smoke. This one is for everybody interested in meditation.
Thanks to all involved
Big love
H

I always wanted to lean to meditate and don't think I would ever have, if not for this book. The ingenious title got me to give it a try and boy was it worth it. Took me a while to finish it but I've been to busy meditating!! Narration was spot on, great presentation of the practice, even laughed a couple times! My wife is so suprised that a scattered brain like myself is able to do it. Highly recommend!

The narration quality is excellent. I was hoping for more focus on the "how" vs the "why" of the author's approach to meditation.
Harris is an obvious talent, funny and sardonic.

It's a shame there was so much bad language in this book , and uncalled for , no reason other then just to use the F word, I'm sure this will limit listeners. If I wanted my child to learn about meditation , it wouldll not be from this book . 👎