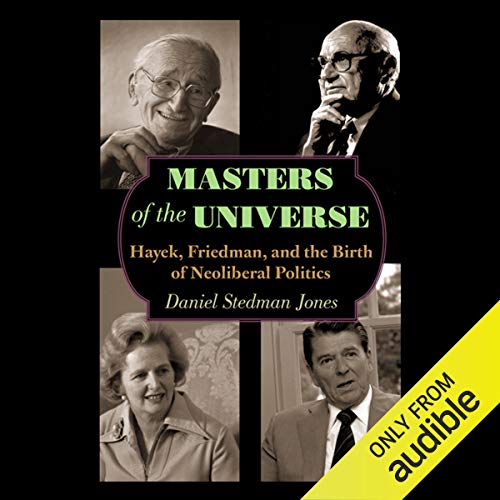 Masters of the Universe

Masters of the Universe

How did American and British policymakers become so enamored with free markets, deregulation, and limited government? This book - the first comprehensive transatlantic history of the rise of neoliberal politics - presents a surprising answer. Based on archival research and interviews with leading participants in the movement, Masters of the Universe traces the ascendancy of neoliberalism from the academy of interwar Europe to supremacy under Reagan and Thatcher and in the decades since. Daniel Stedman Jones argues that there was nothing inevitable about the victory of free-market politics. Far from being the story of the simple triumph of right-wing ideas, the neoliberal breakthrough was contingent on the economic crises of the 1970s and the acceptance of the need for new policies by the political left.

Masters of the Universe describes neoliberalism's road to power, beginning in interwar Europe but shifting its center of gravity after 1945 to the United States, especially to Chicago and Virginia, where it acquired a simple clarity that was developed into an uncompromising political message. Neoliberalism was communicated through a transatlantic network of think tanks, businessmen, politicians, and journalists that was held together by Friedrich Hayek and Milton Friedman. After the collapse of Bretton Woods in 1971, and the "stagflation" that followed, their ideas finally began to take hold as Keynesianism appeared to self-destruct. Later, after the elections of Reagan and Thatcher, a guileless faith in free markets came to dominate politics.

Fascinating, important, and timely, this is a book for anyone who wants to understand the history behind the Anglo-American love affair with the free market, as well as the origins of the current economic crisis.

An excellent summary of the development of neo-liberal thoughts and practices. Friedrich Hayek formulated the free market theories of political thought. Milton Friedman translated those thoughts into policies that formed the basis of Ronald Reagan's and Margaret Thatcher's ideas whose effects can still be felt today.

If any listener feels bogged down by some of the housing policy sections, skip to the last chapter for a riveting and incisive conclusion. Though boring in those sections, slog through them and you will be rewarded.

If you are into economics, history, and politics - this is a must read/listen.

This is an incredibly detailed outline of the history of neoliberalism. A previous review mentioned that it is biased and I disagree. I would argue that A Brief History of Neoliberalism by David Harvey is much more biased as he is a self proclaimed Marxist. Daniel Stedman Jones does a better job of being more objective in his writing style regardless of his personal beliefs. His biases really only appear in the conclusion but they are based on all the evidence presented prior.
Great read/listen. Jam packed with valuable info.

What disappointed you about Masters of the Universe?

Daniel Stedman Jones does a decent job in diving deeply into the history and ideas. The problem is that time after time after time his bias, he is part of Demos, shines far too brightly. Too often it results in questionable characterizations of historical events. If you're looking for a different viewpoint on Hayek, Friedman and others you will find it here. The problem is the accuracy of its conclusions are questionable.