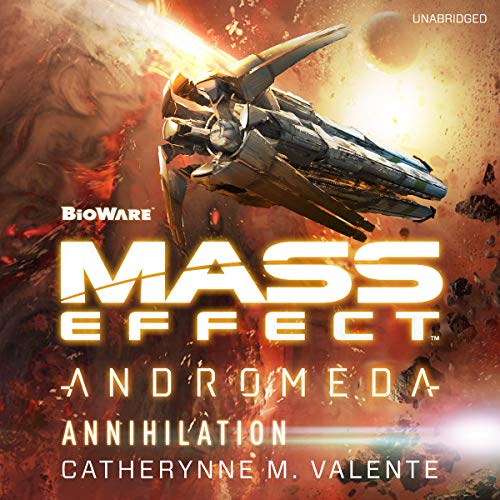 They slept for hundreds of years, dreaming of a new home in the Andromeda galaxy. When finally they awake, their dreams of peace are shattered. These colonists - turian, salarian, asari, human, and more - face an uncharted galaxy and threats beyond understanding.

They slept for hundreds of years, dreaming of a new home in the Andromeda galaxy. When finally they awake, their dreams of peace are shattered. These colonists - turian, salarian, asari, human, and more - face an uncharted galaxy and threats beyond understanding.

With a new game, Mass Effect Andromeda, set for release in 2017, the launch of a new series of Mass Effect novels is timely. The new game will take the story in a dramatic new direction and is set in a new region of space, with a new and deadly enemy.

Titan is publishing four unmissable Mass Effect novels. The novels will act as prequel and sequels to the events in the games and will become part of the overarching Mass Effect saga. These new stories, developed in close collaboration with the Bioware game team, weave directly into the action of the new game - and will reveal events kept secret over the course of game play - and will add to the canonical Mass Effect saga.

I liked everything but the ending

As a fan of the quarians, I was looking forward to this. Sadly, while I was enjoying the story, the characters and loved the writing, the ending left a sour taste in my mouth. I won't spoil, but I felt crushed by it. I wish I could've loved, I can only say I enjoyed now. I'm sure others will too. I recommend it to Mass Effect fans all the same.

this book is an actual masterpiece.

I was hesitant because I've always been kind of wary of video game novelisations, but I love Mass effect and I love Catherynne Valente, so I went for it and I have no regrets. my face is covered in tears and my heart is full.

This is the Andromeda we needed.

Forget the video game this novel was based off of and just get this book! If you love the Mass Effect series do -not- pass up this experience. The author is clearly in love with the Mass Effect universe and her knowledge of it shows. The narrator does an exemplary job from start to finish and the audio is edited with professionalism. Mass Effect fan approved.

Story: A locked-room horror mystery with a heavy dose of culture clash. If you're into the world building of Mass Effect, you'll have a lot to like as the lesser-focused species get their time on stage. The ending unsettled me, but it seems like it's supposed to. Not at all a light read, but turned my rides to work into no time at all. Narration: I very much enjoyed Tom Taylorson as bro Ryder, and he knocked it out of the park here as an entire crew of varied voices talking to each other. There are a lot of sections of characters almost monologing, but he made it very easy to get drawn into those character moments. He hits the heavy spots with gravity without making them overwrought, and gives a nice wryness to the rare moments of levity.

I only wish we could have played it.

I don't know if the story reader is a mass effect fan, but he really made the story come to life.

The overall story was pretty great, the performance was amazing! The speaker actually acted out the dialects and accents of the various races, even as far as Darth Vader breathing as the volas. Unfortunately, the ending is kind of deus ex, where the solution was kind of just happened upon, but that was surrounded by a great mystery and character building.

Most valuable tie-in and a must read for the fans

First of I've got to say that, though I liked Fryda Wolff as my pathfinder more than Tom Taylorson, he gave an astonishing performance here. And thankfully the plot itself spared me the painfully obvious twists and gave surprisingly good ones. Thanks to the author. Definitely adding this book to my collection in physical form. It gave me a shimmer of hope that Bioware can produce a great story once again. I'll see you in Andromeda.

Enjoyable story for ME:A fans, but nothing super special.

<in my best Elcor> With indifference: I liked it, but I didn’t love it. It was interesting, and toward the end it touched on a lot of great topics which I wish would have been explored further. With disappointment: Since I expect this to be the final Mass Effect Andromeda novel, I don’t expect any sort of follow-up to these, which given this particular title, is par for the course. <end Elcor> The story was good, but I’m not sure how it jives with that last scene from Mass Effect Andromeda. I would write that it was good to have a story with few humans, but they were ALL very human: Elcors and Quarians who love Shakespeare; Batarians who are basically just nasty humans; Quarians with (literal) jugulars... anyway. The characters were a little too human, and too many human elements creeped in, making it feel less alien, even by Mass Effect standards. Some interesting topics were broached, like the political/power structures in the new galaxy, but none of them were delved into. It was a golden opportunity that was pushed aside in lieu of a somewhat traditional whodunit. On the bright side, there were giant, floating jellyfish, so there’s that. This is good (but not great) for anyone who loves Mass Effect, enjoyed Andromeda, and wants to see what happened to the Quarian (and Elcor, Hanar, Volus, Drell, etc) arc. I listened to it fairly quickly, so clearly I enjoyed it.

The worst of the new Mass Effect books

Never actually made it to the end, my wife and I tried to listen to it on a trip across state and a little over half way we both decided that any pod cast on my phone would be more fun. Slow plot and largely unlikable characters make it more of a chore than an adventure.

This is the best mass effect book I’ve listen to. The inter-alien dialogue is very humorous and I quite enjoyed it… I hope another Mass effect audiobook by this author comes out soon