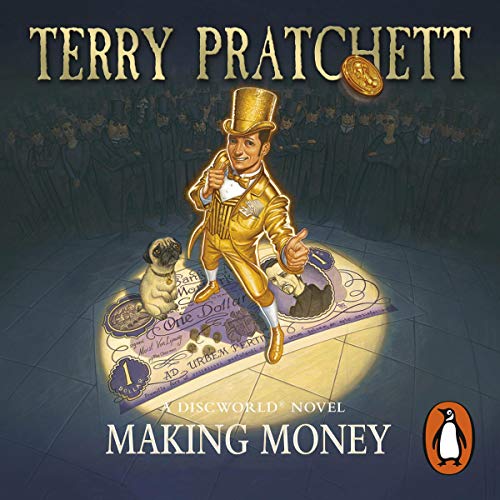 It's an offer you can't refuse. Who would not wish to be the man in charge of Ankh-Morpork's Royal Mint and the bank next door? It's a job for life. But, as former con-man Moist von Lipwig is learning, the life is not necessarily for long.

The Chief Cashier is almost certainly a vampire. There's something nameless in the cellar (and the cellar itself is pretty nameless) and it turns out that the Royal Mintruns at a loss. A 300-year-old wizard is after his girlfriend and he's about to be exposed as a fraud, but the Assassins Guild might get to him first. In fact, lots of people want him dead.

Oh...and every day he has to take the Chairman for walkies. Everywhere he looks, he's making enemies. What he should be doing is...Making Money!

Particularly suited for listeneing to

What made the experience of listening to Making Money the most enjoyable?

What was one of the most memorable moments of Making Money?

What does Stephen Briggs bring to the story that you wouldn’t experience if you just read the book?

It would not make a suitable film

This is one of Pratchett's books that suit audio. Not all of them do

Moist Von Lupwig is back! This time Patrician Havelock Vetenari has different plans for him. The city bank needs reform, and Von Lupwig is the man for the job. Unfortunately he refuses the immediate riches and a dog becomes the chairperson of the Royal Bank! But there is a catch that ensures that Von Lupwig cannot escape his newest adventure.

New characters introduced are a special kind of gollum and prof. Hicks of the Department of Postmorten studies...

This is the second novel featuring con artist Moist von Lipwig, following where "Going postal" left. As usuall with the sharp humor of Prachett, you will not be dissapointed or bored though this book, it contains a female golem called Gladis, a randy ghost and a dog, chairman of a big bank, with an unusual toy. This is the first audio I head from Prachett's work, and I find the characterization and reading quite good. Please get it.

What made the experience of listening to Making Money the most enjoyable?

Stephen Briggs does a wonderful job bringing Terry Pratchett's discworld alive. One of the best audiobooks I've heard in a while.

If you could sum up Making Money in three words, what would they be?

Old languages, Con artist and a touch of magic.

What does Stephen Briggs bring to the story that you wouldn’t experience if you just read the book?

Stephen Briggs is far from my favorit story teller, but he is one of the better story tellers. I happend to like Nigel Planer better. But he has the time to read my favorite books whiled I work and do my duties at home.

I might say the last part where ouer willen wakes up in a ward for ppl that think they are Vetenary and he is as happy as he could ever be.

This dook is a brilliant follow up on Going Postal, Libvig is not my favorite character ore anything. But The Dick Worlds series is an absolute blast.

not quite as good, but still amusing