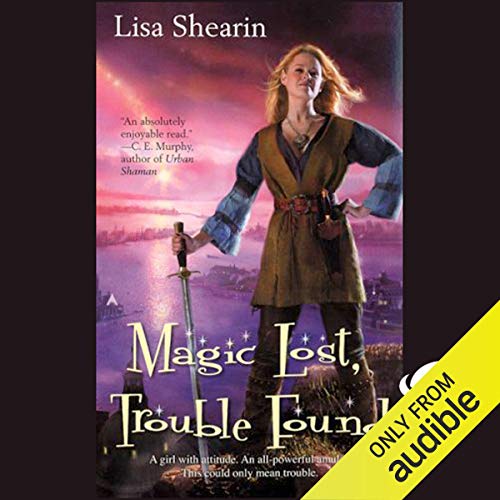 Raine is a sorceress of moderate powers, from an extended family of smugglers and thieves. With a mix of street smarts and magic spells, she can usually take care of herself. But when her friend Quentin, a no-quite-reformed thief, steals and amulet from the home of a powerful necromancer, Raine finds herself wrapped up in more trouble than she cares for. She likes attention as much as the next girl, but having an army of militant goblins hunting her down is not her idea of a good time. The amulet they're after holds limitless power, derived from an ancient, soul-stealing stone. And when Raine takes possession of the item, it takes possession of her.

Now her moderate powers are increasing beyond anything she could imagine - but is the resumé enchancement worth her soul?

"Lisa Shearin has the potential to become the Janet Evanovich of fantasy. She writes with a fun, unpretentious style, and she has mastered writing with humor.” ( SFF World)
“Edgy and fascinating….This tough and feisty woman kicks butt.” ( Romantic Times)

This is the latest series I'm listening to. As a first book, it was a pretty good start and the series keeps getting better as it evolves. I just bought book 5 and plan to get the rest. The only odd thing I had to deal with was trying to imagine tall sexy goblins. I've always thought of them as squat ugly things; but I just picture Legalos with fangs.

Where does Magic Lost, Trouble Found rank among all the audiobooks you’ve listened to so far?

A fun and exciting series with a very human heroine. No dark, depressing segments.

The Story/plot was pretty good, however the narration wasn't. I had to rewind several times as the monotonous tone of the reader had me drifting. The lack of inflection, and rise and fall of voice had me falling asleep several times. Get someone else to read this series as I believe it is a decent one. In my opinion buy the book.

My type of book, with the heroine who may be in over her head, will never walk away from doing what is right, even if she expects to die doing it. Her family may be the most notorious pirates around the seas, but she loves them anyway. While searching (which is her talent) and trying to keep her pirate cousin out of trouble she is attached to the most evil magical power. After fighting off those who wish to misuse this stone, and discovering her father used to be the protector of the stone is now vanquished inside the talisman she must go on to find a way to disconnect the stone from her before it eats her soul as well. Loved by both the most black magician around and the strongest white magician around, although neither will admit it, she must continue stumbling her way while trying to remain alive.

There is a rhythm and a beat to a well written, first person, story. Lisa Shearin feels it, Raine Benars has it. Unfortunately for the listener, Eileen Stevens has neither; at least not in this first installment of the series.

This is a happening story. It's fun, fast, believable, and full of magical mayhem of the highest caliber. Raine Benars, elf, is a street kid at heart. She has high standards, but they may not always reflect those of her society. She finds things for a living. Some of the things she finds may or may not be considered legally lost...

In this story she starts out with the best of intentions and, through a series of events which are completely beyond her control, ends up the center of attention in a wild magical quest which drags her through the lowest of the low to the highest levels her society can offer - and she manages to fit in perfectly at every turn. If you are ready for fun, this is the perfect series for it.

Couldn't finish the book due to unsuited narration

What would have made Magic Lost, Trouble Found better?

This audiobook would have been better with a different narrator. I hope Audible commissions a different recording in the future.

I had such a hard time staying interested in the story because of the monotonous unsuitable narration.

I never read the book in print but heard I would probably like it. As it was, I got about 3/4 of the way through the audiobook before abandoning it because the narration is so unsuited.

Totally the wrong person to narrate this book!

There is a flow to a story. This woman does not have any decent grasp on this concept.
The voice is fine. The rythme and flow are terrible. She chops it up in ways that really don't work. And if she messed up the flow of thought and action any more than she does, I would be pushed over the edge into screaming and pulling out my hair out of frustration. I have read these books in print. This recording is terrible. The fragmentation makes the story being read confusing. This is not a confusing text. The flow of the writing is quite natural and engaging, until this woman reads it. Avoid books read by Eileen Stevens.

Too slow, lead heroine too whiny

What disappointed you about Magic Lost, Trouble Found?

I was very disappointed in this as I had high hopes based on other reviews but I just couldn't get into the story. I found Raine Benares to be an uninspiring lead; she was mediocre in her life and her magic skills but all of a sudden when trouble comes she turns into some super-fighting, tactically aware wonder. I am sorry, but the increase in magic skills is explained but not anything else. You don't go from only ever using your fighting skills in practice and threats (while not explicitly stated, given her lack-luster level of magic skills and humdrum life, it was apparent she isn't fighting bad guys every day) to being able to fight skills warriors to the death without nary a scratch.

I guess what I really couldn't stand most of all was how whiny Raine sounded. It might have been all inner dialogue (but boy was there a lot of that) but it got on my nerves around 3 chapters in. Listening to the audio version rather than reading this was the only way I got through the entire book - if I had to be the one turning the pages the book would have disappeared very quickly.

For what should have been a fast-paced, action filled story (the entire book takes place over the course of less than a week) it just seemed to drag on. I blame that on too much of 'what Raine is thinking right now' rather than focus on 'what is actually going on with the action'.

Would you ever listen to anything by Lisa Shearin again?

I note some of the previous comments about the narrator and while I didn't find her compelling, she was no worse than what my own voice sounds like in my head when I am reading a story so it was acceptable to me.

Excited about this series

Slow to start, but enjoyed the characters development. Narrator did a great job of putting voice to different characters.