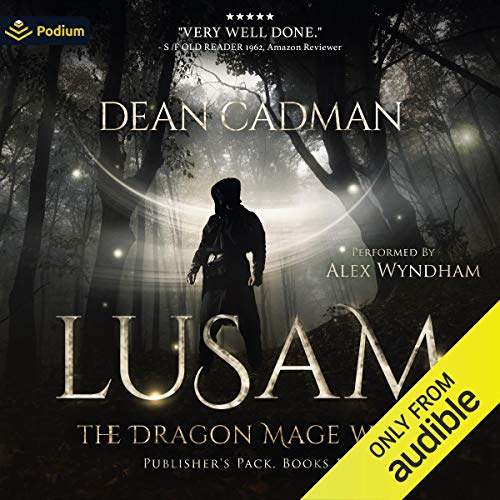 Lusam grew up in the relative safety of the Elveen mountains with his grandmother. She taught him the basics of magic and discovered, quite by accident, that he possessed a unique skill never seen before: the ability to hide his magical aura from the mage-sight of others.

Dark secrets surround Lusam's origins, and the dark agents of the Empire will stop at nothing to kill Lusam. But before Lusam can be taught all he needed to know about his past, his grandmother unexpectedly dies of a fever, and Lusam finds himself homeless on the unforgiving streets of Helveel. Unbeknown to Lusam, the only thing keeping him alive is a promise he made to his grandmother to always hide his aura, no matter what. Lusam meets and befriends a young thief fleeing her old city of Stelgad before making a magical discovery that will change both their lives forever, and possibly the fate of the entire world.

I found the story underwhelming, the main character is a Gary Stu. The relationships are shallow due to an altogether too fast paced story.
Compared with what I am accustomed to, I felt the performer lacked range.
Both elements combined, although not bad, makes this audiobook mediocre.

Thank God it was 2 books!

So I made this purchase knowing it was 2 books, and thank the good lord it came as 2 because I wouldn't have continued on to book 2 with just book 1 to go off of. This is the worst kind of Power comes easy story. Everything about this book (And even the series) comes easy to our main character. Who is a well developed, good kid whom you want to root for the entire series (Although that may be more towards how Cadman gets you to hate the villains, but it's still something), but he struggles with nothing. He's born a powerful mage. He met his soul mate in the form of the first person he talks to in years on the streets. He gets a dream job for a street kid that gives him shelter and food for both him and the girl. At the job, he just happens to find a magical book that grants him even more power just by reading it. The girl just happens to be the best knife thrower in the world. He gets a guardian protector that turns into more of a best friend/father figure. He meets a goddess, that next to nobody has ever seen, but that he sees often and saves his life a few time.

Then, once you get passed all this, you have to deal with the journey. In most stories, you deal with the intro, the Training, the journey, the love and the conflict. However, the Intro is very quick, the training and love are instantaneous, and the conflict is barely mention able. So all we are left with is the Journey. They are always moving from one situation to another. Always something to do but we have to share the entire trip because there is nothing else to discuss as everything else is set. It just becomes very frustrating and dull to listen too.

I be honest, I actually compared this to the &amp;quot;Mageborn&amp;quot;series by Michael G. Manning in the way that I grew bored with everything and eventually disliked the series by the end while not really being able to tell you why I disliked the series. Lusam actually does have everything. I just wish there was some true dialogue and a true battle that the MC's could loose. You never truly get that sense that they're in. They're either running too far a head, or he's just too powerful for them to be at risk.

Has Lusam turned you off from other books in this genre?

No, but I will not be continuing with this series

Would you listen to another book narrated by Alex Wyndham?

If it was a very well written book I could handle listening to Alex, but there are so many out there that are better

What character would you cut from Lusam?

This is an ok book if you just want a story that you can get to the end of. There is no depth to the story and very little character building in my opinion.

Sadly this is a pretty mediocre book...

What would have made Lusam better?

Much less exposition, greater character depth, less predictable story arcs. Having the main character simply handed all of his powers was also an incredibly trite and frankly silly plot device that really stretched credulity. As others have noted, this is not two books - it's two sections of a book - which I find to be very dishonest advertising. I also found use of words like "force field" to be very off putting, those are not things a medieval culture has ANY conception of, and it could have been handled more creatively and originally in the world. Honestly the whole book suffers from a lack of creativity, polish, and general effort. It isn't awful... it's just very not great. The main villain is also very unbelievable, which is something I always hate.

Has Lusam turned you off from other books in this genre?

The "surgery" was fairly interesting.

The narrator did a good job - each character has a distinct voice, and the emotions of the characters come across. If you are VERY forgiving about cliches and inconsistencies, it's not a terrible book - I've certainly read worse, but I won't be picking up any sequels.

Needs work, but has potential

Narration is perfect, demonstrating a commitment to excellence. Storytelling is imaginative and vivid, but some plot holes exist. Writing quality is weak. I did read books 3-4 after listening to this 2-volume audiobook, because the books are free with kindle unlimited. There are expected to be six books in the series.

Told in 3rd person through various viewpoints. Set in a fictional world of kings, castles, mages, dragons, and gods engaged in sibling rivalry. Main characters include a 15-year-old homeless boy, a street girl, a warrior paladin, an evil warlord emperor, etc. The main characters form a fellowship, central to the series.

The hero Lusam develops his powers too fast, too easily. Find an ancient book. Absorb its magical gifts. Lather, rinse, repeat. The romance occurs too easily. The kissing and blushing (and implied sex) gets old. As for the marriage proposal, I was almost shocked at the author’s bad timing, given the circumstances.

On the upside, the warrior paladin (Renn) is totally credible.

The story is engrossing at times. However, the writing quality is just mediocre. A bit too much exposition. Misplaced commas and anachronistic language. Renn seems to only know one way to address people: “old friend” crops up several times in short conversations.

The author repeatedly has the comrades roaring with laughter at things that are barely worth a smirk. Laughing until they cry. Nothing wrong with a simple smile. A smirk. A chuckle. Whatever.

Lusam strangely laughs at painful or discomforting accidents, like getting dunked, or getting dragged through the mud by a galloping horse. Saying that characters laugh does not comedy make.

But the big problem is the Empire’s goal, to open a rift to the Netherworld. Are all these mages suicidal idiots?

Warning is in order

This book is simple. The language and style are about a 4th grade level, as is the plot. I don't think i have rolled my eyes as many times in the last year as i did in the course of this book. The plot twists and progression are astonishingly unbelievable. Direct intervention by gods, more than once, are the kind of plot device used regularly. The author takes an omnipotent view and jumps in and out of every character with abandon, leaving nothing for the reader to ponder except why the author would take such liberties.

Flat characters, dubious interactions between them, unbelievable magic systems that the main character cheats to obtain anyways, and irresponsible and inconsistent writing.

On the positive, the narrator was enjoyable, and it gave me the idea that if this writer can succeed, then why not me? I'll be writing my own book series as well!

Good narration, but very childish, simple and cliche writing, maybe that's the target audience and not me.

I really enjoyed listening these books. I can't wait until books three and four are available on audible as well.

I like the story line and character build in this story. Narration is also good. I would recommend this to others. Looking forward to book 3.

This audibook was... Unfortunate.

Firstly, the story. While I can usually allow a few 'hero gets exactly what he needs to succeed by miraculous happenstance' situations, this book was riddled with them to the point that it became just unbelievable. (spoilers)
Hero needs to not be 'seen' through mage sight? Well he just happens to be the only mage in the universe to be able to control the appearance of his aura.
Hero needs a place to sleep and get food? Well he just happens to be the only starving child in a city full of them to snag the vent behind the bakery.
Hero needs a new place to stay? He just happens to wander into the beggar area just minutes before a man looking to hire a kid that can read for a job, and Lusam just happens to be the only kid in town that can read.
Hero needs new magic? There just happens to be a secret catacomb under the place where he has a short job that has a fancy book that happens to give him every magic knowledge he will need for the rest of the book...
You get my point. And that's only the first few chapters, this pattern never ends.
I gave the story 3 stars, despite this, because I like the world the author created, and used in a different capacity, I could see it thrive.

Secondly, and arguably more detrimental than the story itself, was this book's performer. Take a sentence, any sentence, and say it like it's a revealing pronouncement of some long-awaited fact. Now, use that same intonation for every sentence, repeatedly, for 12 hours. It gets really grating really fast. After hour 2 of this, I discovered that if I hook this book up to my car's Bluetooth, turn the radio volume down so that I can barely hear the words, and drive down the highway, then I can drown out the intonation enough to get the story without wanting to rip my ears off. Sure, I may be being dramatic about it, but it really makes you that crazy listening to the same tonality for so long.