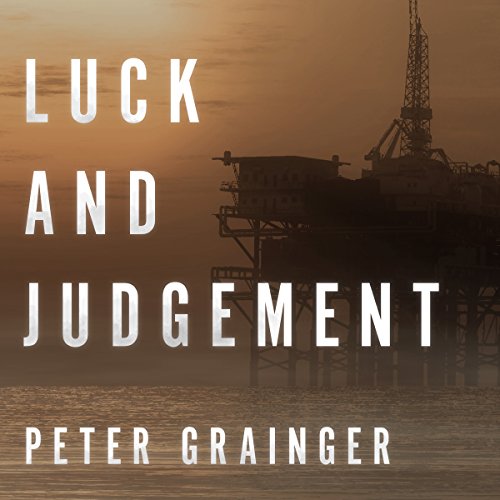 When a worker goes missing from a North Sea gas platform, there seem to be just two possible explanations - it was a tragic accident or a suicide. It does not take Smith and his detectives long, however, to discover that James Bell led a double life back onshore in Kings Lake, a life complicated enough to make him at least one dangerous enemy. Before the case can be unraveled, Smith must get a new team working together; Waters and Murray are still there, but one of Wilson's men is transferred to him, and the female detective constable from Longmarsh poses some unexpected problems for her new sergeant. Together they begin to investigate the links between the companies and the people that bring ashore the oil and gas, and they also find themselves caught up in the seamier side of life that exists beneath Lake's everyday comings and goings. Jo Evison begins to delve more deeply into the story of the Andretti murders, and Smith himself has to face the fact that he might no longer be considered fit for duty.

Best of series so far...hope we can get the remaining books soon

Peter Grainger is another of those rarer authors that one stumbles upon accidentally, but the happenstance is a good one. I enjoy this genre in general, but especially when the characters are well written, with some depth, and the interplay between the characters is meaningful enough for one to actually visualize and believe in them. I also especially appreciate intelligent characters who aren't written to make foolish or unintelligent decisions just to forward a plot point. Sgt. John D.C. Smith is a great example of what I consider well written. Excellent book. Top notch narration by Gilbert Jackson.

In Praise of a Truly Great Literary Work

Luck and Judgement: A DC Smith Investigation Series, Book 3, by Peter Grainger, narrated by Gildart Jackson. This is an enthralling detective story, or set of stories if you consider the series of as continuing tale of sixty-year-old plus cop doing what he can to continue being what he has always been: a uniquely superior investigative sleuth.

The books’ central theme is how to maintain the “joie de vivre” of life as one ages, and how to maintain oneself as relevant. It is a losing battle but lose can be ameliorated if we appreciate . . . life’s subtle rewards. The book is a compendium of those contemplations at the same time as it provides a thrilling search into what is likely a murder.

Is this book any good. well, I stumbled upon the first book of the series, “An Accidental Death,” on the daily deal just as I had decided to read for the second time in my life War and Peace by Tolstoy. One of my favorite books of leaning. After not being able to put the first of the D.C. Smiths series down, I went through all three editions of the series in quick succession. Not until I read through these unique and enjoyable texts, did Tolstoy come back into my vision.

In my earlier reviews of the preceding books in the series I explained there is always a philosophical bend to the story. The happenings are intriguing but they are metaphors for thinking about what makes life tick and what are our opportunities to get value from out life experiences and finally, how to consider those opportunities to give meaning to even the simplest of lives. One such discombobulation occurs in Luck and Judgment when our hero, D.C. Smith has an opportunity to consider whether a sixth sense is sometimes available to us as humans. His conclusion is that such does not exist, rather it is a compilation of life experiences that are archived and applied against forthcoming occurrences. Of course Grainger expressed himself more poetically than I explained his work here. There must be two hundred of such considerations as the very good and involving detective story is told and unfolds. It’s like taking a rational acid trip.

The plot involves a roustabout who goes missing on a gas platform in the North Sea. Eventually, his presumed accidental death, morphs into a murder story. The deceased is an awful person and the suspected murderer’s although not admirable persons, become unfortunate soles. Then there is the mistreated wife and daughter of the deceased roustabout. Their mistreatment is heartbreaking. So read the book for the full essence. Its Great!

I am always on the lookout for British Crime Mysteries, so I bought the first of this series because it was the daily deal last week. So glad I did! I went on to read all three books. This has a very Midsommer Murders feel about it. The older inspector, Smith, is very likable and the supporting characters are intriguing. The stories appear predictable but there is always a nice twist toward the end of the book that makes it well worth reading. If you're looking for a good British detective series without the true crime gore, this is highly recommended.

I stumbled onto this series when the first book came up as a special offer. Now I will be impatiently waiting for the fourth. Narrator is a great fit, and, if there is NOT a fourth book I will really miss these characters!.Very well written detective story.

This book is a "police procedural". What sets it apart is the character DC Smith. I find him a fascinating personality. He's an excellent police officer, and an excellent instructor to the younger officers he works with. He has recently become a widower and is near retirement age. It is the combination of all these factors that makes these books unique, interesting and entertaining for me.

The mystery here is a good one. It starts on an oil platform with the investigation of what is presented to the police as an accidental death. DC Smith has doubts about this from the very beginning. He and his team investigate and find the truth.

DC is also dealing with a physical problem which may prevent him from passing a required physical fitness test.

This is a steadily paced story with bits of understated humor and interesting characters. There is no explicit violence or an excess of coarse language.

There are more books in this series that are not yet available in an audio version. On his Facebook page the author stated audio versions are planned. I look forward to them!

an excellent read. Too often youth and glamour are the desirable qualities in a police procedural. Refreshing then, to read one where age and experience and dry humour carry the book. I enjoyed it very much indeed.

A RARE TREAT! Don't miss it!

I rarely ever listen to a series, one right after the other, but I have with this series! I love the aging, ironic, witty DC Smith and the whole cast of characters! Can't wait until Audible gets the rest of the books!

Book 3 in Series and Not Let Down Yet

I love this series and the characters, especially DC Smith. I feel like I am visiting good friends now that I am into the third book. The wit of the characters and cleverness of the mysteries keep me going. Usually when you get further into a police procedural series, you start to spot the weaknesses of the author. I have not been able to identify a single one as I am never bored and am constantly thinking about getting back to it. This series of books has been great for my exercise routine as I have gone much longer so that I can continue with the story.

Gildart Jackson is the perfect narrator for this series. He makes me feel like I am in the room where the story is happening.

When I say I feel like the characters are friends, it is the same feeling I get when I listen to stories by Michael Connelly, Adrian McKinty, Louise Penny and Craig Johnson. I want to find out what is going in with the lives of the characters as much as I want to figure out the mystery.

I wish Peter Grainger would publish actual books of this series as my father (who won't use a Kindle or Audible) would love them. Thanks for a great experience. Keep writing!

Both crime and philosophy 3.5 stars

The actual crime and investigation of this is really not that great, but the characters and the philosophical musings of DC Smith make it more than just average. I'd give this a 3.5 stars if I could.

There's a lot of considering the benefits of being a &quot;seasoned&quot; detective, and how we all benefit from both luck and judgement as we get older; neither alone is enough, but both are possible. Working with the &quot;next generation&quot; of cops and looking back on a career are strong themes that help make this an interesting police procedural. Maybe those on the shy side of 40 or those looking for thrillers might find it too long and slow.

Luck and Judgement is the third novel in the D.C Smith Series by British author Peter Grainger. All three have exceeded expectations and would receive more than 5 stars if more were available. These novels are outstanding. Detective Sargent Smith is a wonderful and very well developed character. Narration by British actor Gildart Jackson is just what novels of this extraordinary quality deserve. This novel and this series have my highest possible recommendation.

The next three novels in the series have been released but are not yet available in audio format.