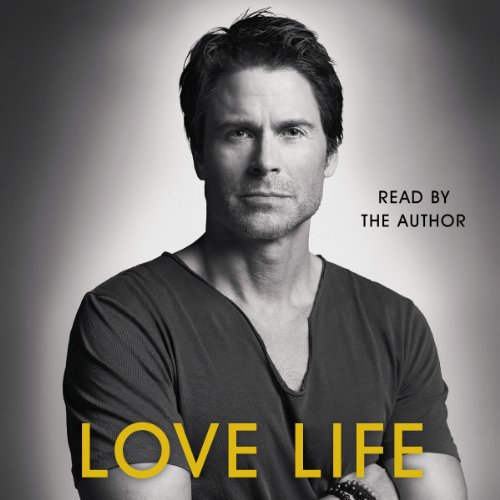 Actor, producer, and New York Times best-selling author Rob Lowe offers up a collection of personal stories in an honest and celebratory memoir about men and women, art and commerce, fathers and sons, addiction and recovery, and sex and love.

Actor Rob Lowe is an entertaining raconteur whose best-selling first audiobook, Stories I Only Tell My Friends: An Autobiography, was hailed as "self-deprecatingly funny" (The New York Times) and "thoroughly entertaining" (Time) and earned the author the cover of Vanity Fair.

Love Life serves up another delicious selection of intimate stories and observations from Lowe's life, told with humor, warmth, and brutal honesty. After writing his acclaimed debut effort, Lowe felt he had more stories to share and many more friends to introduce. The result is a touching memoir about the business and craft of acting, the pitfalls of success, family, love, and much more.

Among the many adventures Lowe describes in Love Life are what it's like in the trenches as both the star and producer of a flop TV show; how a visit, as a 20-year-old, to Hugh Hefner's Playboy Mansion led to a surprise in the hot tub; how an actor prepares for a role, as well as the practical, boots-on-the-ground details no drama or film school would ever teach you. You'll delight at the hilarious account of the time a major movie star stole his girlfriend, and of coaching a kid's basketball team dominated by omnipresent helicopter parents. The story of coming to terms with his son's departure to college for the education his father never got will touch anyone with a family.

Building on Stories I Only Tell My Friends, Love Life is the literary equivalent of returning to a favorite restaurant to savor a completely different, delicious new dish. If you love life, you'll love this audiobook.

Open, Honest, Sentimental... not quite as Intimate

In Rob Lowe’s first book he shared an intimate portrait of himself - sharing his vulnerabilities, his failures and successes, his friendships and loves. He was open and honest and humble. I came away from that book feeling as though he had allowed me to know his heart and I became a bigger fan than I had been before. Stories I Only Tell My Friends was a wonderful memoir from a man who was willing to learn from his mistakes and share those lessons with me. I loved it.

So, when Love Life was released I immediately added it to my audible.com Wish List. I finally read it yesterday and today. This sophomore effort is good - but not as good as Stories … was. Mr Lowe remains open, unpretentious and self-aware. He shares much about his love for his family and is particularly vulnerable when speaking of his two sons. He certainly allows us to see that he truly does love his life. But… at times I felt the book became a “how to” book for aspiring actors. Although I enjoy the glimpses into this world that I know nothing about, the reason I loved Stories … was that he opened his heart and mind and shared his inner self. That is what I was looking for in Love Life, He did it, but not as much, and I wanted more.

Having said that, I look forward to a third installment.

I read Rob Lowe's first book earlier this summer on the recommendation from a very well-read (think massive non-fiction tomes) friend, and I thoroughly enjoyed it. On the strength of my enjoyment of Mr. Lowe's first memoir, I picked this one up as a literature break. I listened to both books, and note that Mr. Lowe is an excellent narrator. His diction, affect, mimicry (he is a master vocal imitator) and expressiveness make him very, very easy and enjoyable to listen to. I am unsure how much I would enjoy reading this book - certainly I would not enjoy it more than listening to it and fear that I would like it somewhat less. Reviews are all over the place but I give this one 5 stars. Listen to it if you can. Classics are his recounting of a visit to the Playboy Mansion, creating a Bigfoot sighting for his boys whilst camping, and his insight into successfully authoring one's own life. I recommend, especially as an audiobook.

Good, But Not Great

Rob Lowe's first book set the bar super high and it's still one of my all time favorite Audible books. I was really excited about this new one. I would've loved for him to go into more detail about his early life in Malibu and tales from movies sets. As a sophomore effort this was just ok for me. I felt like it was a lot about his family life, more serious stories that would probably interest someone who is trying to be an actor and his struggle to deal with his kids leaving home for school. Although well written and read I just wasn't into it.

Have read both of his books and they are at times both laugh out loud funny, sadly
nostalgic, and gently insightful. Would
Recommend to anyone over 18 since there is some language.

An excellent reading by a sincere man who has grown to be so much more than mere "pretty boy". His stories, humor, and intelligence are inspired. Treat yourself to this book.

I've now read both of Lowe's books and have to say they are equally terrific. There's something special about an author reading his own book. I found Lowe's take on family, career, relationships and life's priorities refreshing. I look forward to his next book!

Much more than a memoir. Insightful, poignant. I highly recommend this book as well as Rob Lowe's first book, Stories I Only Tell My Friends. Excellent!

If you could sum up Love Life in three words, what would they be?

Congratulations to Rob for yet another biography that is filled with warmth, humility and love. So many young actors are emotionally stunted by the endless attention their good looks and talent affords them at too young an age. Clearly Rob navigated his early years fairly deftly, with only a few self admitted bumps along the way. He found his footing early on, and putting one foot in front of the other, is leading the life he has worked so hard to achieve. The stories he shares of his journey thus far, reflect a maturity and determination that is both impressive and inspiring.

Would you consider the audio edition of Love Life to be better than the print version?

I did not think he could top his first book, but this is terrific. Thoughtful, honest and funny. I want to meet his wife, Cheryl and spend an afternoon hang out with them at a BBQ. I highly recommend this next series of stories.

All of the stories and how he tells them. His self awareness is refreshing.

What does Rob Lowe bring to the story that you wouldn’t experience if you just read the book?

Hearing his stories in his own words and voice. It brought an honesty and warmth that just added to the book. Somehow he connects with his listener in a way that just reading it, would not have done.

Yes, I laughed and was so touched by the story of Buck. I felt a kindred spirit to what he has learned about himself at his age.

Thank you for sharing your stories and lessons Mr. Lowe.

A little light on content but the message ended up being great. It is not a new concept but he made it feel important again.