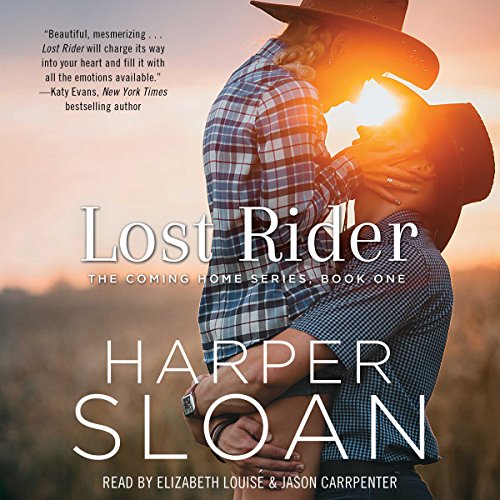 In Lost Rider, the first Western romance in New York Times and USA Today best-selling author Harper Sloan's Coming Home series, an injured rodeo star encounters an old flame, but will she be just what he needs to get back in the saddle?

Maverick Austin Davis is forced to return home after a 10-year career as a rodeo star. After one too many head injuries, he's off the circuit and in the horse farming business - something he's never taken much of a shine to, but now that it's his late father's legacy, familial duty calls. How will Maverick find his way after the only dream he ever had for himself is over?

Enter Leighton Elizabeth James, an ugly duckling turned beauty from Maverick's childhood - his younger sister's best friend, to be exact, and someone whose heart he stomped all over when she confessed her crush to him 10 years back. Now Leighton is back in Maverick's life, no longer the insecure, love-stricken teen - and Maverick can't help but take notice. Sparks fly between them, but will Leighton be able to open her heart to the one man who broke it all those years ago?

Written in the vein of Diana Palmer and Lindsay McKenna, this Texas-set series is filled with sizzle, heart, and plenty of cowboys!

Rodeo star Maverick Davis has had one too many falls and now that his career is over, he must decide what he wants to do next. When he learns of his father’s death, he must go home to Pine Oak, a place he left years ago vowing to never return.

Hometown girl Leighton James has always carried a torch for Maverick. He’s been gone for years and she’s managed to move on and create a life for herself. Maverick and Leighton soon realize their feelings haven’t changed, it's just been on pause all these years.

I love author Harper Sloan. This is her first western and it’s the first book in The Coming Home series. It’s fantastic! Maverick and the rest of the Davis family has significant baggage, so this is going to be an exciting series to watch unfold. There’s plenty of angst in this one, but none of it is contrived. There are serious issues to be resolved and I’m looking forward to going along for the ride.

This nearly 10-hour audiobook is a dual narration by Elizabeth Louise and Jason Carpenter. I like this match for the series and hope both narrate the entire series. I have to take a moment and fangirl about Jason Carpenter, where has he been? I’ve never heard of him before. That voice! He can read to me anytime! He goes to the top of my list of male narrators. I will be searching to see what else he has narrated and add them all to my list!

You don’t want to miss this series, I can’t wait for the next audiobook.

If you like a very LOVEY DOVEY type second chance romance this book is for you. I liked the story line and the characters but this might have been a little too much "romance" for me. I don't mean to say that is bad or that their story is sweet and sappy, I just mean that the book revolves around their relationship and once they end up in each others arms they only talk about how much they belong together, how they love each other, how they need each other and how they are going to be together forever. Like I said, not like that is a bad thing but I like a little less love talk and a little more action. Besides that I love the story line and that these two characters have always known they are meant for each other. I love when the characters have a past, that really helps make the love story work for me.

The narration was really good. Loved them both bot these characters.

Main character was an ass...

I’m so over books where the hero is excused for being selfish and bad mannered. I just want to say grow up, its not appealing, I don’t care what excuses your given, bad behaviour is bad behaviour. For goodness sakes, this story shows how one selfish, entitled idiot managed to harm someone he was supposed to be friends with so badly that she believed she needed to get surgery to fix the fault. Neither hero or heroine were very appealing - the story stort of meandered predictably. I gave it 3 stars because the writing was good enough and the basic concept was fine, the performance was great by the readers, I guess I’m just over annoying characters who are just boring and self-centred

If mind numbing cheesiness​ is what you need, this well performed book will fit the bill. The characters are fun, but the dialogue is elementary & lazy in word choice.

This book is ok, the story is good but I have read several that are very similar. The female narrator was horrible, I had a very hard time listening to it.

This appeared like a simple second chance love story, but it was much deeper than that. this story deals with lost young love, the pain of abuse and the bond of family. this author is wonderful at writing beautiful and passionate love scene . the were excellent. I will listen to book two.

I loved this story. It’s full of so much emotion . It made me laugh and it made me ugly cry. My favorite part though is the love between Leigh and Maverick it felt so real that even though they’re fictional I could I feel it pounding in my heart. Looking forward to reading and listening to the next one.

I love this story. It was beautifully written and the narrator's did an awesome job!! Maverick is breathtaking.

An occasional FU is one thing... but the whole 1st chapter and beginning 2nd chapter (really wanted to give this book a chance) had f..k in just about every sentence spoken by the character. I found this way of speaking uncomfortable to listen to. In addition, hundreds of books have been written and get the point across without using cuss words in their vocabulary. Returned the book.

A rodeo star returns home after one too many head injuries to find his little sister's best friend whose heart he broke years ago still around. The two struggle to put past hurt aside and navigate through old and new attraction. Fair amounts of profanity and fairly graphic sex, which could be more than some readers would prefer. #PastMeetsPresent #Provocative #Happy ending #SecondChanceRomance #Texas #tagsgiving #sweepstakes