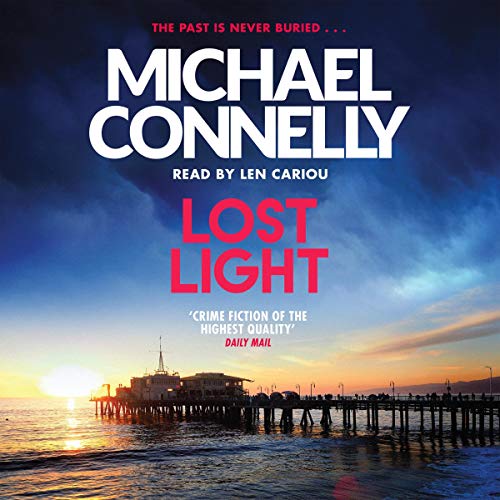 When he left the LAPD, Bosch took a file with him: the case of a production assistant murdered four years earlier during a film-set robbery. The LAPD thinks the stolen money was used to finance a terrorist training camp. Thoughts of the original murder victim were lost in the federal zeal, and when Bosch decides to reinvestigate, he quickly falls foul of both his old colleagues and the FBI.

When the investigation enables him to meet up with an old friend, shadows from his past come back to haunt him.

One of the most pleasant audio books to listen to

A great Bosch story and an excellent reader, but this book felt like a late night radio story. A very beautifully unique experience

starts slow but gets better by the hour

starts slow but gets better by the hour, over all a nice piece in the series

I must have read it 3 times in 10 years. It’s a blessing to be able to forget all the details and rediscover the intricate details of the plot.
Just finished listening to this version by Cariou and enjoyed it so much I can’t wait to be 5 years from now with my memory obliterated again.

one of the best so far!

I could have not stopped listening! I nearly had to take a day off to hear the end of this. Great plot, good narration, No.1 for me.

Typical Bosch brashness when he bombastically focuses on the goal - solving an incomplete, old murder case.

Only negative is the silly music in the story which I really dislike, that's why performance gets 3 stars. I also find the music inappropriate.

Harry Hole novel- always a winner with me.

Wonderful escapism for me. Now have books on 'Audible ' - winner idea - I can get on with my chores and listen to my books at the same time. So enjoy Harry- his morals are excellent.

Audible, get your act together

I'm totally over it. Audible offers all these series with a couple of strategic titles missing. They've done it with the Pendergast series, the Jack Reacher series and now with Harry Bosch! The titles that are missing are integral to the ongoing story. What's the point in offering a series with the important titles missing. I have really enjoyed the Harry Bosch series but with the one missing before this, I'm totally lost to an obviously important piece to the overall story. If you haven't heard/ read the title before this, I suggest you go no further. Harry is no longer with the LAPD but I have no idea how this came about. I'm seriously considering moving to another audiobook provider