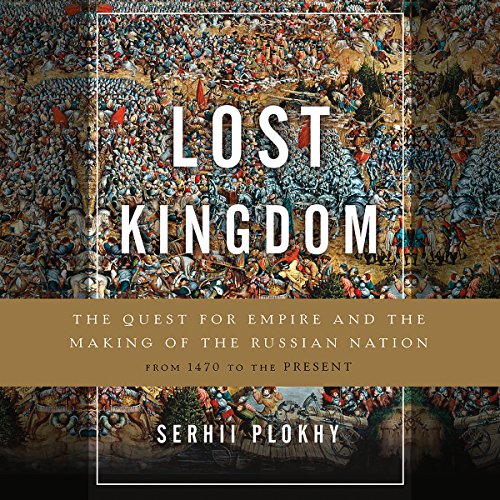 From a preeminent scholar of Eastern Europe and the prizewinning author of Chernobyl, the essential history of Russian imperialism. In 2014, Russia annexed the Crimea and attempted to seize a portion of Ukraine - only the latest iteration of a centuries-long effort to expand Russian boundaries and create a pan-Russian nation. In Lost Kingdom, award-winning historian Serhii Plokhy argues that we can only understand the confluence of Russian imperialism and nationalism today by delving into the nation's history. Spanning over 500 years, from the end of the Mongol rule to the present day, Plokhy shows how leaders from Ivan the Terrible to Joseph Stalin to Vladimir Putin exploited existing forms of identity, warfare, and territorial expansion to achieve imperial supremacy. An authoritative and masterful account of Russian nationalism, Lost Kingdom chronicles the story behind Russia's belligerent empire-building quest.

"In Lost Kingdom, Serhii Plokhy does for Russia what only great historians can do - make the connections between the distant past and vital present feel relevant and alive. He brings Russia's centuries of struggle with nationalism and imperialism into the near focus of Vladimir Putin's ongoing invasion of Ukraine and annexation of Crimea. Lost Kingdom carefully and colorfully relates how the fires of history and myth burned from before the first tsars to Peter the Great, through the Bolsheviks, World War II, and the fall of the Soviet Union. With Russia everywhere in the news today, and every pundit pretending to be an expert, Lost Kingdom is essential reading for those wishing to understand Russia beyond the headlines." (Garry Kasparov, author of Winter Is Coming: Why Vladimir Putin and the Enemies of the Free World Must Be Stopped)
" Lost Kingdom is an erudite exploration of the contradictions of Russian nationalism, whose history shows it to be both inclusive and exclusive, universalistic and identitarian, often in quick succession or even simultaneously. A master historian on top of his game, Serhii Plokhy lays out the challenges this past presents for transforming Russia into a better country for its people and its neighbors." (Odd Arne Westad, author of The Cold War: A World History)

Excellent overview for someone like myself who isn’t familiar with Russian history. Highly recommend. Yep.

An extraordinary and detailed analysis of Russian Aggression to Recapture its Lost Kingdom … and for the 21st Century, Putin’s War of Aggression to force formally Independent Countries into a renewal of a Russian empire, despite a series of International Treaties to honor Crimean, and Ukrainian independence in exchange for Russia taking all the former USSR’s nuclear weapons!

Great analysis of Historical Russian mindset. very entertaining enjoyed the emphasis on culture and the struggle to define Russia after the collapse of the soviet identity.The ending of the book seemed very biased towards Ukraine but its nearly impossible to get the other side of the story anywhere. one line really stood out to me about how russia had a plan to be the representative of conservative values to the west and this was to divide the west. this idea is key but i think the author does not understand how powerful the concept is as many traditionally minded people feel alienated in their own counties in light of the rapid exposure of what liberal values lead to. i think the framing of russia as the villain in the story is not accurate when taking a wide view based on their struggle and the long multi century reality of Rusaphobia that continues to thrive in the western mind.

More like a history of Languages spoke in Russia.

This book was interesting in the first 2 parts but then it became technical with who spoke what language where and who were the major poets that pushed reform.