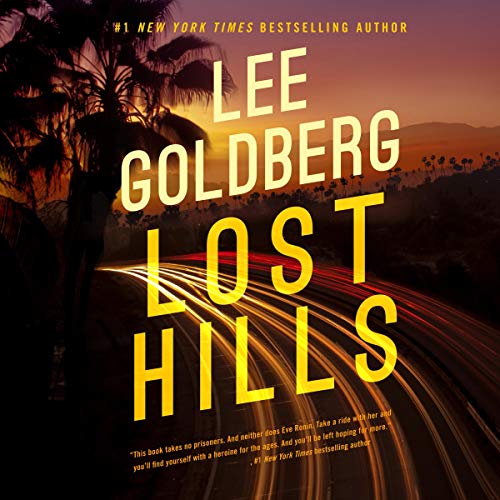 “Lost Hills is Lee Goldberg at his best. Inspired by the real-world grit and glitz of LA County crime, this book takes no prisoners. And neither does Eve Ronin. Take a ride with her and you’ll find yourself with a heroine for the ages. And you’ll be left hoping for more.” (Michael Connelly, number one New York Times best-selling author)

“Thrills and chills! Lost Hills is the perfect combination of action and suspense, not to mention Eve Ronin is one of the best new female characters in ages. You will race through the pages!” (Lisa Gardner, number one New York Times best-selling author)

A video of Deputy Eve Ronin’s off-duty arrest of an abusive movie star goes viral, turning her into a popular hero at a time when the Los Angeles County Sheriff’s Department is plagued by scandal. The sheriff, desperate for more positive press, makes Eve the youngest female homicide detective in the department’s history.

Now Eve, with a lot to learn and resented by her colleagues, has to justify her new badge. Her chance comes when she and her burned-out, soon-to-retire partner are called to the blood-splattered home of a missing single mother and her two kids. The horrific carnage screams multiple murder - but there are no corpses.

Eve has to rely on her instincts and tenacity to find the bodies and capture the vicious killer, all while battling her own insecurities and mounting pressure from the media, her bosses, and the bereaved family. It’s a deadly ordeal that will either prove her skills...or totally destroy her.

“Lost Hills is what you get when you polish the police procedural to a shine: a gripping premise, a great twist, fresh spins and knowing winks to the genre conventions, and all the smart, snappy ease of an expert at work.” (Tana French, New York Times bestselling author)

“An energetic, resourceful procedural starring a heroine who deserves a series of her own.” (Kirkus Reviews)

“This nimble, sure-footed series launch from bestseller Goldberg…builds to a thrilling, visually striking climax. Readers will cheer Ronin every step of the way.” (Publishers Weekly)

“A cop novel so good it makes much of the old guard read like they’re going through the motions until they can retire…the real appeal here is Goldberg’s lean prose, which imbues just-the-facts procedure with remarkable tension and cranks up to a stunning description of a fire that was like ‘Christmas in hell.’” (Booklist)

Local Calabasas resident writing an LASD story without doing any research. LASD doesn’t have a robbery homicide unit. That’s LAPD. They have a Homicide Bureau out of Monterey Park, not at Lost Hills Station. The crime lab is not referred to as CSU out of Cal State LA not in Monterey Bay. Not even close to a Bosch novel who at least makes it somewhat believable.

The prolific Lee Goldberg introduces a new series with Lost Hills, starring newly minted L.A. County Sherrif's Department homicide detective Eve Ronin. Even as he continues to add entries to his Ian Ludlow series, the next one due in April, he has now started the Ronin series, set in and around his own hometown of Calabasas, with #2 due in early 2021.

Eve is an inadvertent YouTube hero, which her fellow detectives resent and her mother thinks she can parlay into an acting career. She is immediately thrust into a triple homicide investigation at the start of the short and quick Lost Hills, and solves most of it herself, sometimes against orders from her superiors.

I noted in my review of the upcoming Ludlow book Fake Truth that I could easily sum it up just by saying, Lee Goldberg does it again! I can't say that about Lost Hills. Although it's good, quick, and addictive, it reads like an ordinary episode of a TV police procedural. It lacks the depth of Harry Bosch, which it is clearly modeled after (Eve even listens to a Bosch auidobook and analyzes him in her mind).

Most of the clues Eve solves come too easily, too quickly -- rarely is she stymied once she decides to pursue something. Yet the major clue that brings the case together for her is one she misses -- even though as a reader, it was obvious right from the start. It strains credulity that she overlooked it for so long.

One of the other things I love about Lee Goldberg is that despite writing genre fiction, he always take care to craft good characters. He tries to do so with Eve, but for me, I feel like everyone here from Eve on down is a stock character, characters we have seen many times before. The only thing somewhat new is her YouTube fame, but even that has become a worn trope (social media influence in general, not necessarily YouTube).

So I'm somewhat disappointed that Goldberg has, for the first time in six of his novels that I've read in the past 18 months, not done it again. Maybe it's me, maybe it was inevitable that I would grow over-accustomed to his style. But I don't think so -- I just read Fake Truth last month and loved it. I just felt these dots connected too quickly, except for a key dot that should have connected quickly but didn't.

Wow! This is a very good book! Eve Ronin is a new homicide detective. The youngest on the force. She was caught on video taking down a popular actor who was sexually harassing a woman in a parking lot. The video went viral and Eve became a celebrity cop. The city needs public approval and gave her a choice of departments to be promoted to. It’s difficult to run an effective investigation when to rest of your department either doesn’t take you seriously or resents you for having such good luck.
A woman and her two children are murdered. There’s lots of blood but no bodies. Eve’s soon to retire partner puts her in charge of the investigation. She finds clues, conflicts and strikes deals to further the investigation. With a shockingly good ending!
Nicol Zanzarella does a fantastic job narrating.
This book is very HIGHLY RECOMMENDED.
If you found this review helpful please indicate so.
Thank You.

Thoroughly enjoyed this book. Read it in two sittings. It would have been one sitting but I had to sleep. Eve, the protagonist, is young and inexperienced, but smart and willing to learn. Eve is assigned a very tough case – a home saturated with blood and evidence of murder of a mother, her two children and their dog. It is apparent that bodies have been dismembered, but no bodies or body parts can be found. Eve’s investigative skills quickly identify the man she knows is responsible for the crime but the evidence is thin. Eve must get more evidence, preferably the bodies, and she must get it quick. Time is running out.

There are parts of the story, as some reviewers point out, that require the reader to suspend reality just a little bit. But what the heck. This is fiction and it is exciting. One reviewer criticized the book because the author used names of police departments that do not exist in Los Angeles, but again, what the heck. I live in SC and didn’t know the names were wrong and did not care. The names of faciliities is irrelevant to my enjoyment of the book. When reading or listening to fiction, I mainly want to be entertained and Lee Goldberg definitely entertained me with Lost Hills. The characters are interesting, the dialog is good and the story definitely held my attention. The narrator, Ms. Zanzarella, is extremely talented. I just listened to Jane Doe which she also narrates and was extremely impressed. It is evident that she reads and understands the book before she records the performance. It is evident because her emphasis is right on cue, the excitement level is perfect and she gives distinct personalities for each character. I hope Goldberg comes out with the sequel to Lost Hills and that Ms. Zanzarella is the narrator.

Could not finish this story — I got a headache listening to the narrator. The overuse of identifying who made nearly every remark and reply is unnecessary and disrupts the flow.

Good pace, straightforward story: a single plot, no romantic interest-just a female detective and one case with twists.

Lee Goldberg writes for excitement and enjoyment; and he delivers. People who wish to nit pick novels for realism will not enjoy his works. Narrator Nicol Zanzarella is among the very best. She never disappoints.

I loved the different take on a female detective and how she got where she was, or at least what got someone to take notice of her. I enjoyed that Eve Ronin got a chance to prove the naysayers wrong by proving how her skills as a detective and keen observer are really what made her a heavy hitter.

The twists and turns are what I've come to enjoy in books by Lee Goldberg and this one did not disappoint. He has a great balance of character development with the fast pace action of a thriller.

I thoroughly enjoyed the narrator of this book and it was read as I imagine hearing the story in my head. The narrator's tone and emphasis were perfect to keep my interest through the details of a police procedural and the emotions of the detective working her way through the crime.

Wonderfully engaging and quick moving read... Nice story w/ good procedural aspects... Only really one character, but she’s the series lead and leads well... Good all the way through, and great at the end... Read it in a sitting w/ no breaks, that’s 5* material as far as Im concerned;). p.s. it’s a read and listen for free on Kindle Unlimited, which makes this a no brainer...