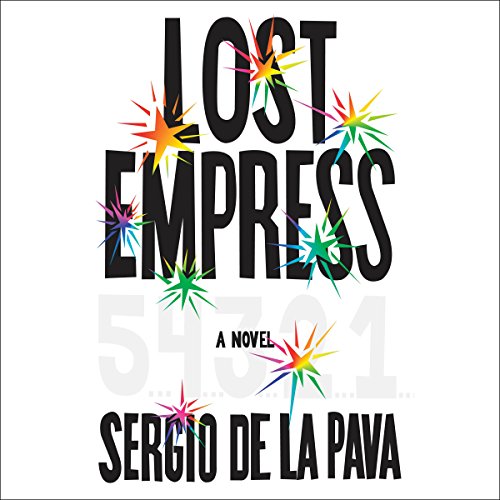 From the acclaimed PEN/Robert W. Bingham Prize-winning author of A Naked Singularity, a shockingly hilarious novel that tackles, with equal aplomb, both America’s most popular sport and its criminal justice system.

From Paterson, New Jersey, to Rikers Island to the streets of New York City, Sergio de la Pava’s Lost Empress introduces listeners to a cast of characters unlike any other in modern fiction: dreamers and exiles, immigrants and night-shift workers, a lonely pastor and others on the fringes of society - each with their own impact on the fragile universe they navigate.

Nina Gill, daughter of the aging owner of the Dallas Cowboys, was instrumental in building her father’s dynasty. So it’s a shock when her brother inherits the franchise and she is left with the Paterson Pork, New Jersey’s failing Indoor Football League team. Nina vows to take on the NFL and make the Paterson Pork pigskin kings of America. All she needs to do is recruit the coach, the players, and the fans.

Meanwhile, Nuno DeAngeles - a brilliant and lethal criminal mastermind - has been imprisoned on Rikers Island for a sensational offense. Nuno fights for his liberty - while simultaneously planning an even more audacious crime.

In Lost Empress, de la Pava weaves a narrative that encompasses Salvador Dalí, Joni Mitchell, psychiatric help, emergency medicine, religion, theoretical physics, and everything in between. With grace, humor, and razor-sharp prose, all these threads combine, counting down to an epic and extraordinary conclusion.

The Theorist, read by Geoffrey Campbell

“As with the author’s debut novel, A Naked Singularity (2012), the New York City criminal justice system figures prominently, its jargon and bureaucratic instruments providing realist texture, while its absurdities and cruelties fuel the fury that is this novel’s molten core. Again we witness De La Pava’s gleaming wit, philosophical benders and popculture fixations, and the sheer intensity with which he hurls his words in this even more assured work of incandescent literary maximalism.” (Booklist, starred review)

“Extraordinary... De la Pava is a maximalist worldbuilder, and the incredible multiverse he constructs in this book establishes him as one of the most fearsomely talented American novelists working today.” (Publishers Weekly, starred review)

“If Thomas Pynchon and Elmore Leonard had conspired to write North Dallas Forty, this might be the result: a madcap, football-obsessed tale of crossed destinies and criminal plots gone awry... [ Lost Empress] is a blast to watch unfold. A whirling vortex of a novel, confusing, misdirecting, and surprising—and a lot of fun.” (Kirkus Reviews, starred review)

From the get go I had no idea where this thing was going or what it was about. And I really tried. I listened to quite a bit of it and then I just gave up. A waste of my time. Sorry, other may think it a masterpiece but I couldn't continue with it. No thanks.

Digressions for Fun and Profit

But I Digress. That could be another name for this novel. (It could also be the name for A Naked Singularity).

This is not a bad thing.

And a lot more.

It is funny and deep. And silly and shallow. And also a great performance! Ballerini is just right as the main narrator, but the many members of the full cast do wonderful jobs with their roles. Hearing their performances made me realize what a fantastic job De La Pava does with dialogue.

Give it a shot.

Very entertaining novel. Excellent full narration cast. Super puzzling ending. Not sure how it shapes the rest of the novel. But its musings on the criminal justice system and on the nature of time are superb.