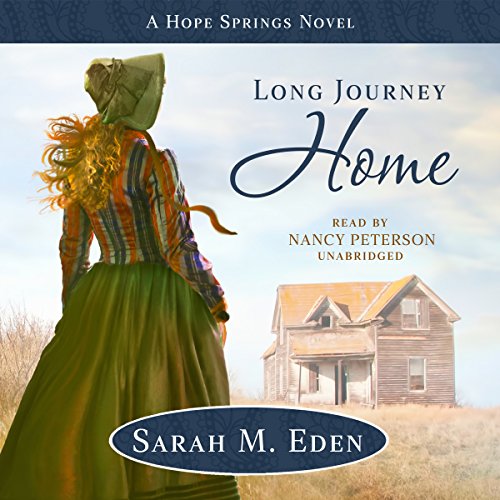 Widowed by war, Maura O'Connor has raised her son alone under the weight of poverty in the unforgiving slums of New York City. That harsh and difficult life has taken a toll on them both. Desperate to save her son from the misery around them, she moves them both to the tiny Western town of Hope Springs, where her late husband's family lives, hoping the decade of silence between them does not mean she and Aidan will be rejected outright. Her son needs family, and she would endure anything to see him happy.

Ryan Callaghan has worked the land belonging to the late Granny Claire for years, dreaming of one day claiming it as his own. Living in his brother's home affords him no freedom, no stability, no joy. The arrangement is even harder on his mother, whose health is quickly deteriorating. A risky investment in the land has finally begun to pay off, and he is at last in a position to secure a better future for them both. When use of the home is, without warning, offered to a newly arrived widow and her son, that future is entirely uncertain.

Both Maura and Ryan desperately need the Claire farm, for their own futures as well as those of the loved ones who depend on them. Neither can remain in Hope Springs without the house and land, but only one can claim it in the end.

This book kept me entertained as i worked around the house or exercised or drove...I enjoyed hearing it, but it wasn't like I was dying to turn it back on to find out what happened next. The narrator was very good and I enjoyed revisiting characters from Sarah's other books.

and it was ,what a good strong family coming together and helping each other weak in the romance department but still a good read the narrator did well

The story of Maura and Ryan is a sweet one. Maura has an illness brought on by working in the factories. She hasn’t worked in the factories for a while but her coughing hasn’t improved. She finally sees a doctor and finds out her prognosis. She decides she needs to move out west to live with her in laws so her son has a home if she dies.
Ryan faces his own difficulties. When Maura arrives Ryan fears that life has just gone down hill for him. Ryan is afraid that the land he hoped would be his will now be out of his reach. But he faces with the kindness is part of who he is.
Ryan and Maura are both kind souls. They both have faced difficulty. It is enjoyable to see them develop an affection for one another.

My very favorite so far from this beautiful series!

Love Ryan and, his noble, kind and breath of fresh air dementor. Ryan meets his soulmate which is equally his match. It’s sad, it’s beautiful and, it’s a great story. A story, with just the right amounts of sweet and horrible thrown in. Narrators Performance was brilliant! Bravo!

Continuing story of Hope Springs - The first two books captured my heart. Sarah Eden is a great author and her stories of the families in Hope Springs are so close to what happened between the Irish and those that settled there.

People had a hard life but they found joy in their hardships.

Great family series and I encourage you to listen to with family members. A greater appreciation for what we have can be found within these pages.

Long Journey Home Brings Another excellent Hope Springs story. I wish I had read this one in order. Sarah M Eden is one of my favorite authors.
- Both Maura and Ryan desperately need the Claire farm. Neither can remain in Hope Springs without the house and land, but only one can claim it.

this book is the continuation of her long journey home series. It'll tug at your heart strings but not a tear jerker. This book could stand alone but you will understand, love, and cheer for nearly every character if you've read her other books in the series. I really enjoyed this book BUT One thing did bother me. ok, two things: (I have to preface this with the fact that I am an avid Sarah M. Eden fan and I have never before seen such glaring oversight in her plot lines before. Ever. But, if you overlook that, this book is excellent.) First was the obviousness of the solution which was never obvious to the characters somehow. Second: *spoiler alert* the very assumption that a family, esp your dead husband's family that you haven't had contact with for 10+ years. (not even taking into account that you are struggling with the fact that they may or may not be accepting of you) will just gift you a house with acreage (bigger than their own no less) is rather grandiose don't you think? Simply because they offered you the use of the house temporarily does not mean they are giving it to you. And rather presumptuous that they can even AFFORD to give it to you. Esp when they, themselves, are struggling to keep their own heads above water and have a baby on the way. AND that have a good family friend who desperately needs the house and land, whom they have been leasing it to for years, ready and willing to buy the land/house from them. Like I said: big, gapping hole. The likes of which I have never seen in a Sarah Eden.

I can always count on Sarah Eden for an amazing book!

Wonderful narrator and story! I love the hope springs books, they are not all fluff and happiness, they are full of ups and downs just like true life. Can’t wait for the next book!

I love the story, read all five

I love all five books of the family in Hope Springs. this was a great addition to add to continue the story of the sons lost from the war.

This book has 46 chapters. I enjoyed the book immensely but I read the first three books in this series. And, yes, it definitely takes 12 hours and 31 minutes to get through. I was sorry to have it end as I wanted it to continue and tell me what was going to happen with Mora and Ryan and Mora's son Aidan. I got totally wrapped up in this book.