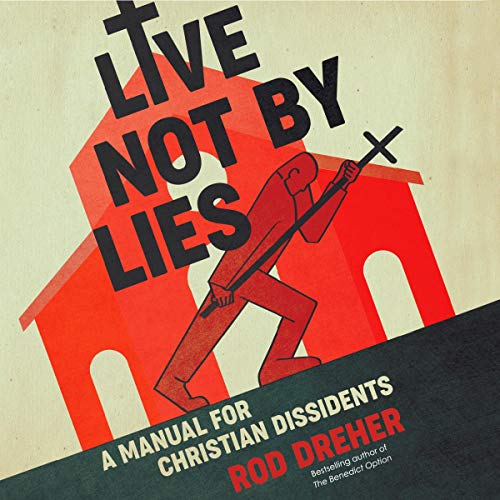 Live Not by Lies

The New York Times best-selling author of The Benedict Option draws on the wisdom of Christian survivors of Soviet persecution to warn American Christians of approaching dangers.

For years, émigrés from the former Soviet bloc have been telling Rod Dreher they see telltale signs of "soft" totalitarianism cropping up in America - something more Brave New World than Nineteen Eighty-Four. Identity politics are beginning to encroach on every aspect of life. Civil liberties are increasingly seen as a threat to "safety". Progressives marginalize conservative, traditional Christians and other dissenters. Technology and consumerism hasten the possibility of a corporate surveillance state. And the pandemic, having put millions out of work, leaves our country especially vulnerable to demagogic manipulation.

In Live Not by Lies, Dreher amplifies the alarm sounded by the brave men and women who fought totalitarianism. He explains how the totalitarianism facing us today is based less on overt violence and more on psychological manipulation. He tells the stories of modern-day dissidents - clergy, laity, martyrs, and confessors from the Soviet Union and the captive nations of Europe - who offer practical advice for how to identify and resist totalitarianism in our time. Following the model offered by a prophetic World War II-era pastor who prepared believers in his Eastern European to endure the coming of communism, Live Not by Lies teaches American Christians a method for resistance:

Aleksandr Solzhenitsyn famously said that one of the biggest mistakes people make is assuming totalitarianism can't happen in their country. Many American Christians are making that mistake today, sleepwalking through the erosion of our freedoms. Live Not by Lies will wake them and equip them for the long resistance.

A Must Read For All Christians!

The comparisons of the communists’ takeover of Russia and the socialist’ taking over America are very awakening. The testimonies of actual religious prisoners, and the tortures they withstood, along with the memories of their fellow prisoners, who were brutally executed, are difficult to hear. But hear it you must. America is on the same path! We willingly GIVE the information the Russian authorities were seeking and using, to the internet to be used against us!! Please Read And Become Aware!

This book should be a Great Awakening for Christians.

Although very scary, one sees the imprisonments of Soviet Christians as similar to the imprisonment of Paul. We in the west have not endured this, but if we do not awaken, this may become reality since “soft” Totalitarian government has already begun.

Excellent book! Best book since 1984. This will be a go to book for next 20 years

#WakeUpSleeper... history will repeat itself

Listening to this book amplified my thoughts about how can a child of a parent or grandparent from Eastern Europe, Cuba, Venezuela not are what’s coming if Democrats win in 2020. Then I look in the mirror and realize we all need to wake up!

Brings home how fortunate we have been, and how seriously we need to consider the future if Christianity is to survive.

Excellent diagnosis and prognosis of our current crisis. Remember, we were born for this moment. Embrace it with love, hope, courage and wisdom.

Not a new faith, but a new era for the American Christian. We are looking around us and wondering why we aren't all responding to the soft totalitarianism that we see the same way. Frustrated, but trying really hard to live out Christ's love and grace around us. we know what our job is in the world, but now we're really having a hard time fulfilling this calling. This struggle is what made me leap into this book when I heard about it. Not a conspiracy theory, but a history lesson ans a practical comparison. The author gives us sensible suggestions for what we can do right now. I'm thankful this book was written, God continues his work to educate me and prepare me for what he sees will come my way. to him be the glory.

It Is Happenings Here

Globalism and totalitarianism are first cousins wrapped in different packages. The weapon of choice today is technology and culture, not guns and gulags, at least not yet, but the end game remains the same.

He who has ears, let him hear

We must open our eyes while there is still time. This is such an important message for our times and a people being slowly simmered as the proverbial frog in the pot.

a must read for every freedom-minded American

very eye-opening a bit frightening but definitely a call to action for the faithful to be prepared for what is already here and what continues to come.