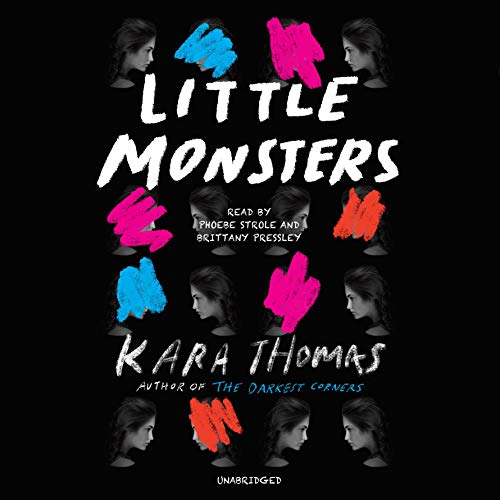 For fans of Pretty Little Liars, Little Monsters is a new psychological thriller from the author of The Darkest Corners, about appearances versus reality and the power of manipulation among teenage girls.

Kacey is the new girl in Broken Falls. When she moved in with her father, she stepped into a brand-new life. A life with a stepbrother, a stepmother, and, strangest of all, an adoring younger half sister.

Kacey's new life is eerily charming compared with the wild highs and lows of the old one she lived with her volatile mother. And everyone is so nice in Broken Falls - she's even been welcomed into a tight new circle of friends. Bailey and Jade invite her to do everything with them.

Which is why it's so odd when they start acting distant. And when they don't invite her to the biggest party of the year, it doesn't exactly feel like an accident.

But Kacey will never be able to ask, because Bailey never makes it home from that party. Suddenly Broken Falls doesn't seem so welcoming after all - especially once everyone starts looking to the new girl for answers.

Kacey is about to learn some very important lessons: Sometimes appearances can be deceiving. Sometimes when you're the new girl, you shouldn't trust anyone.

"A twisted story of obsession and manipulation, Little Monsters captivated me right up to its surprising conclusion - and left me wondering how well I really know my friends." (Chelsea Sedoti, author of The Hundred Lies of Lizzie Lovett)

I'm am pleasantly surprised this was so good! I finished it in like 36 hours. I really recommend it! You grow to know the characters, and think you know who is the killer but then it all goes back to square one! For such young characters, it was really entertaining to me and I don't read a lot of YA!

First and foremost, that twist ending had my jaw on the floor. This author knows how to keep you guessing the whole way through. I don’t want to say much more, other than you need this book in your life! ...and the narrators did a stunning job. Loved it.

Great story, could have done without the swearing especially for a YA book.

I gave the overall performance a 3 star. I wasn’t fond of the vulgar swearing. There was a lot, a little too much to be believable for teenage girls. The author used phrases frequently. “After a beat”, “For a beat.”... are a few examples. Other than that I enjoyed the story, it was read well and I was entertained.

Excellent Book That Lives Up to the Hype!

This is a book that could easily be compared to Gone Girl, and it lives up to the praise. This was a wonderful novel with plenty of twists, right up to the very end. I loved it because I did not try and over think and enjoyed the ride. It surprised me due to the fact that I was still guessing until the last minute. This is an author I will read again! This is a great read for Gone Girl fans, fans of PLL, or just a good, twisted tale. The narrator did an outstanding job and really made the characters distinctive and separate. The characters came to life due to her talents. Favorite audio in a long time. Highly recommend.

Guys, buy this audio book. The performance was fantastic, but the story was incredible. The main characters were so well-developed and interesting. Five stars for sure.

kept me guessing and listening

Enjoyed this book all the way through and finished quickly as I enjoyed so much.
I had to speed up narration, as narrater was a bit slow, and the pauses inbetween sentences were a bit longer than needed, at least for me.
Good writer and story teller.. Will look at more by this author.

It was OK, Not my favorite

The book was good. It had a nice twist to it but not a lot of drama/conflict. I was expecting more.

The Narrator had a good clear voice but she pauses a little bit too much.

Keeps You Guessing the Whole Time!

I really enjoyed this book! I finished it really quickly, even cutting into my sleep time because I wanted to know what happened! For once I did not guess correctly or know the possible outcome of the story. Usually I can see where the plot is going, but right when I think I have it all figured out, the author adds in something else and I'm second guessing myself and have to think about it all over again. The narrators were a great part of this story and flowed together perfectly, at first I couldn't even tell that there were two narrators. This book was well worth the credit I used, and I hope to read/listen to more from this author in the future.

I really enjoyed this book, it's not too often I can't decipher the plot and ending of a book half way through it. This book kept me guessing until the very end!!! I loved most of the characters, you'll understand what I mean by that after you read the book, and found the main character easily relatable. The author definitely showed that not everyone is as they seem and that the secrets we hold dear may paint ourselves in a completely different light than we show the world. Cannot recommend this book enough!!!

for a young adult book this book is great. I highly recommend this for anyone not just children.