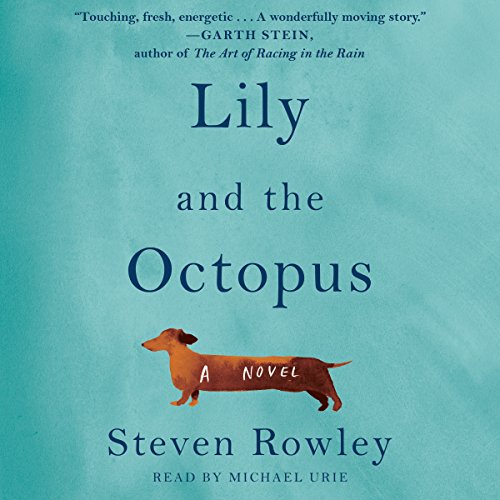 Lily and the Octopus

Lily and the Octopus

Combining the emotional depth of The Art of Racing in the Rain with the magical spirit of The Life of Pi, Lily and the Octopus is an epic adventure of the heart.

When you listen to Lily and the Octopus, you will be taken on an unforgettable ride. The magic of this novel is in the listening, and we don't want to spoil it by giving away too many details. We can tell you that this is a story about that special someone: the one you trust, the one you can't live without. For Ted Flask, that someone special is his aging companion, Lily, who happens to be a dog.

Lily and the Octopus reminds us how it feels to love fiercely, how difficult it can be to let go, and how the fight for those we love is the greatest fight of all.

Remember the last book you told someone they had to listen to? Lily and the Octopus is the next one.

"Michael Urie narrates with a heartfelt passion that makes one giggle and laugh, nod in understanding and sob with sorrow. Urie's authentic emotion comes out in every character, whether it's Lily the dog's excitement, Ted the human's frustration, or the nameless octopus's apathy." ( AudioFile)

wow.. how does this book have such great reviews? ok.. it isn't terrible, but it sure does get pretty close, especially in the first 2/3rds.

And it isn't like I have issues with the 'dog voice'. LOVE Chet n Bernie mysteries, absolutely adored "A Dogs Purpose" even if it is a tear jerker.

From the reviews, I thought this book would be a similar feel good/feel sad, doggie love adventure. Oh so wrong..so very very wrong.
While on the outside, it is a doggie love adventure, on the inside is is an Andy Warhol skewed view. Almost like all Maple trees are trees, but not all trees are Maples. Who wants pine tree syrup on their pancakes? this books fits there.
I loved Lily, and liked Ted, but their adventure down the Octopus Rabbit hole, was waaaaaaayyyyy toooooooo weird for me.

I know.. my personal taste.

At about 5 hours in.. I was thinking.. OMG, is this one of the worst books I have ever read????? Put the speed at 2x, and zoomed towards the conclusion, and "hopefully' the reward for sticking it out to the end.

so.. either don't even buy this book.. or if you do, or already have.

the reward comes about an hour before the end, and definitely pulls at all the heart strings, and is what all the reviews are about.

And as many other reviewers mention.. have tissues at hand.

I found myself almost sobbing, tears streaming down my cheeks, and feeling..
ah..so this is it..

ie.. the end MAKES SENSE>> and validates the trip to get there!!! but man o man, it was a long windy road to get there.

Be prepared for tears

As a person with an eleven year old dachshund I found this store extremely difficult to listen to, yet I could not stop. I totally understand the love and devotion Ted had for his dear Lily. Letting go is so painful. One of at the cruelest things is in life is the fact that a dog’s life is just way to short.

This book is amazing. Maybe because I am a singleton and doggy parent - but this book made me FEEL. I had some laugh out loud moments and some sobbing - but I will definitely be putting this in my top 10 Audible books!

Where does Lily and the Octopus rank among all the audiobooks you’ve listened to so far?

Out of all-time audiobooks....in the top ten. Out of audiobooks I've listened to this year, in the top five.

What was one of the most memorable moments of Lily and the Octopus?

I can't say, because it would give away part of the ending. You'll know it when you get to it, and actually could probably guess it's going to be the outcome all along. I'll admit I shed a real tear or two.

His performance is excellent! He had just the right sarcastic, detached tone for Ted's narration, though as we learn as the story progresses, that detachedness is hiding some very deep emotions, which Urie also conveys perfectly. I thought in the beginning that his narration style might be a little too...aloof. But then I realized, that is actually Ted's voice. He tries hard to be unemotional, to deny how he really feels so as to avoid facing truly painful situations in his life, and Urie's narration really does convey that very well.And his Lily voice is THE! BEST! Exactly how a small, excited-about-everything dog would sound. I often found myself replaying her lines and even shared one with my FB friends, it was so funny. (Thanks, Audible Clips!)

If you could rename Lily and the Octopus, what would you call it?

Oh, I'm bad with titles. I used to work as a ghostwriter--writing entire books--and could never come up with titles on my own. And I think Lily and the Octopus is such a great title! It conveys not just an important part of the plot but Ted's refusal to focus on his own feelings, instead projecting them onto Lily and her octopus; though the story is really about him, he makes it all about them instead. Do I have to change the title? :)

Listen to this book! You'll laugh, you'll cry, you'll feel very satisfied at the end. What more can you ask for?

If you are a dog owner this will absolutely pull at your heartstrings. It's an easy to listen book that you won't want to finish. I loved the narrator's interpretation of Lily's voice and found myself spontaneously smiling and laughing as I listened to the story. A great summer book.

It's in the narration

Yes. Although the 2nd half was a little too "life if pi" fort tastes, I cried in my car in portions.

The author and narrators emotional connection with Lily

What does Michael Urie bring to the story that you wouldn’t experience if you just read the book?

At the start, I didn't like Michael's lily. As I continued to listen, I realized: yes, yes, that is my enthusiastic puppy! "Chicken and rice!"

I can't say without a spoiler but I almost didn't get this book . I knew and didn't want to experience....the best and the worst part.

Nope. Rent it and trust that the ending will be your reward.....

A sad but uplifting story

I loved the narration of this story, it really brought the story to life. I highly recommend this book.

If you love a dog, or have ever loved a dog, you must read this book. I laughed, cried, laughed some more and shed much eye rain. Now I need to go hug my dog and never let her go.

OMG. I CAN RELATE!

Would you listen to Lily and the Octopus again? Why?

Ive had dogs for the last 25 years. They have been recues thru fosters. I rescued a 7yo black and tan short haired min. dachshund in the mix. He became my anchor. My North Star. He was an incredible dog with soul and true heart. He set the standard for which all dogdome must reach. I loved him. I mean...LOVED him. I picked him because the photo from humane society captured the nobility and depth of the breed. Ive had other dogs since. But, my dream is to have one other dachshund......never to replace him, but to honor him...before I get too old and have to put his life in a "will". I felt this story in my heart. That dog made me more than human. Having to decide on when 'enough was enough' was a heartbreaking experience, and still brings me too tears when I remember holding him during those last seconds of euthanasia. Well done Lily. Well Done.

Heartwarming and funny. Made me laugh and cry. This is a story of a love so pure between a man and his dog. A must-read for dog lovers everywhere.