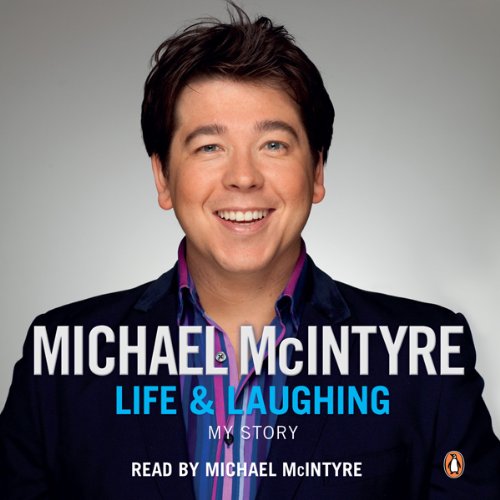 The best-selling audiobook Life and Laughing: My Story is written and narrated by one of Britain’s most loved comedians, Michael McIntyre, who gives an honest and hilarious recount of his incredible life. His memoir tells the tale of his life from childhood endeavors, his entry into the comedy scene and his brilliant rise to the top. He details his struggles and achievements, wildly funny attempts at romance, as well as the eccentric characters in the stand-up scene he has met along the way. His autobiography is laugh-out-loud, joyous listening. Available now from Audible.

Michael McIntyre has become Britain’s biggest comedy star. His debut stand-up DVD, Live & Laughing, was the fastest selling of all time, only to be eclipsed by his second, Hello Wembley, which sold over 1.4 million copies and was the 2009 Christmas number one. He hosts his own BAFTA nominated BBC1 series, Michael McIntyre’s Comedy Roadshow, and won the British Comedy Award for Best Live Stand-up in 2009 following his record breaking 54-date Arena tour.

But how did he get there? Michael reveals all and gives a hilarious performance in this audio edition of his remarkably honest autobiography. His showbiz roots, his appalling attempts to attract the opposite sex, his fish-out-of-water move from public to state school, and his astonishing journey from selling just one ticket at the Edinburgh Festival to selling half a million tickets on his last tour - all are revealed. Michael’s story is riveting, poignant, romantic, and above all, very, very funny.

I expected an interesting story with some funny bits. I think this is better than reading the book yourself as you get to listen to Micheal himself. While the book covers some sad and hard times in his life it is not depressing but very funny. He is also able to convey his feelings and emotions for both the sad and happy times to give you an idea of how he felt and what he was going through. The book had me in tears frequently, some tears off sadness but mostly tears of laughter. Fortunately I was home alone listening so no problem for the times when I just couldn't hold the laughter in.
He also gives the rest of us an idea of how hard it is to become a success in comedy, you don't just walk into a club and start telling jokes and bingo your famous. I've often thought that people in showbiz must all have big egos just to get up on stage and assume people want to see / hear them. I've never considered that they want to make us happy by performing or that their disapointment at lack of success might not be purely financially motivated.
I hope Micheal has many more years of entertaining ahead of him and that he has plans for further books.

He is a very funny man and if you have seen him on tv and like him then you will love his autobiography. His narration is brilliant.

Some laughs and some tears, a good listen

I loved this audiobook. Have become a fan of Michael McIntyres comedy and found it a really interesting story of how he got to where he is today. It is not a book of all laughs, I had tears at times, but was an inspirational story by someone who has faced a lot to get his success. Read brilliantly by Michael himself. Would recommend.

What did you love best about Life and Laughing?

Was great fun. I found his experiences to be very interesting and found his outlook to life refreshing.

What was one of the most memorable moments of Life and Laughing?

His teenage years and his start in the standup circuit....

Have you listened to any of Michael McIntyre’s other performances before? How does this one compare?

I started following Michael Mcintyre after this performance.

BEST Narration of any audiobook...ever!

Would you listen to Life and Laughing again? Why?

Absolutely would listen to this again. The author/narrator has such a wonderful outlook on life, he can find humor even in hard times.

What was one of the most memorable moments of Life and Laughing?

I love how McIntyre opens the first few chapters by chiding the listener for being "too lazy" to read the book for themselves; there are other comments that he makes while reading that seem to be spontaneous as well. The delivery is so natural, so fresh and authentic.

I listened to almost half in one sitting, then the rest the following day.

If you like Michael McIntyre you'll love this book

Anyone who likes Michael McIntyre will enjoy his wry view of growing up and the starting of his career. It's told with with warmth, truth and humour.

He told the story with humour and the same sort of observations which make his shows so funny.

I laughed out loud!! several times!!!

Would you listen to Life and Laughing again? Why?

Yes, ive already listened to it twice. you always pick up funny parts you may have missed the first time!!

so many....when his grandmother was telling his wife he takes massive sh**

Love this man. He is the only one since Robin Williams that can make me laugh til I cry. Michael’s is a wonderful story of love and the undying will to succeed.

Going to New York mid February. Had I known that Michael was playing Radio City Music Hall the first of February I would have booked an earlier trip so that I could attend his show.

It is somehow easier to understand how he creates his humor after learning about the arduous path he followed, honing his craft.

Completely enjoyed this amazing 'memoir'!!!
Laughed, cheered, and hoped for him though out...which strikes me as funny because we're already enjoying his immense success...we know he over-came. Loved it and well done, Michael!