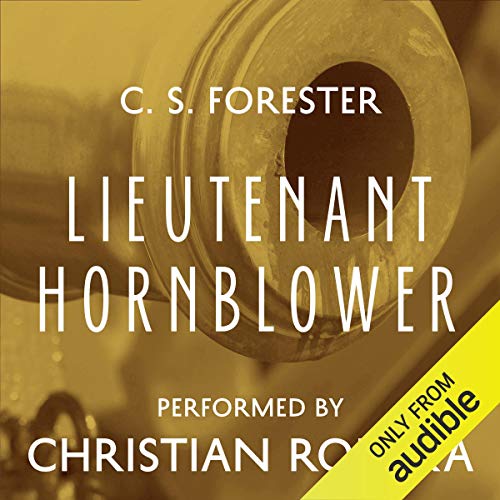 Having now paid his dues as midshipman, Horatio Hornblower returns as a newly promoted Lieutenant, in the second instalment of C.S. Forester's beloved naval series.

In this new adventure, Hornblower is overjoyed to discover his next task is to serve aboard the mighty HMS Renown. After witnessing some unsettling scenes however, he soon finds himself struggling to serve under the captain, James Sawyer, whose unsound mind leads him to treat his crew with extreme suspicion and contempt.

As talk of mutiny is abound, the tension rises and Hornblower is forced to make impossible decisions in an effort to unite the crew and avert further disaster by defeating the Spanish.

Introducing a much-desired element of romance to the series, Horatio encounters the beautiful and seductive Maria, who sends him on an altogether different but equally enticing escapade.

Hailed by the likes of Ernest Hemingway and Sir Winston Churchill for being 'admirable and vastly entertaining,' C.S. Forester became a hugely influential 20th Century author.

Born in Cairo, raised in London and buried in California, the metropolitan writer experienced huge success with his Horatio Hornblower series as well as with his later works, The African Queen and The Good Shepherd.

His literary genius is perfectly encapsulated within this endlessly entertaining narrative, and his heroic protagonist draws us in to another titillating journey through the Napoleonic wars.

Christian Rodska is an English television and voice actor best known for his role in the 1970's series Follyfoot.

From the The Monuments Men and The Eagle of the Ninth to The Likely Lads, Z Cars, The Tomorrow People, Coronation Street, Bergerac and Casualty, his extensive and diverse acting career has led him to become a highly solicited radio and audiobook narrator.

I grew up reading about Horatio Hornblower in the Saturday Evening Post. How I waited for a new story to arrive. Later, I purchased the books and read and re-read them.
How delightful to be able to listen to them now. To visit scenes not well remembered and have my memories renewed. It's almost like a family reunion.
Hornblower is the most dashing cousin a girl could have. He's brave and ruggedly good-looking and inspires the most romantic dreams. Unfortunately, he is in love with his ship ... but I have never minded playing second fiddle.
I am in my second listening now. The first a hurry to catch the story, the second to enjoy more of the flavor and character development. The third will be just to enjoy a story well written and well told.

Hornblower off to the Caribbean

This book was written in 1952 and is different from the prior books in that the story is told from the view point of Lt William Bush rather than from Hornblower's. The story begins with Lt Bush coming aboard the ship as a new officer and is meet greeted aboard by Lt Hornblower. There are determining which Lieutenant is senior by date of rank when Captain Sawyer comes aboard and accuses Bush of deliberately boarding the ship ahead of him. Turns out that Hornblower is the most junior (5) Lt and Bush is the number 3. So begins a voyage to the Caribbean with a paranoid schizophrenic Captain. The trip shows what power of life and death the Captains had in those days. There is lots of action both ship and land fighting as well as seaman skills. The book also goes to demonstrate what leadership skills and ability are needed to lead men. Christian Rodska does a great job narrating the book. This is a great story and has a bit more meat to the story than prior ones. Looking forward to reading the next in line.

My title says it all. This is Hornblower at his most swashbuckling. The narrator, Christian Rodska, is quite superb, as usual.

Great stuff if you like naval warfare under sail.

Where does Lieutenant Hornblower rank among all the audiobooks you’ve listened to so far?

The historic frame is great. The story itself is predictable but that doesn't matter since the 'how' is more important then the 'what'.

When I first started listening to Lieutenant Hornblower, I didn't like the crazy Captain abusing his men and was concerned this was either going to spend most of the time with his abusing the crew or turn into Mutiny on the Bounty. But Forester quickly remedied the situation in such a way that the backdrop of "mutiny" was there yet the story was able to continue with only a subplot involving what had befallen the Captain.

In the end, I really enjoyed the story and the insights into the characters. This is my first time experiencing Hornblowr and Bush together as I've never read the books nor seen an episode of the show based upon the first several chronologically and I am "reading" them in Horatio's chronological order from Midshipman forward and this is, of course, the second book chronologically speaking.

I still love Captain Jack Aubrey and Dr. Maturin better, but these are quite excellent.

Worth Considering for Patrick O'Brian Fans

If you've exhausted Patrick O'Brian's Aubrey-Maturin series and miss tales of the British navy in the 18th-19th centuries, then the Hornblower books seem to be a worthy way to get your fix. The main character is appealing and the naval arcana is well-told, but this book lacked the sly social commentary that lace the O'Brian books. Nevertheless, it's a series I shall continue with. Excellent audiobook narration, with a variety of upper and lower class British accents delineating the characters.

If you could sum up Lieutenant Hornblower in three words, what would they be?

Not sure but an excellent narrator.

Order the first in the series after hearing this one.

This book has always struck me as an odd one in the series; not bad at all, just odd. Told more from Bush's point of view almost, or certainly focused more on him. I suppose to get you ready for Bush as the best friend.
I didn't like the narration quite as much on this one, as the characterizations slipped a bit between Bush and Hornblower causing a bit of confusion, but not anything to cry over.
A solid part of the series though, and well read all in all.

This book is another entertaining book by this author, and well read. I use these books to keep my interest while driving, and have not been disappointed.

The Hornblower character is inspirational. Grace in adversity. The narrator is perfect. The stories exciting.

At first I was not sure if the style if another persons view was good buy it put a good an sometimes even exeltnt perspective on things. Well worth reading