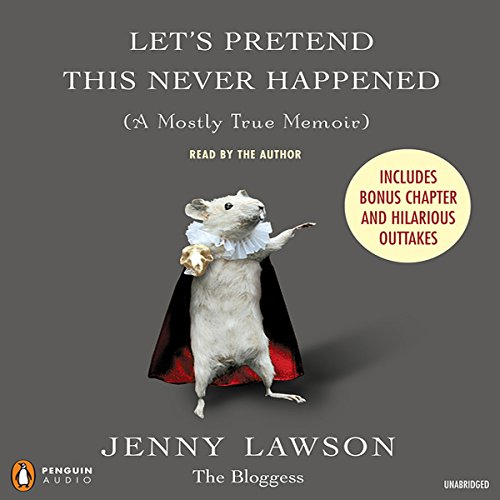 For fans of Tina Fey and David Sedaris - Internet star Jenny Lawson, aka The Bloggess, makes her literary debut.

Jenny Lawson realized that the most mortifying moments of our lives - the ones we'd like to pretend never happened - are in fact the ones that define us. In Let's Pretend This Never Happened, Lawson takes listeners on a hilarious journey recalling her bizarre upbringing in rural Texas, her devastatingly awkward high school years, and her relationship with her long-suffering husband, Victor.

Chapters include: "Stanley the Magical, Talking Squirrel", "A Series of Angry Post-It Notes to My Husband", "My Vagina Is Fine. Thanks for Asking", and "And Then I Snuck a Dead Cuban Alligator on an Airplane".

I Was Totally Charmed By This Wacky Memoir

Jenny Lawson had me from the moment she started in on her rural Texas childhood with a demented taxidermist father and a mysterious &quot;pet&quot; called Stanley the Magical Squirrel. Anyone who's spent any time around a dysfunctional family will appreciate Jenny's harrowing tales of Thanksgiving disasters, rattlesnakes, bickering with her husband about zombies, and fending off vultures with a machete. I loved this on audio quite a bit more than in print; I was totally charmed by her wacky singing of chapter headings and her ad libbed demands for &quot;more cowbell! This recording needs more cowbell!&quot;

If you could sum up Let's Pretend This Never Happened (A Mostly True Memoir) in three words, what would they be?

What was one of the most memorable moments of Let's Pretend This Never Happened (A Mostly True Memoir)?

Jenny Lawson's reading of her own memoir.

The best part of the audio book was listening to her reading it.

Made me laugh constantly.

Zany family stories that give the reader a glimpse into the authors life but more importantly, it made me laugh out loud.

How the Bloggess almost made me crash my car!

Oh, I do so adore The Bloggess! She has the most amazingly twisted and wonderful way of looking at the world that I’ve ever encountered. And since the audiobook is narrated by the woman herself, it makes the book that much better. She swears! She screams! She has silly asides! And to cap it all off, she has out-takes at the end! My only problem listening to this book is that I listen while I’m driving (I should have known better, probably), and there were several times I feared for my life, driving down the road with tears streaming, face contorted in laughter, afraid I’d crash the car at any moment. She’s just that damned funny. BUY THIS AUDIOBOOK!

I saw all the high reviews this book received and I believe it was on Oprah's list so I was convinced this was going to be a great book. There was some humor that I enjoyed but I kept waiting for it to get better but it didn't. I even downloaded another book and came back to this one thinking it was just me but it still wasn't catching my attention as I had hoped, then... As she is describing her fears during her pregnancy and mentions in a negative tone "what if my baby is born a republican", I just couldn't stomach it any longer. Regardless of political views, it's all we hear anymore and the country is already so divided and this just solidified my feeling that this book just isn't for me.

Forced... by someone who thinks they are funny

Sooo, I kept listening, it came highly recommended...but she definitely thinks what happened to her was hilarious... where it was sort of just a mix of mildly entertaining and out of the ordinary. Hard to listen to as someone coming to the book without reading her prior works... I couldn't finish it. But if you liked the blog maybe this is more for you?

Super fun, bright and refreshing. Jenny Lawson is like your best friend/alter ego with no filter, ADHD and a blogging problem who says the things that you are embarrassed to even think about. I loved every minute of it.

Actually, not for fans of Sedaris and Fey

I *really* wanted to like this book. Maybe diehard devotees of Jenny Lawson's blog might like it more than I. I thought some of her essays were great, but couldn't stand an entire book of her. It was just... too forced.

Has Let's Pretend This Never Happened (A Mostly True Memoir) turned you off from other books in this genre?

Would you be willing to try another one of Jenny Lawson’s performances?

If you could play editor, what scene or scenes would you have cut from Let's Pretend This Never Happened (A Mostly True Memoir)?

I would have trimmed a lot from the book as a whole. Jenny is witty and touching, but her sarcasm and schtick wore thin on me after the first half of the book. Her journey of self-awareness feels contrived and forced--- as if her editor told her that she had to summarize what she learned and how she grew from each anecdote. Her essay about miscarriage and living with chronic illness was really powerful and moving. Her father is fascinating, as is her upbringing. I would have liked to hear more about her parents.

And whoever told her to SING the chapter titles should be fired. That was just cringe-inducing.

Jenny's no Sarah Vowell or Tina Fey but the story is an enjoyable romp through her life. Not a rib splitter but rather a light, easy story with some fun and humorous interludes. This is one of those books that I can't imagine being read by other than the author and Jenny does a fine job of narration. I'd give it a 3.5 overall if that were allowed.

If you could sum up Let's Pretend This Never Happened (A Mostly True Memoir) in three words, what would they be?

What was one of the most memorable moments of Let's Pretend This Never Happened (A Mostly True Memoir)?

I can recite the whole thing from memory.

Which character – as performed by Jenny Lawson – was your favorite?

I'm gonna have to go with her performance of Jenny Lawson, aka "the Bloggess." She nailed it.

I'm actually legally dead, having died of laughter. In lieu of flowers, buy this book.

This book is funnier than the Bible.

Keep it as a blog

We voted this for book club and half of the ladies asked for their money back. I can see her stories in blog snips but not a book. It feels like she’s trying too hard to be funny and edgy. I can’t finish the second half - her voice is too high for audible and the other ladies in book club said the second half was terrible. Why does she sing the chapters? It hurts to listen. The squirrel story is really the only thing worth reading. Sorry Jenny...

..her voice is kind of annoying.
If you can ignore the fact that she awkwardly and loudly sings the name of every single chapter, then it's a good book full of fun stories.

horrible ... there are no minus stars to choose ... not worth the egort of listening to