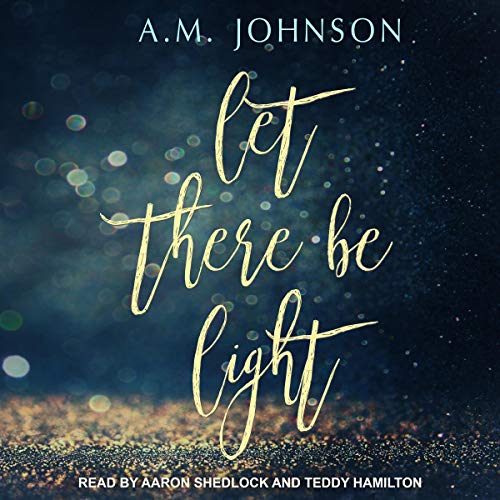 Let There Be Light

His world was water and rhythm. Hard work and drive kept Royal O'Connell one step ahead of his competition. His spot on the swim team, keeping his scholarship, was the only plan that mattered.

His world was ebony and ivory. Natural talent and ambition set Camden Morgan apart from the other music majors. His dedication scored him a full ride.

Normally, their paths would have never crossed...but when Royal meets his best friend's new roommate, his big plan and Camden's controlled environment faces a variable that could destroy it all: attraction.

The world they live in had no room for error. That undeniable pull between them was dangerous, and neither one of them could've prepared for the choice they'd have to make.

Love isn't always an easy road, and when everything they've worked for is on the line, they'll have to decide if being together is worth the risk.

I think this is a great book for for someone delving into MM for the first time. It is a sweet love story with light sex scenes. The story is a bit of a slow burn between 2 college students who have very limited to no sexual history. The attraction between them is instant and they have a couple friends who help them realize its no one else's business who they love. Camden's parents are awful but Royal's parents make up for it in spades!! His family is exactly the way all families should be. There is a homophobic scene and I have to say I love the way it was handled. The ending was what moved this book from 3.5 to 4 stars for me, it was sweet and stole my heart! Also I'm 99% sure I know what the next book is going to be about because of the clues and little hints and I can't wait! The narration was PERFECT! Teddy & Aaron were the reason I pre-ordered this audiobook. I love both of their work and they were perfectly cast for Camden and Royal. These are two narrators that I purchase books based on them not the author. This time I was lucky though because I love AM Johnson's book too!

An angsty, m/m coming of age love story that will stay with you for a long time

AM Johnson is an amazing author that draws such beautiful imagery that you feel like you are watching a movie not just listening to her book. You can feel the pain that Camden feels and how he channels it into his music. You can feel the love Royal has for his twin and his family. When he first laid eyes on Camden it makes me sigh. Always love Teddy Hamilton and Aaron Sherlock and they were well cast as Royal and Camden. The vulnerability and uncertainty is there in their narration. The love scenes are not as explicit but totally beautifully written. The story is focused on their budding romance and the discovery in itself. Definitely worth a credit!

The story was sweet and the connection between the main characters was sweet. I enjoyed it, but it didn’t blow me away. The sibling connection was great. And their parents are the kind of parents everyone should have. They were awesome. Camden, on the other hand, doesn’t have it so easy and he is a quiet kind of guy but Royal really brought him out of his shell again it was a sweet story and I enjoyed the journey. If you are new to MM this is the story for you. I am hoping we get Royal’s sister and best friend I think that will be an interesting story because of her medical stuff. I would like to see how that affects her. I LOVED THE NARRATION! Can we please have Aaron Shedlock and Teddy Hamilton do all MM books from now on? Can we please, please?!?

ive listened to 100s of romances an this has got to be my favorite so far Aaron an teddys voice together is like gravel in the ocean on a stormy night this book was so intensively romantic and shows that there is a deepness to silence. I loved it even the words like a slow but deep melody.

NOT a ggod story and obviously just written for the next book, and SOOOOO Obviously written by a woman, and just one more bit of proof that women should NOT write gay romance novels..... honestly what a joke

The story of Royal and Camden. Such a sweet heartwarming romance. Royal is a twin, at school on a scholarship for the swim team and meets his teammates roommate. Camden, he's a very introverted isolated piano genius. These boys grow so much, it's such a sweet story I enjoyed it very much the narration was so good.

I loved this book so so much. Royal and Camden are beautiful characters and their journey is wonderful and painful. I would recommend this book to everyone who loves a good love story. Teddy Hamilton is one of my favourite narrators and Aaron Shedlock is good as well.

I don't know if I have the right words to explain how much I enjoyed this book. The dual narration was spectacular. I felt every bit of whisper that was spoken. Teddy Hamilton and Aaron Shedlock should always do books together. I will happily and greedily devour any book they do in the future together. This was an absolutely beautiful book written by A. M. Johnson and TH and AS did a wonderful job bringing it to life.

I love getting to take a look at the O'Connell twins all grown up! This first book in the Twin Hearts series features Royal as he enters college. A champion swimmer, he could have gone anywhere but chose to be near his sister Indie and there he met his heart. Only it's not who anyone expected. Camden is a talented piano player whose whole life revolved around being the best and appearances. When he told his parents of his desires, he was quickly tamped down. But now apart from his parents, he finds himself drawn to Royal. Can these two find their happiness? I enjoyed this book of coming of age, coming out and acceptance of who you are. It's a slow burn, sweet and tender with a few bumps in the road. I enjoyed getting back to see the O'Connell clan with Declan, Paige and a cameo by Liam! Plus that college life always brings a nostalgic feel. Teddy Hamilton and Aaron Shedlock bring it all to life with their narration. Hamilton is the perfect Royal. He has that confident feel, and lets us know he is comfortable in his skin. Camden is less self assured, and Aaron Shedlock picks this up with his performance. We can feel Camden's uncertainty and the change in him with the inflections Shedlock uses. This is an incredible narration team.

These Two are Something Else - this book caught my heart from the word go. I am harder and harder to please these days so very glad I tried AM!!! Please give this a shot! You won't regret it! The narration is beautiful by both narrators! These two are among my favorites! AM, If this is one of your first forays into male/male, I approve - well done - I am a heterosexual married woman, but LOVE IS LOVE and this is a wonderful visceral tale of Love. Waiting for your next book like this - or to continue their story!

I have to admit: I totally bought this audio because Teddy Hamilton is one of the narrators. And he did a wonderful job! A different story is how Aaron Shedlock narrates. He has this way of press-breathing the last word of a sentence and I had difficulties to concentrate to the story while waiting for him to do so. Another thing is, when you have quotes in another language, like here in french, you should ask someone how it is spelled. If I hadn't read the story too, I wouldn't have recognized the language... The story itself is beautifully written, an intense story of coming out with loveable characters.

A story full of warmth with one excellent narrator

I agree withe the other review. Teddy Hamilton did a great job as always but it really takes some time to getting used to (or better: ignoring) the other narrator. He always presses out the last word of each sentence. I guess it's supposed to be sexy. To me it wasn't. I enjoyed the story though. It created a comfortable and calm atmosphere. The story is like the two guys: calm, cool, collected. No drama or overboarding cheesy emotions yet full of love and warmth. Not too shallow but not too deep either. Another thing I also enjoyed was that story didn't revolve around sex like most stories seem to.