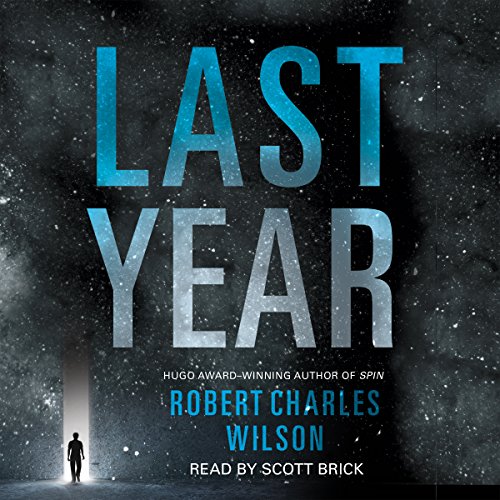 Two events made September first a memorable day for Jesse Cullum. First, he lost a pair of Oakley sunglasses. Second, he saved the life of President Ulysses S. Grant.

In the near future of Robert Charles Wilson's Last Year, the technology exists to open doorways into the past - but not our past, not exactly. Each "past" is effectively an alternate world, identical to ours but only up to the date on which we access it. And a given "past" can be reached only once. After a passageway is open, it's the only road to that particular past; once closed, it can't be reopened.

A passageway has been opened to a version of late 19th-century Ohio. It's been in operation for most of a decade, but it's no secret on either side of time. A small city has grown up around it to entertain visitors from our time, and many locals earn a good living catering to them. But like all such operations, it has a shelf life; as the "natives" become more sophisticated, their version of the "past" grows less attractive as a destination.

Jesse Cullum is a native. And he knows the passageway will be closing soon. He's fallen in love with a woman from our time, and he means to follow her back - no matter whose secrets he has to expose in order to do it.

I didn't think I would like it, however I had spent the credit so I better at least try an hour.
and then I was hooked. not only is the writing interesting but the concept was even more so. the ethics and philosophy behind time travel, corporations, how science is used, when people think they are doing good but are actually doing harm were all very interesting and emails topics to me. I wanted to go deeper into it.

the lighter parts, ie. there sharing of future music with ppl from the 1880s was so enjoyable. I would have wanted to hear more on it. the simple use of language change from the 1880s to now was also so fun to see as the main character and Elizabeth interacted as well as others.

Scott Brick did an amazing job narrating. one of my favs.

I'm giving it 4 stars, because... I want more. and the ending left me hanging. sequel?

Don't know if I read it wrong or what but this was not what I expected. I thought I was getting a story about time travel into different versions of the past.
This story is from the perspective of one of the people in the past where a time portal has been set up and a city has been built around it. There is no time travel taking place. Only the interaction of people from the future with people from the past in a specific setting for a specified time.

With that said... This was an excellent read. Enjoyed the story and the premise was good and believable.

The narrator did a good job as well. Well written and well read.

Ughhh... this book was great... Slow at times but fast at others it would have been nice to have some closure no spoiler alerts but there really is none

It’s ironic that what is probably the least likely of science fiction tropes, time travel, also offers some of the richest possibilities in the genre, with the possible exception of alternate history, which runs along the same lines but can only go one direction.

Robert Charles Wilson has created in this latest book a future universe in which time travel to the past has become possible, though the source of this boon is mysterious and debated. Some believe the mirror-like path to the past was created by a combination of academic and industrial knowhow. Others suspect that humans from the far future brought the technology with them and those future humans are now captives in Area 51.

In any case, the window is now in the hands of a corporation which runs Futurity City. The corporation profits in multiple ways. People from the current timeline can pay a hefty fee to travel back to the past to spend time there. The man who runs the city also works with the “locals” in the past, promising them modern technology such as medical cures for five years of access to that timeline. Although it’s thought that the timelines being visited are alternate realities, so that changes can’t affect the future, it’s been decided that five years is the maximum allowable time to avoid creating distortions in history. Through these contacts a great deal of gold from the past also manages to make its way into the corporation’s coffers.

Jesse Collum is a security guard, a local working in Futurity City, who has been assigned guard duty for a visit from President U. S. Grant. He manages to stop a gunman who has brought a weapon from the future, something forbidden, to attempt to assassinate Grant. An investigation into the origins of that gun takes Jesse into his own past in San Francisco where he learns some ugly secrets about Futurity City as it begins to crumble.

Wilson has written some amazing action scenes into this book with a broad variety of heroes and villains, some from the future but many from his own time period.

The setting allows Wilson to explore social differences between the 1870s and the future. To Jesse’s eyes the future does not seem much better with the exception of medical advances, and to many other locals the future, with it’s mingling of races, feminism, and gay marriages sounds like a horror. So the reader is also challenged to face and assess modern progress with a “ripping read” as they say for a reward.

What Westworld should have been

I've thoroughly enjoyed this novel.
I've been contrasting it with Westworld (the movie and the series) in my mind, and in my opinion this novel is in its own class. While it deals with similar themes, it does so with a breadth and attention while being less showy and pretentious, and taking the time to build its characters to have much more depth than Westworld. While both have unpleasant psychopaths as characters, here we have only a relatively minor one.

It does start pretty slow, but it really grips you. Also, while I haven't checked every detail, it seems to be meticulously researched. As all good science fiction does, it takes its basic premise (unlikely as it seems) as a given and explores the characters reaction to it, and more - the response of our own culture and of the past culture to it.

I also liked that the story is self contained, I'm not sure much more could be gained by expanding it into a series.

I RCW keeps writing for years to come

I discovered Robert Charles Wilson some 25 years ago and have read all his books--I started with Memory Wire (loved it). It's a pity his earlier books aren't on audio. Some of his books I like and some I love, but he's about the only author (in any genre) who I can count on to at least deliver a book I enjoy, and when you read/listen to about 300 books a year, this is a pretty big deal.

This one I liked. It has his usual melancholy tone, characters fully developed, plot about more than action/adventure--though there is always that. He's always thinking deeply about something in his writing (technology, social issues, psychological issues, etc.) and then builds a story around it.

I appreciate that a piece of the story is always about a relationship--which is NEVER something stupid like insta-love and uses none of the horrible romance tropes.

Ok, I'm now going to listen to Bridge of Years, which I read in 1991 or so when it first came out. I recall liking that one very much...

the description about the story is not exactly how it ended up going. It could have been so much more with the storyline. But it wasn't. Really didn't like the ending at all. I wouldn't recommend wasting the hours it takes to listen to this story.

a book that reaches far beyond it's premise

As someone who can't stand most historical fiction, I was surprised at how engaging this book was. it's worth a try even if the synopsis doesn't sound appealing.

Suppose you could go back and change things and it didn't matter? What are the ethics of a time travel theme park? As always, Wilson explores the concept from the standpoint of human society interacting with something new. There's a solid plot and great characters here struggling with their own lives in the midst of the mix of old and new. What does our modern society look like to someone from the US just after the Civil War? How do our 21st century expectations fare in the era of the wild west? Come visit the past -- but best you get your immunizations first, watch where you eat, and stay on the marked paths.

As always, Scott Brick does a great job with the narration. No cliffhangers here. This story comes to a conclusion but leaves plenty of room for a follow-up. I look forward to that very much.

A Neat Concept But Poorly Executed

Would you try another book from Robert Charles Wilson and/or Scott Brick?

As for the author, I really don't think so. He takes what is a rather unique application of the "Alternate Universe" and bogs it down with extraneous details and rather boring plot developments.

The narration was good and unobtrusive, but it didn't blow me away. However, I don't think I would avoid the narrator to the same degree I will probably avoid the author.

What character would you cut from Last Year?

The wealthy proprietor, August Kemp, was pretty flat and unbelievable, making important decisions with no explanation of his motivation.

1.) It felt like really important details and explanations were missing… Perhaps edited out by the publisher? If that's the case, you can't really blame the author, but he really needs to find a new publisher.

2.) This is obviously the beginning of a Series, but, unless this introduction is seriously revised and reworked at some point in the future, I sure don't see that as being a successful endeavor.

Very good Reading from Scott Brick.
I really like his Style as he gives life to the Plot. The Plot itself is good but loses pace against the end.