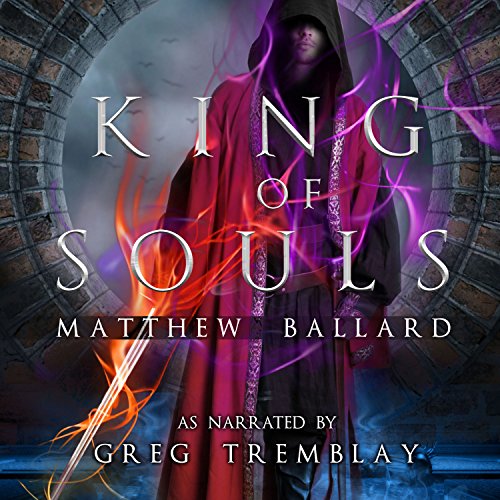 A new king reigns atop the Meranthian throne.

A powerful necromancer, Tara, leads a long lost race across the sea to Meranthia's shores. Shores that she last saw 2000 years in the past.

Ronan pushes his magical limits to the brink against a foe intent on creating an undead army and claiming Meranthia's crown for her own. During his epic journey, Ronan unlocks secrets of Meranthia's hidden past. Secrets of the human soul. Secrets that change his life forever.

As a avid fantasy reader, I really enjoyed this book. But overall the majority of the characters reactions to events and other characters actions is next to idiotic and childish. No one who can wield that much power would be such a chump. Other than that it was good.

This is the first review I have written for a book on Amazon/Audible. I am an avid reader; probably reading and listening to between 300-400 books a year. As such I can be pretty forgiving when it comes to relatively small errors/weak issues if the story is good. I also feel very strongly that if someone went through the effort to write a book and you didn't like it than leave well enough alone.

That said I felt that I needed to put my opinion out there to give others a data point when choosing to read/not read this book. I was very disappointed. The first book in the series was interesting and entertaining (all you can reasonably ask of a book in the fantasy genre), the main character(s) mostly fumbled their way to winning and came up with a last ditch desperate effort that won the day. That is fine, Ronan was thrown into a tough position before he was prepared or ready and managed to do alright for himself. This book however, finds the main characters in positions of great responsibility where they are supposed to be leaders and in Ronan's case the King, yet we see them running all over the place doing things that a proper leader would send subordinates to do and disregarding all the people they have a duty to lead. Every desperate situation Ronan, Danielle, and the other characters find themselves in are a result of poor decision making and a complete disregard for planning ahead, and ignoring important issues.

All in all I was disappointed in this book and would not recommend it to others. The trait of the main characters to "wing-it" and never have a plan for any situation are forgivable for individuals, however when the character (Ronan) is the King of a country and the consequences of failure are catastrophic it is unforgivable. This may be a bit of a rant, but the characters, especially Ronan do things they know are a dumb decision and yet proceed anyway.

Another fantastic performance of a fantastic story

Once again, Greg delivers a performance that brought the story to life!

I relistened to book one, shard Knight, just before I listened to this story, and the depth of characters in this book was astounding. This book introduced several new groups of characters, all with different dialects, and personalitites. I knew immediately when speaking who it was, and where they were from. The returning characters were delivered just as they were in the previous book, with a hint of wear and tear (which is to be expected after what they went through! seriously, read the first book! read them all!). Not once did I feel like the characters were recycled, or askew.

Without spoilers, I can say the story provided new ideas and places that were fresh and exciting. The story was well thought out, and never predicable. there were a few twists that I thought might happen, but not quite the way they did! The detail and love that the Matthew has put into these books is astounding. Each character felt full of life and complete, never shallow or one dimensional.

The character of Fizzle brought me pure joy, and I swear I have met Moira before....

I can't wait for the third book to arrive on audible!