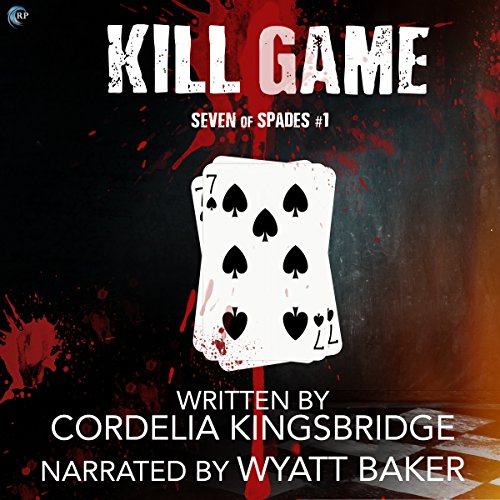 Homicide detective Levi Abrams is barely holding his life together. He’s reeling from the fallout of a fatal shooting, and his relationship with his boyfriend is crumbling. The last thing he’s prepared for is a serial killer stalking the streets of Las Vegas. Or how he keeps getting thrown into the path of annoyingly charming bounty hunter Dominic Russo.

Dominic likes his life free of complications. That means no tangling with cops—especially prickly, uptight detectives. But when he stumbles across one of the Seven of Spades’s horrifying crime scenes, he can’t let go, despite Levi’s warnings to stay away.

The Seven of Spades is ruthless and always two moves ahead. Worst of all, they’ve taken a dangerously personal interest in Levi and Dominic. Forced to trust each other, the two men race to discover the killer’s identity, revealing hidden truths along the way and sparking a bond neither man expected. But that may not be enough to protect them.

This killer likes to play games, and the deck is not stacked in Levi and Dominic’s favor.

Why haven't more books been released into audio???

I was a bit, okay very, hesitant picking this book up. On the one hand, I really wanted to listen to this book. On the other hand, after listening to the sample, which was bad - narration wise - I wasn't sure if I'd be able to listen to 8 hours of Wyatt Baker. So I let the book go. But over the months I kept coming back to it, I was drawn to it. So I figured I was going to give it a try anyway. And you know what - I'm so glad I did! The sample did not make this book any justice - at all. I loved this book and can't wait for the next one!

There's a serial killer hunting in Las Vegas, nicknamed the Seven of Spades. Why you might ask. They leave that particular playing card at each of their kills. The last thing homicide detective Levi Abrams need is a serial killer, closely followed by constantly crossing paths with bounty hunter Dominic Russo. Unlucky for him, he gets both. Add in a tanking relationship and dealing with the consequences from a fatal shooting and his life is a bit of a mess. A mess that does not need his growing attraction to Dominic. Or a bounty hunter set in catching said serial killer.

I like how both Levi and Dominic are so human. They are flawed, imperfect and they are people like you and me. They have issues and inner demons they fight. It makes them relatable and in turn the story more believable. I loved them as individuals, but even more together. They have chemistry that's off the charts and you can almost see the string that pulls them together.

This is definitely my kind of book. The suspense, the twists and turns. The mystery of it all. The thrill of the hunt. The flawed, real characters, the slow build of a relationship. Please just give me more! I'm waiting impatiently.

Like I said in the beginning, I had huge doubts about this book, about Wyatt Baker's narration. So no one is happier than me to be wrong. I loved this book, and everything about it. So the narration wasn't flawless - very few are. I would have loved a little more emotion and feelings from Baker. Just to have that extra layer, to connect just a bit more, because at times the narration felt a bit detached. However, that's most noticeable when you start listening. After a few minutes the story takes over and you are immersed and engrossed, the rest of the world disappears. So if you are able to listen to this book in one go those first few minutes will be erased from your mind, but when you need to start and stop when RL intrudes, those first few minutes are more noticeable and more difficult to overlook. Something that I always appreciate with narrators is the use of different voices for different characters, that always helps the listener to keep track if who’s talking and making the listen much easier and relaxing. Or well, in this case as relaxing as a hunt for a serial killer can be.

I loved this book a lot and I only have one wish - for the rest of the series to be released in audio asap, because the suspense of what happens next might just kill me.
Highly recommended.

A copy of this book was generously provided by the publisher in exchange for an honest review for Love Bytes.

Whoever chose the narrator did a disservice to the series and listeners. The performance is so stiff and robotic.

LOVED IT! LOVED! LOVED IT! So, I really liked this book. Why?

1. Great PLOT. A true thriller. A vigilante serial killer is slashing their way through Sin City’s baddies. Detectives Levi Abram and Martine Valcourt are on the case. And so is bounty hunter Dominic Russo, ex Army Ranger. Super well paced and interesting. For the life of me, I couldn’t figure out who the killer is. I still can’t since this seems to be a five book series. Oh god help me! I won’t be able to wait!

2. The CHARACTERS. Dominic, Dominic, Dominic. *fans self* This hunk of bad-ass is all sweetness inside. With a winning smile. And he’s HUGE. All over. He’s got problems such as a gambling addiction, and no plans for the future. I mean, one can only keep collecting twinks for so long.

Then there’s Levi. Krav Maga expert. Lean, mean, and not the most personable man. He looks down on the likes of bounty hunters like Dominic. So of course, these two are thrown together thanks to our serial killer. And while they only have one sex scene in the book together, it’s scorching hot. There’s other sex, but with other people. No, there’s no cheating aside from a kiss.

Another thing I liked about this book was Levi’s partner, Martine. It’s always wonderful seeing strong female secondary characters who take part in the story in roles other than mother, sister, ex, or BFF.

So, we have a host of characters, male and female. A serial killer of unknown gender. And a budding relationship. Can I just hope and pray that we have a female baddie for once?

This was a NTM narrator and while it took me a while to get used to his voice, I soon grew to love it and thought it was a perfect fit for these guys!! I’ve already picked up the next book in audio (although I’ve already read them all in ebook)!!!

You gotta listen to this book! I can’t wait until the last three of this five book series come out in audiobook!!!

Narrator and editor should be fired

I love these books, the story is amazing, but if I hadn't read them first this narrator might have killed them for me. Beyond the often wooden delivery he mispronounces words. There is zero excuse for that. If the narrator doesn't know the pronunciation, the director should, and if they don't, the editor had better. He pronounced carotid, carrot-id. Who doesn't know how to pronounce carotid?? I mean, obviously everyone connected to this production, but really? This was only the worst example of mispronunciation. I am desperately disappointed as this could have been amazing in audio.

I enjoyed this book. I like Levi and Domanic they ate a good match. I am into the Mistorey books lately. Good story and looking forward to reading more and getting more of their story.

oh I really loved the dual POV, mm romance, and mystery in this! immediately will be diving into the next book of the series.

I've waited until the whole series was available in audio before starting this one, and I'm glad I did. It has me intreigued, and knowing I don't have to wait for the next one to be released was worth the wait!

📖 Story comment: Good pace, likeable characters, intersting plot - and it's great to see a strong secondary female character. I like the developing relationship between Eli and Dom, and this has been a good "set-up" for the rest of the series, I'm even liking the "vigilante" seriel killer picking off his version of "bad-guys".

🎧 Narrator comment: I enjoyed Wyatt Bakers narration, his style reminds me of the old "Dragnet" Radio drama's - he has good timing, and it's easy to tell the characters apart, overall I enjoyed it and would happily listen to it again.

I enjoyed this book. great start to the series, made me want to keep reading.

(As always, my review is taking the genre into account for how it rates.)

This book was pretty good, it does end on a cliffhanger of sorts, I don't think that's a spoiler given the series title (the mystery isn't yet resolved). I'm definitely intrigued, I feel like I know who did it, but I want it to be someone else for satisfaction's sake. At any rate, a good use of red herring information and clue dropping, it kept me interested.

I appreciated that we got glimpses of the POV characters' lives without the mystery plot being left completely on the wayside. For a first book in a series, it was very nicely balanced between plot, intrigue, and establishing/developing characters. I also thought the author did a great job of filling the book with characters so the story didn't feel insular or superficial, but still let those characters be only side/background characters so the book wasn't overflowing with unnecessary details.

I liked the slower approach to building something between the main characters, though it definitely isn't a slow burn. I hope to like Levi a bit more in the next book, he wasn't a bad character and I did connect to him in some scenes, but compared to Dom I felt he missed a bit of heart.

The narrator was okay, no annoying voices, but not my favorite. As a personal choice issue, I didn't find the voice he chose for Dom fitting at all. I noticed he mispronounced a few more words than seems typical for audiobooks, but it wasn't anything too distracting.

If you liked this book, I'd recommend checking out the Shadow or the Templar series, it is another LEO and consultant series (though completely different set up) that I loved. Hoping this series improves as much each book as that one did.

I have wanted to read this series for a minute now but lucked up on a free audio so I took advantage of it.

I was engrossed in the audio, I enjoyed to narrator and the way he was able to switch his voice.

The mystery/suspense was intriguing and I think I know who the killer is buuutt I read the whole series to be sure. Off to Book two no audio but the ebook version.