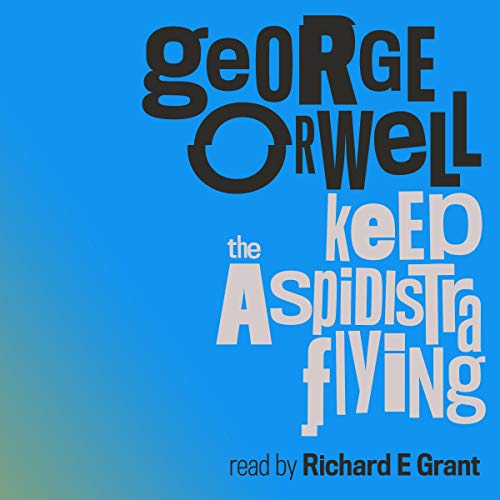 Gordon Comstock loathes dull, middle-class respectability and worship of money. He gives up a 'good job' in advertising to work part-time in a bookshop, giving him more time to write. But he slides instead into a self-induced poverty that destroys his creativity and his spirit. Only Rosemary, ever-faithful Rosemary, has the strength to challenge his commitment to his chosen way of life. Through the character of Gordon Comstock, Orwell reveals his own disaffection with the society he once himself renounced.

Where does Keep the Aspidistra Flying rank among all the audiobooks you’ve listened to so far?

At times certain wonderful books, by towering authors and read by notable narrators often end up with a rather dull effect. For 'Keep the Aspidistra Flying', narrated by the immensely talented Richard E. Grant, this is not the case. The atmosphere of Orwell's terse satire is fully developed in this dramatic reading by Grant, who manages to deliver character after character without loosing any of the pacing allowing the social and political underscore of the book to be fully experienced by the listener.

What was one of the most memorable moments of Keep the Aspidistra Flying?

Of the many painfully satirical moments in the performance to look out for is the exchange between Gordon Comstock and the french waiter at the country pub.- enjoy.

What a pleasure to listen to Richard Grant capture every nuance and drop of sarcasm in Orwell's great prose masterpiece, The book feels very modern in sensibility; the narrator is exceptionally brilliant and funny. It was really a delight.

On the extremely slim chance that he or his agent or someone responsible for casting audiobook narrators is reading this, please cajole Mr. Grant to record more audiobooks.

Gordon Comstock may just be the least appealing character in any book I have ever read. Whining, self pitying, grasping (of everything but money) he is almost completely devoid of human sympathy. At one point I nearly abandoned the book because he is such an unsympathetic persona.

Richard E Grant's performance is excellent. Just the right amount of self important sneer in his voice and just the right tone of undeserved and unappreciated privilege in his delivery. All round a very good audiobook.

You can't kill an aspidistra

What did you love best about Keep the Aspidistra Flying?

The scene where Gordon finally sells a poem and ends up blowing the money on booze and tarts. You can feel his hangover when he wakes up in jail. Gives me a headache just thinking about it.

Gordon's tenacity, although like everyone he ends up with his own aspidistra.

What does Richard E. Grant bring to the story that you wouldn’t experience if you just read the book?

If you have seen any of his movies you know what an amazing actor he is, in fact he starred in the film adaptation of the book. No one could have done a better job than Mr. Grant. Check out Withnail & I. "We've gone on holiday by mistake..."

If you could take any character from Keep the Aspidistra Flying out to dinner, who would it be and why?

Ravelston because he would pay.

Orwell said he wrote the book because he needed money. Quite ironic.

This book depicts the painful struggle of consenting to sell oneself to promote the aims of a corporation or institution. Much of the book is painful to read because our protagonist makes horrible mistakes repeatedly. Gordon needlessly hurts people who are close to him, both because he lacks money, and much more painfully, because he is constantly obsessed with his lack of money and his feelings of inadequacy that derive from his poverty. However, the book is not long, and left me feeling incredibly satisfied when I reached the end. The books ethical/moral implications are hard to pin down. Gordon finally finds stability and some peace by giving in to his hatred of money, and the reader feels very happy with his decision. Yet all this satisfaction we feel is from Gordon renouncing all he believes in, something that is epitomized by his powerful desire for an Aspidistra plant in his window so all the neighbors would see, even though Gordon spent the last 30 years of his life despising Aspidistras.

This is a perfect work by Orwell. The best novel I have read by him so far. The performance by Richard E Grant could not be better - he is the perfect casting for Gordon Comstock.

Be aware that this copy has a sound fault in chapter 7. There is about 40 seconds of skipping that make that tony section of the book inaudible.

Richard E. Grant narrated this book wonderfully. After just a few minutes I looked up all the other books that he narrated, since he had, in that short time, become a favorite. But technically speaking, this was the worst audible.com book I have ever had: "End of CD 3," "Beginning of CD 4," no break whatsoever between the last word of a chapeter and the announcement of the next chapter, almost as if they were one word. "Swordchapter 3" or "novelschapter 7' and so forth. Still, for all that I will probably listen again. It's a memorable story, I like to fall asleep to a book, and Richard E. Grant is a perfect narrator to read you to sleep like a kind and trustworthy uncle.

Gordon Comstock, an impoverished, angry literary slacker, fights against the "money world," his only weapons being his slim output of poetry and his rage (largely inner). Gordon is so wretchedly unhappy that the reader wonders that he doesn't cut his own throat. He is so enraged that money controls the world and all aspects of life that he cannot bring himself to accept a fairly well paying job even though it could be his for the asking. Anyone who knows about George Orwell and his opinions and principles can easily discern that Gordon is a stand-in for him. Though Orwell's point in the novel is sound and reasonable, Gordon's negativity and gloom are so abysmally deep and as to verge on being a one-note samba and therefore off-putting. But at the end, the other side of Orwell emerges -- the Orwell who has a an abiding affection and admiration for ordinary English men and women -- breaks through, and life eases for Gordon and his long-suffering girlfriend Rosemary.

read this years ago and remember it not being too good but Grant's narration is enjoyable.
when Merry War movie adaption for this came out the screenplay fixed much of what's wrong with the book.